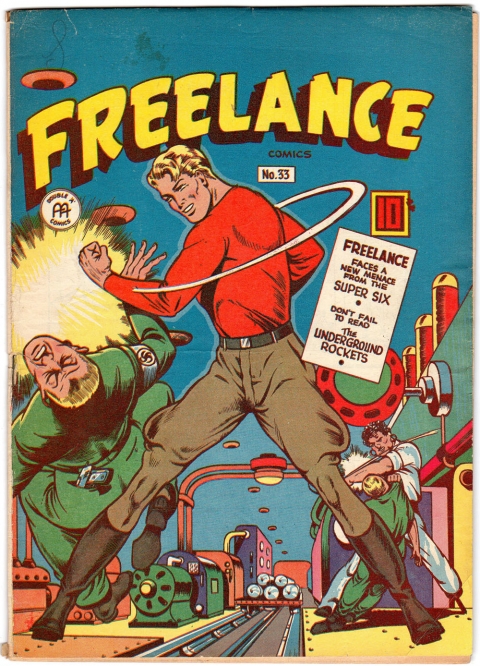 It’s been a while since I shone the Spotlight on a “Canadian White” and it took a really cool happening to make me realize my oversight and allow me to set things right.

The cool happening is a 75th Birthday celebration for Canadian comics taking place in Niagara Falls this coming weekend. The event is being held at Big B Comics on 6465 Lundy’s Lane, Niagara Falls, Ontario at 7:00 pm on Saturday June 4th. We hope to see you there!

In honor of the event I thought it fitting that I pick a “White” this week so without further ado I present this week’s Undervalued Spotlight,Freelance Vol. 3 #33.

It’s funny but I asked Ivan Kocmarek for a little help picking this week’s book and his answer was simple, pick them all. Spoken like a true scholar of the period!

I wanted to get this pick right. I wanted it to be an approachable pick that offered many positives. After much deliberation I chose Freelance Vol. 3 #33, for several reasons.

The books boasts one of the iconic Freelance covers, this cover is often used on websites referencing the character and the time period and it really is a great cover, check out those post war Quasi-Nazi villains.

Freelance is the 4th title to come out of the “Whites” era; Better Comics, Robin Hood and Lucky Comics were the only titles to precede it. Ted McCall provided excellent scripts and the Ed Furness art is top notch. Ed Furness was the mainstay artist for Anglo American Publishing; he drew Freelance from the very first issue on.

This era of Freelance also delivers a couple of things most “Whites” don’t, accessibility and affordability. Freelance issues in this era trade for very reasonable sums: a CGC 8.0 of #28 recently sold for $202 while a CGC 9.2 #31 sold for $225. See what I mean about undervalued. These later Freelance issues are also available; I’ve seen a several copies of #33 over the last couple of years.

Freelance Vol. 3 #33 is an accessible and affordable opportunity to own a comic from this historic period. I think all well rounded comic collections should own a shining example of a “Canadian White” and this comic would most certainly suffice.

Canadian Whites are not listed in the Overstreet Price Guide but graded copies do trade online and some of the later Anglo Americans while rare do come up for sale often enough.