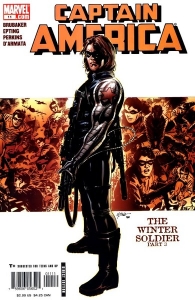 Time for another great Guest Spotlight from the indomitable lion that is Mike Huddleston. Mike’s on his way out to the east coast of Canada for some fishing; my bet is he’s got a secret stash of comics coming with him for when the fish just aren’t biting. They’ll be in that false drawer in his tackle box where he keeps the cat nip; it gets cold out on the lake early in the morning. Mike’s picks are always top notch and this contribution is no exception.

**SPOILER ALERT** There are some details of the Captain America Civil War movie in this post.

This issue details the origin of the Winter Soldier, and what actually had happened to Bucky Barnes instead of his apparent death back in World War II. Captain America obtains a file on the Winter Soldier and reads it. It is presented dossier style to us throughout the book, as Captain America discovers to his horror, how his friend survived and suffered unending torture and brainwashing at the hands of his captures, and how they turned him in to a lethal assassin. It is a pivotal point in the Winter Soldier story. The story was not told in the second Captain America movie. It is told in Cap’s third and current movie – Captain America Civil War, and it is almost a direct lift from this comic to the screen. A credit to the strong writing by Ed Brubaker. This book also plays an equally pivotal role in the movie.

So here we have an all-around excellent comic book with great art and story featuring the well-respected creative team of Ed Brubaker and Steve Epting. The whole Winter Soldier story has been used in two wildly successful movies in the past five years. Back issue demand for these comics should be high. Comics in the bins or on the walls at higher prices.

That is correct. Actually this is the Overstreet value for all of the books in the Winter Soldier arc (Issues #8, 9, 11, 12, 13, 14). You can pretty well buy any of them for the same price as the day they hit the comic store over 10 years ago, or less if you can find them in the bargain bin.

The lack of back issue demand is not a new story, but it is a cautionary one. Back issues have not been adding value to themselves for some time now. Why?

You can see creators are concerned about the comic as a collectible in the future as well. Ed Brubaker for one adds content to his comics that “is exclusive to the comic” not to be part of a trade paperback and it is usually quite personal in nature.

I am going to make the bet that someday collecting and owning high quality comics and story arcs like those contained in Captain America’s the Winter Soldier will win out. There is only a very small downside to tracking down and collecting these books, and I think you will find they are some of the best comic books you have ever purchased.

Reasons for buying this/these books as an investment: