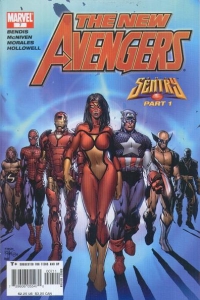 A few months back, right before the new Captain America movie hit, I considered Civil War #1 (July 2006) as an Undervalued Spotlight candidate but for some unknown reason I decided against it.

Another Marvel book from that era jumped on to my radar this past week when I read something about the Planet Hulk storyline, something about the event maybe being tied to an upcoming Marvel movie. That would be beyond cool, I thought maybe I should consider Hulk #92 (April 2006) for an Undervalued Spotlight seeing as it’s the first issue.

When I started researching the Hulk issue I kept coming across the same book I came across a few months ago when I looked into Civil War #1.

The common thread between the two mega-events of 2006 is this week’s Undervalued Spotlight, New Avengers #7.

New Avengers #7 introduces us to the Illuminati, a super-group of Marvel heroes who secretly meet and make decisions that affect the whole Marvel U. In a later special issue, using a story retcon, we’re told that the group was actually formed just after the Kree-Skrull War as fought ought in Avengers #89-97 (1971/72).

The Illuminati were made up of Iron Man, Namor, Mr. Fantastic, Professor X, Black Bolt and Doctor Strange.

The reason the Illuminati kept showing up in my research is that they are directly responsible for these two mega Marvel events.

The Director of S.H.I.E.L.D. came to Iron Man to discuss the concerns over the Hulk, who had just trashed Las Vegas. Iron Man proposed to the Illuminati that Hulk should be put on an uninhabited planet, out of the way so he could not wreak more havoc on earth. Namor was the only one against (Prof. X being absent). Sending Hulk into exile led to the whole Planet Hulk and it also eliminated the Hulk from another Marvel event that soon followed, Civil War.

Civil War came about after Iron Man recommended the Illuminati support the Superhuman Registration Act. Of the group only Mr. Fantastic agreed, the split  led to the mega Civil War event.

I see the Illuminati as a very important player in the Marvel U. yet the book sits at $3 in the Guide and even on the markets the last CGC 9.8 sold for $27 (Dec/15).

Load up on as many New Avengers #7’s as you can.

The 45th edition of the Overstreet Comic Book Price Guide shows $3 as the 9.2 price split.