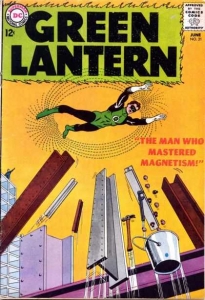 This Week’s Undervalued Spotlight shines on Green Lantern #21, a book that features the 1st appearance of Doctor Polaris, the man who mastered Magnetism.

I’ve speculated on some of Stan Lee’s motivations in the past. I thought for sure he read and liked Dell’s Lobo, perhaps it inspired him to co-create Black Panther seven months later. My natural suspicions are aroused with Green Lantern #21. Did Stan and Jack read DC? Did they like Doctor Polaris? Did they like the concept well enough to borrow against it when creating Magneto in X-Men #1 (September 1963). There are major differences in power and ability between Polaris and Magneto, I’m just pointing at Polaris pointing Lee and Kirby to Magnetism and Magnetic Fields as a concept.

Too much speculation? Too much a stretch? Maybe but I think there is something there and I think that the collecting community should give this another look.

Green Lantern #21 doesn’t even need Magneto! Comic books featuring introductions of villains are always sought after. These issues are what we call Minor Keys and there are more and more of them being separated and highlighted within old established runs.

Green Lantern as a title suffered much after the lukewarm reception the Ryan Reynolds movie got. We can’t lose perspective though, Green Lantern #21 is early Silver Age, it was published before the creation of the X-Men, Daredevil and Doctor Strange. Early days.

Minor keys like this with a neat villain introduction are ripe for future price increases. I’d be looking for a graded 8.0 minimum, preferably a 9.2. If you are buying a raw copy make sure it’s nice and clean, square and tight!