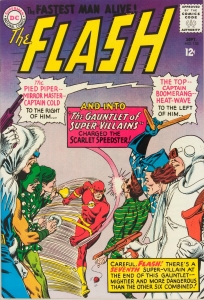 Used to be that if I went AWOL there was no Spotlight. Not any more thanks to what has become a Rogue’s Gallery of Guest Spotlight writers. These guys are good, get them together in a room and there’s no telling the gems they’d dig up. Carey’s contributions are always great, and he’s sent another for us to consider and enjoy. Let’s throw things over to Carey.

I recall a couple of years ago that Spider-man’s Sinister Six was supposedly being targeted for a movie. But with Spider-Man being incorporated in the MCU, it’s probably safe to say that that idea is all but dead. Personally, I’m glad as I have no desire to see Jamie Foxx’s Electro or Paul Giamatti’s Rhino return for another movie. Those were some horrible creative decisions made to some classic villains.

But a team that comes to mind, which coincidentally parallels Marvel’s Sinister Six almost to a tee, is DC’s the Rogues. The Rogues is a team comprised of some of the Flash’s biggest villains much like the Sinister Six was a team of Spider-man’s biggest villains. First appearing in Flash 155, the original team consisted of Captain Cold, Mirror Master, the Top, Heat Wave, Captain Boomerang and the Pied Piper. They were all broken out of jail at the same time by Gorilla Grodd and agree to work together to try and take down the Flash.

Over the years, the Rogues have appeared as a unit numerous times. According to ComicVine, the Rogues have appeared in just over 300 issues. By comparison, the Sinister Six have appeared in just under 250 issues. Comparing Flash 155 with Spider-man Annual 1 in more detail, Flash 155 came out in September 1965 while Spider-man annual 1 came out in October 1964. Neither issue featured the first appearance of any villain but just their first appearance as a team. However, there is one big difference between the two.

You guessed it! This is the undervalued spotlight! The difference is in the value! Spider-Man Annual #1 is listed in the Overstreet at $3,000 in 9.2 while Flash 155 is not even broken out and is listed at $200 in 9.2, or 15 times less! With a Flash movie in the works and the rumor that he will be going up against not one but a team of villains, the Rogues may finally get their time in the limelight.