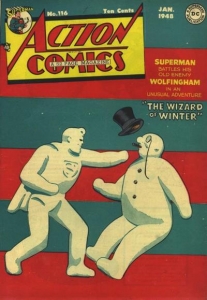 We haven’t visited the early Golden Age in a while and when I came across this beauty I knew what I had to do.

Perhaps I should say, a soon to be prominent cover. Just look at it!

I’m positive this cover will differentiate itself as a cover to have in the not to distant future. It’s simplicity is refreshing, it’s surreal and it is totally unique in the Action run.

The cover is a lead in the the 12 page Superman story “the Wizard of Winter” written by Don Cameron and penciled by Ira Yarbrough, very befitting the December issue.

graded as of this post but I’m sure this is more due to the fact not many collectors are sending this issue down, Action #101 has 48 graded by comparison. You will find this book though, raw on eBay or in bins of some of the older dealers at the Cons.

The Guide doesn’t think much of Action Comics #116, grouping it in with a group from #103 to #120, excluding #108 which gets noted for its strong molten metal cover.