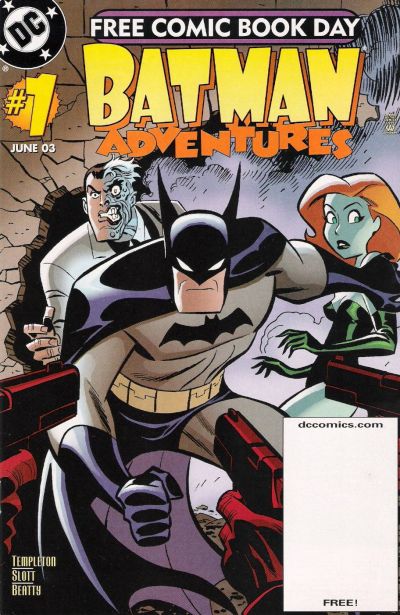 Only a few more sleeps until Free Comic Book Day. Your local comic shop is the place to be this Saturday May 6th, they will be giving away a lot of free comic books. My shop ordered a whack of comics for the event, it’s our biggest order ever for Free Comic Book Day, the event seems to grow a bit every year.

Recently, as we prepped for the big day we chit chatted and reminisced about the early days of Free Comic Book Day remembering cool events like Hugh Jackman’s PSA. Since that conversation I’ve been trying to hone in on a Free Comic Book Day edition that I can feature on the Undervalued Spotlight.

Free Comic Book Day is a monster calendar event in the industry today. I did some rough math and I think something close to 30 million comics have been given away since the first FCBD back on May 4th 2002. How many back issue comic book collectors were farmed out of this fantastic outreach program? Probably not as many as I want to believe but surely more than a few.

Which book to pick? There were many candidates including the flagship book that started it all, Ultimate Spider-Man 2002 FCBD edition. This Ultimate Spidey reprint was one of 4 comics (all reprints) available on the very 1st FCBD, with 631,990 copies ordered the Spidey easily doubled up its competition but it’s not the one I chose.

I wanted to zero in on original content and keep with the realities of current market sensibilities. To work within these constraints I also decided not to go with a couple of the 1st original content small press titles like 2003’s Alternative Comics FCBD edition.

Here’s the thing. Comics.org has this as a reprint of Batman Adventures #1 that came out the same month. Actual street date for Batman Adventures #1 was Wednesday April 30th 2003 while the FCBD editions were given away 3 days later on May 3rd 2003. Surely this is a variant and not a reprint. These books were printed at the same time.

I couldn’t find numbers for the distribution of this book but I’m going to assume it’s in the multiple hundreds of thousands and like I said before, here’s the thing. Nobody collected these, easily 90% of these were read, rolled, ripped and recycled. Have a look at the CGC census. They show 5 graded copies of the regular #1 but only 2 of the FCBD editions and there were waaaay less regular editions printed.

free Comic Book Day is still relatively new, too new to generate any kind of nostalgia for the early days but that time is not too far off. I think there will be certain early FCBD books that end up being desired collectibles. I put this book at the top of that list.

The 46th Overstreet price break for this book is $4 in the 9.2 grade split.