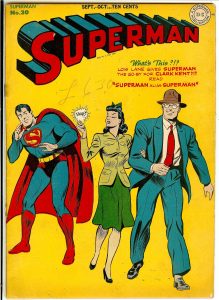 I remember having a solid copy of an old Sup a couple of years ago. I remember picking it up and loving the cover, a great love triangle cover with a sassy Lois snubbing Superman for Clark. As I was pricing it up I realized it was also a key issue! Bonus!

The book I’m referring to is Superman #30 and it’s my Udervalued Spotlight pick this week.

Superman #30 is recognized as the 1st appearance of Mr. Mxyztplk, that pain in the ass from the 5th dimension. The only way Superman could get rid of the mischievous imp was to trick him into saying his name backwards, I can’t even say it forwards. I read on a couple of sites that while Siegel and Shuster wrote Mr. Mxyztplk’s 1st appearance for Superman #30, the character actually first popped up in a newspaper strip because of scheduling issues for the comic. Nonetheless, the market and the industry have accepted Superman #30 as the book that represents his 1st appearance.

Mr. Mxyztplk is one of the classic Superman villains, he’s appeared in every major title run of Superman and he’s one of Sup’s early villains. For me he’s one of those Golden Age villains that has not transferred to the modern age near the potential that exists with the character. I compare him to the Riddler for the Batman villains, much bigger before than he is now.

Still Mr. Mxyztplk is Superman canon and he’s a very big part of it. No collection of Superman villains is complete without this book. The next appearance for Mxyztplk is Action Comics #80 where he gets his 1st cover appearance. I like both books but I’ll give the nod to his 1st appearance issue as the one to have if you can have only one.

1st appearances of major villains of major characters from the Golden Age are prized possessions and Superman #30 qualifies nicely.