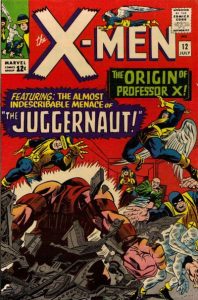 I lucked in and found nice copies of X-Men #1, 3, 4 and 6 recently and I was discussing prices to put on them with my pal Jay who’s really good at that kind of stuff. During our back and forths we ended up discussing the early X-Men run in general and we both agreed that the sleeper in the 1st 20 issues had to be this week’s Undervalued Spotlight pick X-Men #12.

X-Men #12 features Professor X’s origin and it also features the 1st appearance of the Juggernaut.

I’ve always liked origin issues and I like it when they are removed from the 1st appearance issues. I’ve always thought they were the second most important issues for that character beating out say their second appearances in importance. The market doesn’t necessarily agree with me on that point, many origin issues are met with ho hum attitudes from the markets. Professor X is a pretty big character though and his origin issue should matter.

Juggernaut is a fantastic character and a great villain, anytime you can be a top tier villain to both Spidey and the X-Men you’re doing well. Juggernaut is a character that while very realize still has tons of potential, he is mass market gold. Juggernaut is a merchandising force with success in video games, TV and toys. Juggernaut toys traditionally to especially well at comic book shops. The character has a great name has a fantastic costume and aesthetic appearance, he’s equipped for success.

I think more could be done with the character at the cinemas but I’m sure that will come.

X-Men #12 is ready to make a major push forward, it’s the 3rd big key behind #1 and #4. The book boasts a fantastic Jack Kirby cover and the interior has Kirky layouts with the great Alex Toth’s pencils.

The markets are giving the book a bit of a premium over what is a too low Guide price, a recent CGC 9.2 sold for $2199 while a CGC 9.4 got $3585. A CGC 8.0 sold recently for $680. If you can afford it I think the grade to aim for is a 9.2, the grade will put you in the top 6% of all copies and it’s a grade that should appreciate dramatically especially with the X-Men franchise back on the ascension.