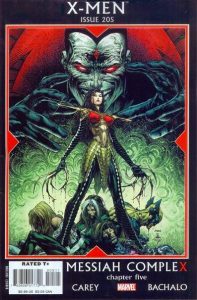 I’ve been talking to some young, in the know fans at the shop and they are telling me that there is some building spec around the X-Men character Hope Summers. These conversations intrigued me – the guys made passionate arguments and asked me to consider what they had to say when I was picking this week’s Spotlight. Well this week I’m choosing X-Men Vol. 2 #205 as my Undervalued Spotlight.

X-Men Vol. 2 #205 features the 1st appearance of Hope Summers. Hope Summers was the 1st Mutant born after the Decimation Event, she’s a massively powerful character who possesses the Phoenix Force. Hope’s powers have not fully been flushed out but all indications are that she is a major force, there’s a quote somewhere online that calls her the Mutant Messiah and some say even the harbinger of death for mankind.

The spec seems to revolve around the delayed X-Men: Dark Phoenix movie due next year and the subsequent moving of all the X-Men characters over to the Marvel/Disney movie machine. There was even spec about a young Hope Summers appearing in Deadpool 2.

All this speculation is great, it creates buzz and interest in the character.

Personally I think Hope Summers has unlimited potential, Marvel has set her up to become a major character. Movie hype aside Hope Summers is a good bet. I stole the following from the Marvel website;

“I’m assuming you saw what she did? How her powers work? Anything we can do – anything any of us can do – she’s already there. It’s like – someone made a voodoo dool for the whole mutant race. That’s what Hope is. She’s all of us.” – Prodigy

X-Men #205’s value has been climbing on eBay, raw copies were getting less than $10 a few months ago but are now sometimes over $20. I’m pretty sure this book can still be found in bargain bins at local comic book shops and at cons – I think I sold one for $2.00 as part of a Messiah Complex Value Pack a week or two ago.

I don’t think it would hurt anyone to hunt down a bunch of these and put them in their stash.

The 47th Overstreet price break for this book is $3 in the 9.2 grade split.