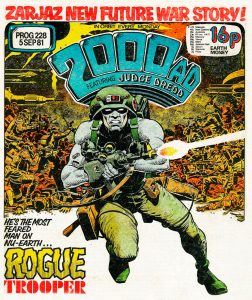 This week Spotlight fan Simon from lovely St. Albans, UK (just north of London) has submitted a gem of a Guest Undervalued Spotlight. I think his argument is sound and he presents it with authority. Let’s turn things over to Simon –

2000AD became popular in the UK in the late seventies and early eighties for its gritty science fiction stories and dark humour, encapsulated in stories like Judge Dredd and Nemesis the Warlock. Dredd made the crossover into the movies, and while no-one has made the definitive Dredd movie yet, his appeal remains strong and the character is well-known in North America and Europe.

Until now, collectors have sought out two issues of 2000AD – number (or “Prog”) one, because it was the first, and Prog 2 because it features the first appearance of Judge Dredd.

Other characters, however, have great potential, and one of them is definitely Rogue Trooper, first introduced in Prog 228 in September 1981. Written by Gerry Findlay-Day with art by Dave Gibbons of Watchmen fame, Rogue Trooper tells the story of a future soldier, genetically engineered for war, whose buddies are killed in battle but then downloaded into three ‘biochips’ which Rogue wears on his helmet, rifle, and backpack. As he faces off against the enemy on the poisoned and polluted planet of Nu-Earth the ‘biochips’ help out. It was a clever genetic twist on traditional British war stories, and proved highly appealing, with Rogue remaining a mainstay of 2000AD for many years all the way up to the present. Rogue Trooper went on to foster assorted board games, novels, action figures and computer games over the years, and now Moon and Warcraft director Duncan Jones has announced he will direct a Rogue Trooper movie.

UK comics are beginning to see some action, with characters like Captain Britain and Psylocke having their debuts in British comics leading North American collectors to seek them out. There is growing interest in rare European reprints of American titles and with CGC opening in London in 2018 now seems like a good time to start buying the keys. 2000AD Prog 228 is certainly one, and it has to rank as one of the most talent-filled issues of the long-running series.

Stories include Rogue Trooper with art by Gibbons, Nemesis the Warlock with art by Alan Moore collaborator Kevin O’Neil, Judge Dredd by Brian Bolland in the classic Judge Death Lives storyline, and Strontium Dog by Carlos Ezquerra. Currently, the price to pay for Prog 228 is negligible – $5 would secure a nice copy and they are not terribly difficult to find… but how long will that last? Prog 2, the first Dredd, has gone from $5 to $500 in the past decade. Prog 228 may well do the same.