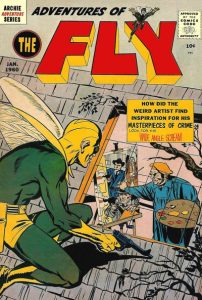 This week I’m turning things over to 1st time guest Spotlight writer Steven. Steven has been supporting the Spotlight for a while now and was kind enough to send me a suggestion that I absolutely loved. Being the lazy type I tricked him into writing it and I’m glad I did, Steven delivers a great pick with compelling insights woven into a tight argument. Let’s turn things over to Steven.

Today’s Undervalued Spotlight focuses on a very well-known and popular artist named Neal Adams and his unheralded and inadvertent break into comics. A very popular artist with a simple, almost accidental start is a story worth hearing. I am of course referring to Adams’ single panel contribution to the grossly anonymous Adventures of the Fly #4.

Neal Adams doesn’t need much introduction. Whether you are a DC fan or Marvel loyalist, you probably have a favourite Neal Adams cover. I personally have roughly 90% Marvel books in my collection but somehow always find myself displaying my Strange Adventures #207 more often than any Spider-Man book. Neal Adams was an unapologetic “bipartisan” artist, freelancing for both big name publishers during the late 1960’s and early 1970’s. So, if you appreciate him for pulling the X-Men title out of the gutter or are forever grateful for converting Batman from a Saturday morning cartoon into a darker knight, you know (and probably love) Neal Adams.

When you think of Adams’ work on characters you probably think Deadman, Batman or Green Lantern. You almost certainly don’t think of the Fly. In the mid-sixties, Archie Comics was attempting to jump on the superhero train and launched “Mighty Comics Group.” Out of that label came a couple of mildly successful but pedestrian characters: The Jaguar and The Fly. The first issue of the Adventures of the Fly was published in August 1959 and was created by industry heavyweights Joe Simon and Jack Kirby. Simon, Kirby and Adams? Please, go on…

As the story goes Adams had attempted and was rejected several times trying to freelance for DC. His passion was the superhero and saw great potential in the DC stable of characters suffering from the new Comics Code suppression. Having been snubbed, Adams turned to Archie Comics and their new superhero line. Edited at the time by Joe Simon, Adams submitted several samples over his first few months but received little encouragement from Simon himself. Nonetheless, sympathetic staffers continued to press Adams to create samples for many of the Archie characters including the Archie Adventure and teen-humour lines.

In a 2000 interview, Adams explains in detail a story of rejection, sympathy for a young artist and ultimately plain old luck.

“I went to Archie to work for Simon. I was told by the people at Archie that Mr. Joe Simon would be interested in samples of the Fly. I did three or four pages on the Fly. I brought them in and left them there for Mr. Simon and was told he wasn’t in. I came back the following Wednesday and Joe Simon wasn’t there again. I’m this 17-year-old kid who has done four pages of samples for Mr. Simon and he hasn’t even come in. They felt sorry for me, so they got him on the phone and he said, ‘Ah, young man, I looked at your samples. They are very nice, but I have decided to do you a big favour… You know how to draw. There are other things you should be doing with your life, not comic books. It’s a waste of your time. So I am advising you to do something else and I am turning you down.’

“The guys at Archie felt sorry for me and they said, ‘Maybe you want to do some samples for Archie?’ I thought, ‘Any port in a storm,’ so I started to do samples for Archie and I left my Fly samples there. A couple weeks later when I came in to show my Archie samples, I noticed that the pages were still there, but the bottom panel was cut off of one of my pages. I said, ‘What happened?’ They said, ‘One of the artists did this transition where Tommy Troy turns into the Fly and it’s not very good. You did this real nice piece so we’ll use that, if it’s ok.’”

There you have it, Adams’ unsung break into the world of superheroes. I have tried for a couple of years now to find this book in person, scouring through half-price bins at comic cons where The Adventures of the Fly is often found. But there is never a #4. When I ask the proprietor if he ever sees one I am almost always met with a look of either confusion or indifference. “Check the dollar bin,” or “what’s special about it?” is the typical reply. I decided once to bring up Neal Adams first published work just to be scorned and told I was wrong. “Some Jerry Lewis or Bob Hope comic is his first published work.” The Adventures Jerry Lewis #101 did contain Adams’ first full-length story and cover but it was published in 1967; eight years after the Fly #4. But I decided to let it go and continue a search that lasts until this day.

eBay has only one listed currently and the seller knows its value. In fact, it is the only Fly #4 that’s been listed on eBay in six months. That’s pretty remarkable when you see seven copies of All-Star Comics #8 currently listed. It’s not that the book is particularly rare, people just don’t know what it is. I feel that could change very quickly if the word about Adams’ first professional work got out a little more.

The 48th Overstreet Guide does acknowledge Neal Adams art on one panel but doesn’t give it any bump over the surrounding issues. It is even Simon and Kirby’s last issue on the title as cover artists. This book has plenty of room for growth.