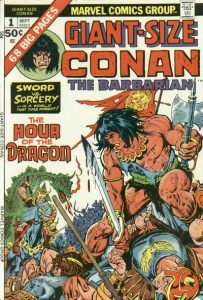 Giant Size Conan #1 features the 1st comic book appearance of Belit, the Shemite pirate known as the Queen of the Black Coast. Belit’s literary debut was in Weird Tales from May 1934, the pulp featured one of my favorite Conan stories The Queen of the Black Coast. She’s a stand out character, Conan #58 and #59 with the great Buscema art and containing Belit’s origin story are also worth owning.

I’m a life long Conan fan, I’ve read all the original Robert E. Howard stories and even liked the L. Sprague de Camp stuff. Of all the Conan movies the 1st half of the 1st Conan with Arnold was the best, it was hard core, unfortunately the second half turned into a buddy comedy and things just got worse from there on movie wise. The Conan TV show in the late 90s was meh but I do hear that Amazon streaming are making a new series?

Jason Mamoa’s stint as the Cimmerian missed the mark but I wonder now that he is a superstar thanks to Aquaman whether they will try again? Or does Disney make a new movie with a new actor?

The latest Conan news that’s got me excited is that Marvel is taking back the Conan rights, I think this is a great opportunity to 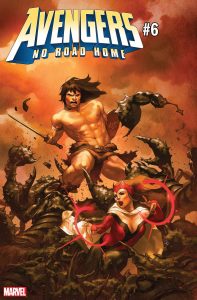 bring one of my favorite characters back into the fore. Even more exciting is Marvel’s audacity with their Avengers: No Road Home event this spring, the story brings Conan into the Marvel U continuity. Check out a cover to #6, Conan and Scarlet Witch!

Getting back to Belit, she is one of the main characters in the whole Conan saga, right up there with Red Sonja. Any success with Marvel shoehorning Conan into their continuity will surely mean good things for Belit, she’s too strong a character to leave behind.

My preference would be a 9.8 but a tight, crisp 9.4 that’s on register and square is a safe and strong play.

Walter Durajlija is an Overstreet Advisor and Shuster Award winner. He owns Big B Comics in Hamilton Ontario.
Articles: 1578

Under the Weather Spotlight