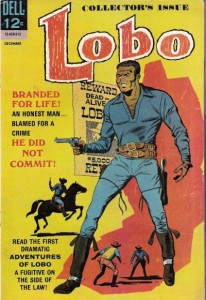 Lobo (unnamed in the book but dubbed Lobo by his adversaries) is a black Union soldier who goes west after the Civil War ends. He is hired as a ranch hand who gets wrongly blamed for killing the boss. He sets out to clear his name by fighting injustice.

The Lobo character was created by writer D. J. Arneson and artist Tony Tallarico (who’s “Where are They?” series of children’s books sold over 11 million copies worldwide). Though the series only lasted 2 issues it was truly groundbreaking for the period and has left a lasting legacy.

America in the 1960’s was a powder keg. Unprecedented changes were taking place in American society and as of 1965 things were pretty much still up in the air as to how it would all turn out. The Equal Rights movement, the Civil Rights Movement and the Anti Vietnam War movement were all under way and were quickly pushing the country towards dangerous civil unrest. Dell Comics was a major comic book publisher in 1965 and it took a very positive and proactive position with its publication of the Lobo title.

But you don’t just have a revolutionary idea in 1965 America and then casually march on to success. Artist Tony Tallarico in a Collectors Times (August, 2006) interview said that he and Dell writer D.J. Arneson came up with the premise and brought it to Dell editor Helen Meyer.

“She loved it. She really wanted to do it. Great, so we did it. We did the first issue. And in comics, you start the second issue as they’re printing the first one, due to time limitations. … All of the sudden, they stopped the wagon. They stopped production on the issue. They discovered that as they were sending out bundles of comics out to the distributors [that] they were being returned unopened. And I couldn’t figure out why. So they sniffed around, scouted around and discovered [that many sellers] were opposed to Lobo, who was the first black Western hero. That was the end of the book. It sold nothing. They printed 200,000; that was the going print-rate. They sold, oh, 10-15 thousand.”

Writer D.J. Arneson did not mention color in the Lobo story and in the story people do not react to the fact that Lobo is black. This fact alone in hind sight seems light years ahead of it’s time.