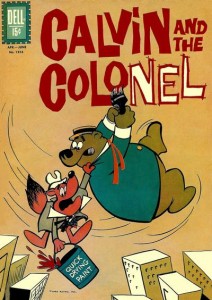 Four Color Comics was a Dell Comic anthology series that ran from 1939 to 1962. Often Dell introduced characters (original and licensed) in the Four Color run. If the character sold well Dell would launch a separate series devoted to the character. When we look at titles like Turok (original) and Bugs Bunny (licensed) we see that Dell published several issues within the Four Color run (actually more than several for Bugs Bunny) before launching the character’s own titles. Often the title would count the initial Four Color appearances thus Turok the title would start at #3 (where FC #596 & #656 were counted as #1 and #2).

Though the Overstreet Price Guide shows the title ending at issue #1354 it is important to note that there were many missed numbers in the run. A quick glance will show that issues 1314 – 1327 are missing as are issues 1351 – 1353. Unofficially there are 31 missing issue numbers. At any rate well over 1300 comics were issued which is the high bar for an American comic book title or series. I can put that into perspective by noting that Action Comics and Detective Comics are still going at 800 issues strong. If Detective and Action remain monthly titles they will need another 45 years or so to reach into the 1300s.

A very large part of comic collecting focuses on unique books, important books, landmark books, historically significant books etc. Four Color #1354 represents the farthest a comic title has ever come. Think of Four Color #1354 as the last piece of a very large puzzle. Puzzle fans covet the hard to put together many piece puzzles for the challenge and comic book collectors all hold a deep respect towards the daunting task that putting together the Four Color run represents.

A popular comic book collecting strain revolves around collecting last issues of runs. Four Color #1354 is the mother of all last issues and it’s a comic you should have in your collection.

– Represents the farthest an American comic book title has ever reached

– The Four Color run itself is extremely collectible

– Low guide value for such a landmark issue