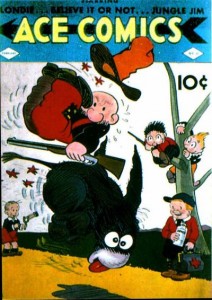 The Phantom was the brainchild of Mandrake the Magician creator Lee Falk. Mr. Falk’s brilliant twist to the character came when he made his Phantom the 21st in a line stretching back over 400 years. The Phantom always fought evil wearing the same costume, part of a ruse to get the bad guys to believe that the character was immortal.

Lee’s character made his comic strip debut in February of 1936 and his Sunday Strip debut came in May 1939. Both strips are still going as of this post. The strip has been translated into 25 languages and is ready in over 40 countries.

The Phantom made his comic book debut in Ace Comics #11. Published in February 1938 the Phantom in comic books predates Superman by 4 months and Batman by over a year.

The Phantom’s success surely influences later masked heroes such as the Batman, the Shadow and the Green Hornet. The concept of the costume being handed down through the ages has been widely used in comic books since.

– Pre-dates masked avengers such as the Batman, the Shadow and the Green Hornet even pre-dates Superman as a costumed hero