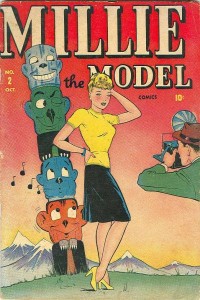 The Blonde Phantom character went on to become very popular and appeared in a total of eight Golden Age titles as either the star or a backup — All-Select, Blonde Phantom, All-Winners (second series), Marvel Mystery, Sub-Mariner, Sun-Girl, Namora and Blackstone the Magician Detective. I’ll even go as far as saying her success lead to Fox grabbing and publishing Phantom Lady (a dormant Quality Comics character). It was Artist Matt Baker’s take on Phantom Lady that revolutionized and defined the whole Good Girl Art genre.

OK fine, I known that an acrobat dressed up as Captain America does not make him actually Captain America (an acrobat donned the Cap outfit in Strange Tales #114 published in Nov. 1963, a full 4 months before Cap resurfaces in Avengers #4 published in March 1964). So I agree that Millie dressing up as the Blonde Phantom does not make her the real deal but without Millie slipping into something less comfortable we may not have had a Blonde Phantom and without the Blonde Phantom we may not have had a Phantom Lady and without Phantom Lady Car and Driver Magazine may have ended up the only place to see a “headlight cover”

– 1st actual appearance of a character named The Blonde Phantom

– May have inspired a whole genre!