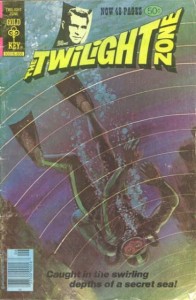 First published works by the likes of Jim Steranko, Jim Lee, Alex Ross, John Romita and etc. are all denoted in the Overstreet Comic Book Price Guide and all trade for a premium compared to the issues around them. Fans and collectors are seeking out these issues.

Not many creators can even hope to approach the importance of Stan Lee or come close to attaining the God-like reverence of the late great Jack Kirby. Not many, but there are a few, and Frank Miller is one of the few. Frank Miller’s first published work in comic books was his artwork in the story “Royal Feast” in Twilight Zone #84, published by Gold Key in June 1978.

Frank Miller waltzed into DC and totally revolutionized their most popular character. To this day all Batman stories are measured against Miller’s groundbreaking work from 80s. At around the same time Miller takes a second rate Marvel character and produces some of the best stories Marvel has ever published (lifting Daredevil into the A list of Marvel characters).

Feeling limited by what he saw as censorship at Marvel and DC Miller took his talents over to Dark Horse Comics. Over the next decade he produced the comic book masterpieces Sin City and 300. Both of these properties went on to become huge feature film successes. Sin City and 300 pushed the boundaries of comic book storytelling and demonstrated the formats potential for successful adaptation into other media.