Bullying is one of the biggest problems facing kids today. Being a nerdy kid, I got picked on a bit but the one thing that was safe was home. The bullies couldn’t get me there. Now with the advent of the internet, cell phones, texting, twitter, etc, etc, there are so many ways to terrorize kids. On October 19th, Heart Transplant comes out from Dark Horse Comics. Written by author Andrew Vachss and illustrated by Frank Caruso with an anchoring essay by Zak Mucha, Heart Transplant tackles the subject of bullying right at it’s center. Not quite a graphic novel, not quite an illustrated book, Heart Transplant is looking to be a perennial book for kids, parents, teachers and librarians. 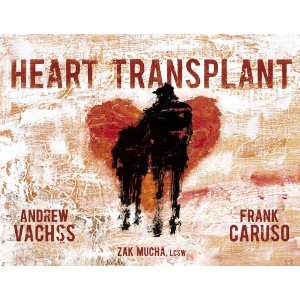 With that in mind, I contacted and got an opportunity to talk to Andrew Vachss over the phone. I’ve been a fan of his writing for years so to say I was a bit nervous would be an understatement. At times I’m sure I came off to Mr. Vachss as a complete idiot but I hope I got by enough to help spread the message of this up coming book. Here’s a bit of our conversation. 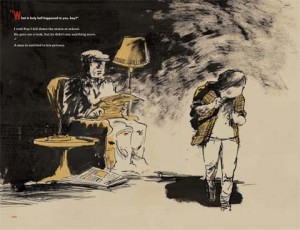 Brent: I just wanted to get into the meat of it, how did this project come about?

Andrew Vachss: It’s more then you’ve got time to listen to. Frank and I developed this concept of a triptych haiku, a long, long time ago because he and I had both been asked to do produce some original work of art for a charity in Sweden that wanted to auction it off. And that’s where it started. It kept picking up steam from there because more and more people were responding to it. I think if you read the flap copy to the book, you’ll understand how I feel about bullies in any shape, form or manner. So Frank and I talked it over and I asked him if he had a few years to invest in a project that would probably never make us a dime. He agreed, we did it. And then to prevent libraries from shutting it out on the grounds that well, it really wasn’t a graphic novel, not with a hard cover and a dust jacket and all of that stuff. And because a lot of people could experience the material but needed a context to put it in, we got Zak to write the afterword. When we had the package together, we spoke to Mike Richardson at Dark Horse and here we are.

On The Unique Format Of Heart Transplant 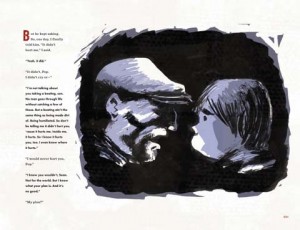 AV: It’s a genre that doesn’t have a name. We realized this was going to give some people fits because they’d get right through it and experience it, which is what we wanted. We didn’t want them to look at the pictures. We didn’t want them to read it, we wanted them to experience it. But sometimes when you’ve had an encounter, whether you were just recently shot at or failed a test or you’re about to get married, whatever, you really want to sit down and process it. And Zak’s piece was intended to do just that.

AV: Dark Horse would always be my choice. I don’t want work with licensed characters like Batman or Superman or whatever the hell, no, I want to do my own work. Mike (Richardson) was kind of a pioneer in this idea “creator owned” material so he was a natural place for me to go when I was first approached I don’t know, twenty years ago maybe, to have the short stories which I already had published, adapted to graphic novel format. Mike was, really he’s a dream to work with. I mean, he keeps his word to start off the shocks. I’ve never actually had any kind of dispute with him about anything. I also knew that the topic was very dear to his heart, he seemed like a natural choice. What really closed the deal for us was, we got offers from art book publishers. But they would have had to sell the book or at least they say they would have sold the book for like eighty five dollars. That’s not why we wrote the damn book. Mike went along with this very strange physical format; it’s longer then it’s high. He’s willing to put expensive hard cover boards on it, wrap it in a beautiful dust jacket, print it on that silk paper Frank wanted, essentially allow Frank to be the art director for the book. We all know, as a result we are cutting into any profit we could expect to make. But he was on board for that, he fine with that and we couldn’t ask for a better deal.

On His New Novel Called The Weight 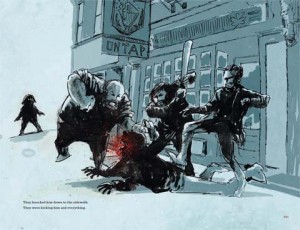 Brent: Can you tell us a little bit about The Weight?

AV: The Weight is a little too complicated to tell you a little bit about it. But if I had to characterize it, it would be kind of a noir romance. I’m sure that enlightened you enormously right? ( both laugh)

Brent: It sort of does. It definitely is you doing the writing, you can tell by the tone but it does seem different then the stuff that has come before.

AV: It’s definitely me doing the writing which is something that the boss at the publishing house, has numerous times complained of when I’ve written stand alone books that “the smart thing to do would be to publish this under another name because you know, there’s a lot of people you haven’t made friends with out there. And it would get all of these wonderful reviews and win all of these prizes and blah blah blah. But your fingerprints are all over this book, anybody could tell you wrote it so there’s no point doing it.”

AV: That is just about a finger snap away from being a done deal. Geof (Darrow)’s my brother, there’s no disagreement between us, 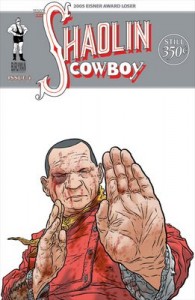 period. We’re just trying to have some decisions made at the artistic end. And that’s where I opt out. Because I write words. Geof is a… genius would be an understatement, with a pencil, but Geof’s the one who’s got to be satisfied, just like Frank was the one who had to be satisfied as to paperstock, quality, look and all that. Geof’s vision for this is that it appear to be like those pulps from the late 20’s early 30’s. That’s what it’s got to look like to please him. So how he wants to achieve this with modern technology, I don’t know, but that’s all that’s really all that’s holding back going ahead with it.

Brent: So the novel?

As you can tell from these brief excerpts (Mr. Vachss was kind enough to put up with me for half an hour), he is a man very passionate about both the subject matter and the book of Heart Transplant. While all involved hope it will do well, the main goal is that the book will be a perennial seller with libraries, schools and parents, thus constantly tackling the problem of bullying year after year and hopefully spreading the message.

As you can tell, there’s a good chunk more to this interview which will hopefully be up on my podcast next week in it’s entirety. We go into more depth about his working with Frank Caruso and what Vachss is currently reading.

Heart Transplant arrives in stores on October 19th. Beyond the standard edition there is a limited signed edition available as well. And if you’ve liked any of the crime novels or comics I’ve mentioned in past columns, I strongly recommend checking out his new novel The Weight which hits bookstores on November 9th. For more info, check out www.vachss.com .

Next week I’ll have my full review of The Outfit.