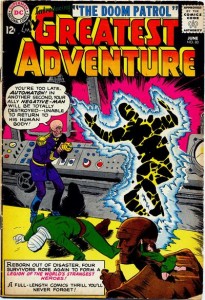 This comic book has the perfect mix of history, controversy, age and quality to make it a must have.

First off there is a bit of a dispute revolving around the creative team. Though writers Arnold Drake, Bob Haney, artist Bruno Premiani and editor Murray Boltinoff get the creator credits writer Drake has stated that co-writer Haney doesn’t deserve the credit. Drake insists Haney was only a hired pen to help reach a deadline, insisting the characters and concept were already created.

Then there is the DC versus Marvel industrial espionage accusations. Arnold Drake (I think this guy had a few chips on his shoulder) had been quoted as saying that Stan Lee swiped the Doom Patrol idea and used it to create the X-Men. X-Men #1 was published in September 1963, 3 months later than My Greatest Adventure #80. Many critics to his claim say that back in the 60s 3 months was not enough of a lead time to have a mimicked product on the newsstands but Drake claimed that many writers were in and out of the Marvel and DC offices, which were close to each other in New York,  and that the concept would have been knowledge to Lee 4 to 6 months before the X-Men went to press. This is pretty intriguing stuff.

I love conspiracy theories and I want to believe Drake’s claim. Remember that the Doom Patrol was led by a super smart guy, the Chief, who was confined to a wheel chair and that the heroes were misfits shunned by society. It all sounds awfully X-Meny to me.

It could be that Drake is half right and that he’s half not telling that maybe his creative team swiped Stan Lee’s and Jack Kirby’s Fantastic Four. Robotman and the Thing both lament their physical form, Elasti-girl and Mr. Fantastic can stretch, Negative Man emits glowing energy and Human Torch can flame on, the Chief though unable to become invisible like Sue Storm did most of his work behind the scenes and out of view.

1963 would have been about the time that the brass at DC noticed Stan Lee’s successful new approach to the super hero. The Fantastic Four, the Hulk, Spider-Man and Thor all had successful launches well before the release of My Greatest Adventure #80 and it’s obvious, to me at least, that DC took note.

I say we call it a wash. Drake and the boys swiped from the Fantastic Four to create the Doom Patrol and in turn Jack and Stan swiped back and morphed the Doom Patrol into the X-Men. And if you want to dig a little deeper you can argue that the Fantastic Four was swiped from DC’s Challengers of the Unknown. Read my Undervalued Spotlight #27 for all the dirty details.

Heck even if all this cool intrigue wasn’t there to make you want this book the line up of villains the team faces would still make this a must have. Any team brave enough to go up against the like of the shape shifting Animal-Vegetable-Mineral Man or Monsieur Mallah the super intelligent gorilla is a team I want to follow.

And there’s more. Drake did something unprecedented when he found out the Doom Patrol was being cancelled, he killed the team off. Doom Patrol #121, published in September 1968 saw the Doom Patrol make the ultimate sacrifice to save a small town. In today’s age of kill ‘em and bring ‘em back this may not sound like a big deal but back in the day this was a very big deal because it simply wasn’t done.