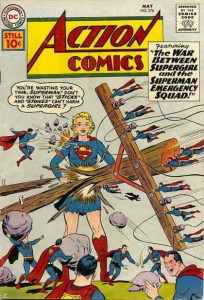 I gotta get a copy of this comic book.

Action #276 features the 6th appearance of the Legion of Superheroes.

Action #276 also features the 1st appearance of Luornu Durgo a.k.a. Triplicate Girl. She, like all people from her planet with 3 suns, could split into three identical bodies. She becomes Duo Damsel after a computer made by Braniac 5 kills one of her bodies.

Action #276 also features the 1st appearance of Bouncing Boy. Bouncing Boy? Yeah, Bouncing Boy! Our B Boy has the power to inflate like a ball and bounce. Pretty cool huh?

Duo Damsel and Bouncing Boy end up getting married over a decade later in Superboy #200 (an interesting wedding night indeed).

The very early 1960s were heady days for DC Comics. We were still waiting for Fantastic Four #1 to come out and change everything. And man did things need changing. The censorship of the Comics Code was resulting in some heavy schlock and DC seemed to have a lock on superhero schlock. DC’s Legion of Superheroes seemed to be a cosmic breeding ground for unbelievably terrible superhero ideas. So terrible that you can’t help but want to collect them.