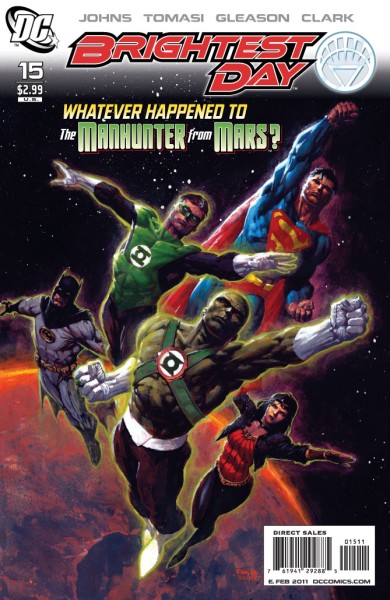 Another issue of Brightest Day came our way this past week. With this 15th installment in their maxi-series, Johns and Tomasi bring us a story focusing on Martian Manhunter. How does the issue shape up?

In the wake of Blackest Night, 12 heroes and villains returned from beyond. Charged with tasks that will take them across the globe and to the depths of their souls, they fight to complete their missions. In doing so, they hope to bring forward the arrival of earth’s next, perhaps greatest champion.

Picking up where we left off with his story, issue 15 returns us to Mars where we find Martian Manhunter’s illusory reality in full bloom. After a psychic 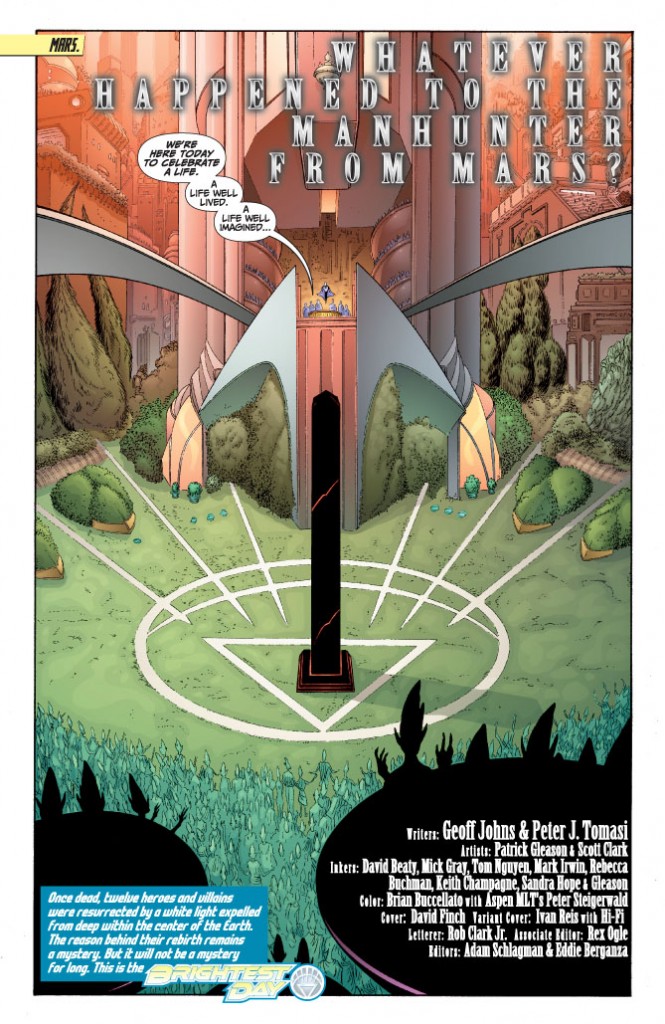 attack from fellow green martian D’Kay, Mars springs to life with a commemorative event honouring J’onn. His Justice League compatriots also are in attendance. The story parades the league members to a podium(?) where they offer their thoughts on their friend and partner. After a very heartfelt, poignant conversation between the League, they apparently depart with J’onn returning to his family’s home to recharge.

Strangely, it’s J’onn’s dog that finds the chink in the illusion’s armor, biting the hand that feeds as it were. J’onn is confronted by his “daughter”, whose mental images of several murders alert J’onn to the untimely demise of his friends. He finds each dead, with the exception of Superman who J’onn resuscitates. These events are followed by a twist shortly thereafter. Interestingly, with each League member killed, J’onn notices the Martian markings for Love and Hate scrawled on the collective canvas his friends’ bodies compose. J’onn’s illusion quickly dissipates as his world melts away. He fights his way “home” and confronts D’Kay, still in the guise of his deceased wife. Grabbing her by the throat, he forces her illusion to fade. She scolds him for not fighting to preserve Mars, but J’onn states clearly he can’t fight for a lie, and he never will.

To conclude the issue, Congorilla and Starman sit in Justice League headquarters playing chess. Everything goes awry as the floor turns to ice and the chess pieces become tar. Firestorm arrives, telling the league members he’s about to destroy the universe. 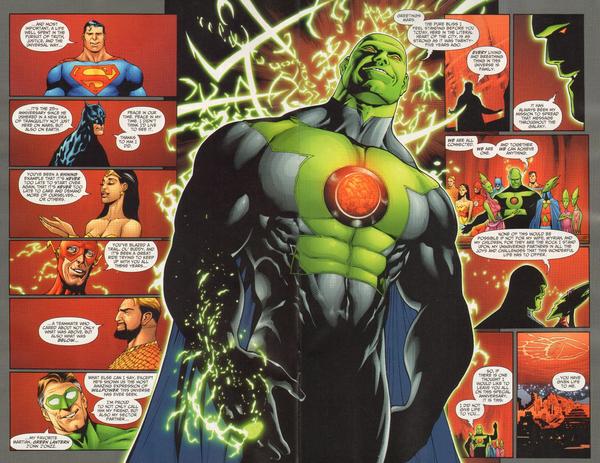 “Pretty” probably isn’t the correct word here. Continuing the theme of the last two issues, this issue brings us a single story. In this case, we return to J’onn’s story. This also obviously means Gleason’s art returns in tow.

There are several pages I thought were quite good, with Gleason showing flashes of brilliance. These flashes kick off the issue with a great piece of art, bringing us to the martian citadel where Martians have gathered to pay homage to J’onn. Gleason creates a fantastic landscape of vibrant greens blended into the world’s natural redness on the first page. Some of the work on the next page is exceptional, with Gleason throwing back to his days on Green Lantern Corps with a great central piece of J’onn as the world’s Green Lantern. There’s also one panel later where J’onn’s dog attacks him, with it becoming quite feral. It’s really drawn quite well in its viciousness. A lot of his better work in the issue is his Green Lantern work.

Other than those great pieces of work, the art is as underwhelming as it’s been the entire series. On the same page where Gleason turns in some great work with J’onn, it’s offset by some indescribably horrid work on the Justice League members. Superman wasn’t bad, nor was Batman, but Wonder Woman, Aquaman, Barry Allen and Hal Jordan all are ridiculously drawn. Allen looks like he should be in a retirement community, with his face aged well beyond current continuity, made even worse in the following page where his mask is withdrawn. Wonder Woman looks like she’s had a botox injection into her lips, and Aquaman has a dark beard for some reason (Did I miss something? Is there a precedent here?). And then there’s Jordan, whose mask makes him look like a hairless Ch’p. One of the worst pages in the book follows two pages later.

The art is at its worst during any scene where Gleason tries to pan back and reveal a larger environment. The page where the League gathers around J’onn in the courtyard is an example. None of the characters look particularly well drawn, even relative to the typical detriment details take when you try to draw such a panel. This is of lower quality than normal. This isn’t even to mention the horribly drawn Wonder Woman just above this panel. I first sampled Gleason’s work on his Green Lantern Corps work, and I didn’t like it then. I can’t understand the praise his pencils get sometimes.

The art is rescued at the end by Scott Clark, bringing us a cool page between Congorilla and Starman. He brings the page to life and transitions to some stranger elemental effects when he dissolves the chess pieces into tar, and the floor turns to ice. The final page featuring Firestorm was pretty swell, to say the least. Once again Clark turned in some great work.

I feel like I’ve been rightly critical of this story, largely because it’s just not very interesting. The Martian Manhunter story to this point has been centred very 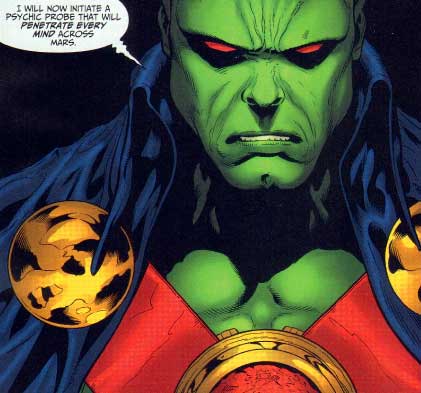 much on J’onn J’onzz’s homeworld and the destruction of a forest we can understand to perhaps be symbolic of his own paradise. If that’s the case, the story device was well thought out. If it’s a literal forest and this issue was not to fulfill his part in bringing forth the next champion, then I’m much less impressed with Johns and Tomasi here.

The story directly follows the last issue to include the Martian Manhunter, now deep within the fantasy world created by D’Kay. The story allows the writer(s) to tell more of a story beyond continuity entirely upon the purpose of placing J’onn at his highest emotional point. The issue places J’onn as a Green Lantern of sector 2814, acting as Hal Jordan’s partner in the Corps. Functioning dually, the story follows J’onn’s psychological struggle between his perpetual paradise and the horrors that symbolize his struggle to fight through D’Kay’s illusion. It’s clear J’onn is subconsciously aware of it and tries to end it. I felt like this story device was well done and was probably the best installment in the Martian Manhunter story to this point. Each member of the league seems to represent himself, with Batman and Superman notably attempting to tell J’onn to wake up in the midst of their deaths, with this iteration of J’onn representing his desire to fight against his better judgment. His anger and sadness before and after he commits the murders come across well. A lot of the early dialogue was well written, and read like a special, momentous gathering between friends. The entire exchange between the members, especially Batman, was enjoyable.

This particular story has suffered as a whole because it’s fairly underwhelming, which combined with the lax art has created an unexciting experience prior to this issue. Despite this issue, I still don’t particularly care for the character regardless of this being the best installment of this arc. As the third issue in a 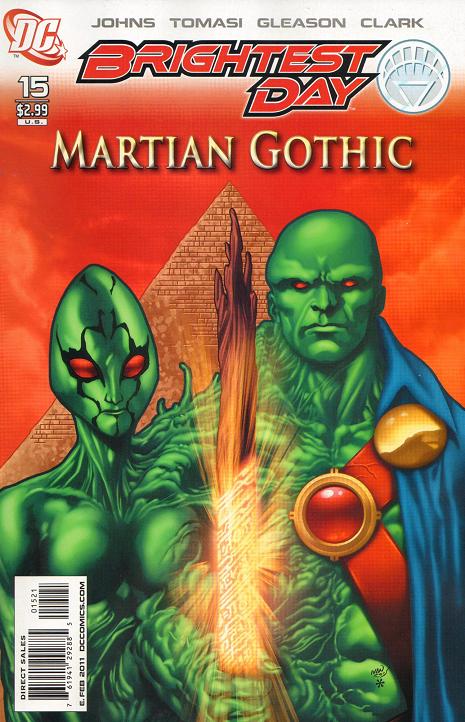 row that’s focused on a single character, the book is starting to branch out and focus on individual arcs, which although is not ideal, is still better than the colossal disorganized mess more than half the series has been so far. Also, as with the last two issues, the final page features a quick two-page teaser to the next issue. This one featured Firestorm, but the text indicates the next issue will focus on the new Aqualad. If that’s the case, we’re in for another shift in the story structure’s presentation.

With the first volume collecting issue zero through seven already released, it’s clear DC is aiming to capitalize on this obvious cash-grab of a series. It’s very obvious Brightest Day is being written as a graphic novel released in installments, which I find hard to argue against after the last three issues. I would strongly not recommend this series at this point. Just save your cash and buy the trades, the serial issues are not worth it and you’re just lining DC’s pockets with cash by allowing them to piggy back off Geoff Johns’ work on Green Lantern and Blackest Night with this series.