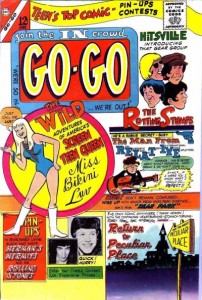 Go-Go was a 1960s Charlton comic book series that lasted 9 issues. The title tried to cash in on the pop culture explosion of the time with each issue featuring pin ups and tidbits on some of the hot musical acts of the day. The Miss Bikini Luv character introduced in this 1st issue was the hip teen that tied everything together.

for Charlton and DC Comics over the next 3 decades.  Titles he worked on included Charlton’s The Phantom as well as DC’s House of Secrets, House of Mystery, Brave and Bold, Phantom Stranger, Detective and Batman. He will probably be most remembered for penciling Starlin’s “A Death in the Family” story arc in Batman #426 to 429.