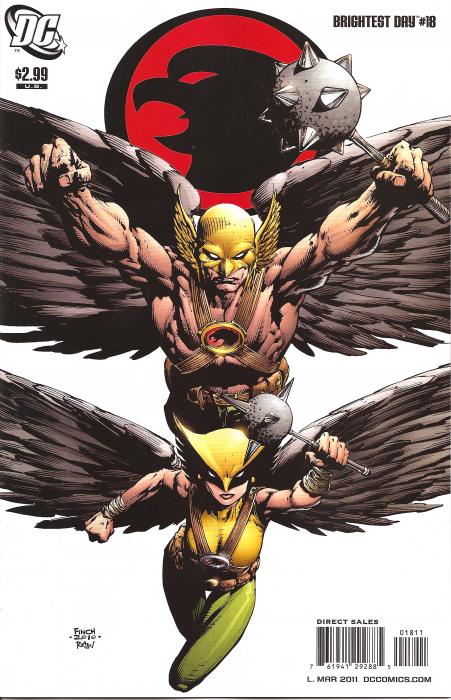 Some of you, including our editor are probably wondering at this point how I can still be reading, much less reviewing this book. For a book that’s had so many more downs than ups, I suppose I choose to look on the bright side of life. Because the night is always darkest before dawn.

Hate mail is welcomed. With that, let’s mosey forward with another review of Brightest Day.

Twelve heroes and villains have returned from the grave, each charged with tasks they must complete if earth’s next champion is to arrive in time to save the universe from the Black Lanterns’ plot. 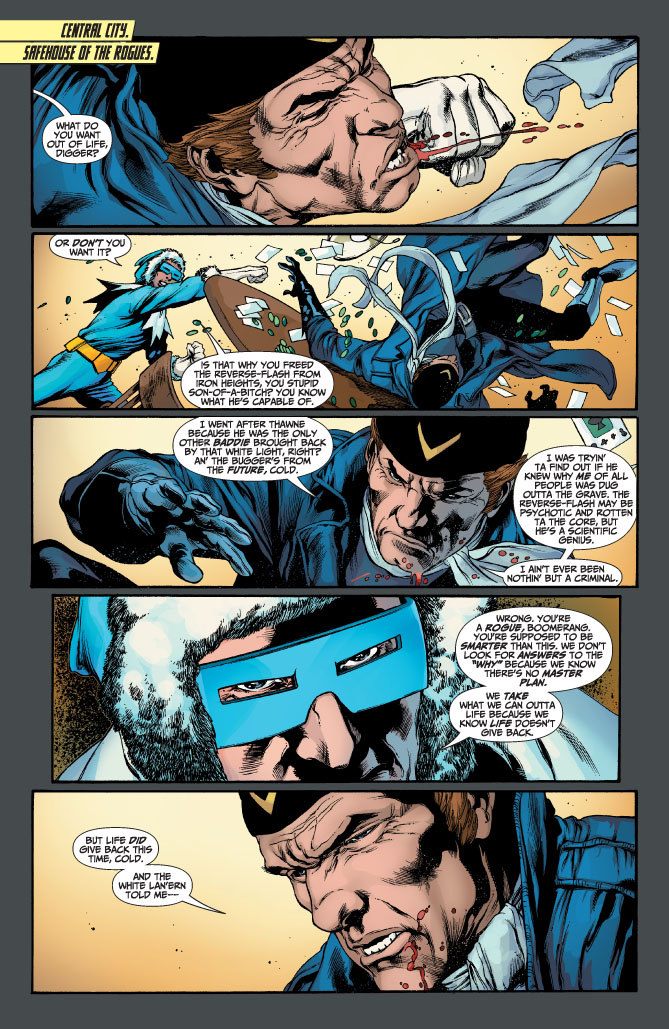 We open the issue to find Captain Cold slugging Captain Boomerang while explaining to him what it means to be a Rogue. Boomerang tells Cold about the white lantern’s message to him, which was to throw one of his boomerangs at Dove. Brand calls Dove while she’s at school and tells her about what happened, while Mera asks Lorena for help. Meanwhile the Black Lanterns tell the “Big Dude” the white lantern is “yours”. The power levels of Brand’s ring reach 33 per cent.

Returning to Zamaron, the Hawks and Carol Ferris attempted to take down Khea and are successful after a lengthy battle. Khea is sucked into the Star Sapphire lantern, but not before she tells them that their curse is broken and this is their last life. Carter and Shiera suddenly revert to white lanterns and are told by the white entity that their mission is accomplished; their lives are returned. Carter, Shiera and Carol discuss true loves, during which Carter brings up the love Carol and Hal Jordan share. Carol transports them to a place of their desires, and we leave her as she solemnly gazes into a pink construct of Hal.

Brand’s power level reaches 100 per cent and he flies away from the scene just as Dove arrives. As this is happening, Carter and Shiera arrive at the Stonechat Museum where they quickly embrace one another and begin to make love. Boston arrives soon after, and aims his ring at the two star-crossed lovers. The white ring  bids them an unfortunate message, and as Carter tries to stop Boston the room fills up with a swirling vortex of white energy; Carter and Shiera are forcefully separated. The final page leaves us with a distraught Brand grasping at the dust left in the place of the Hawks. Have the Hawks met their final end? 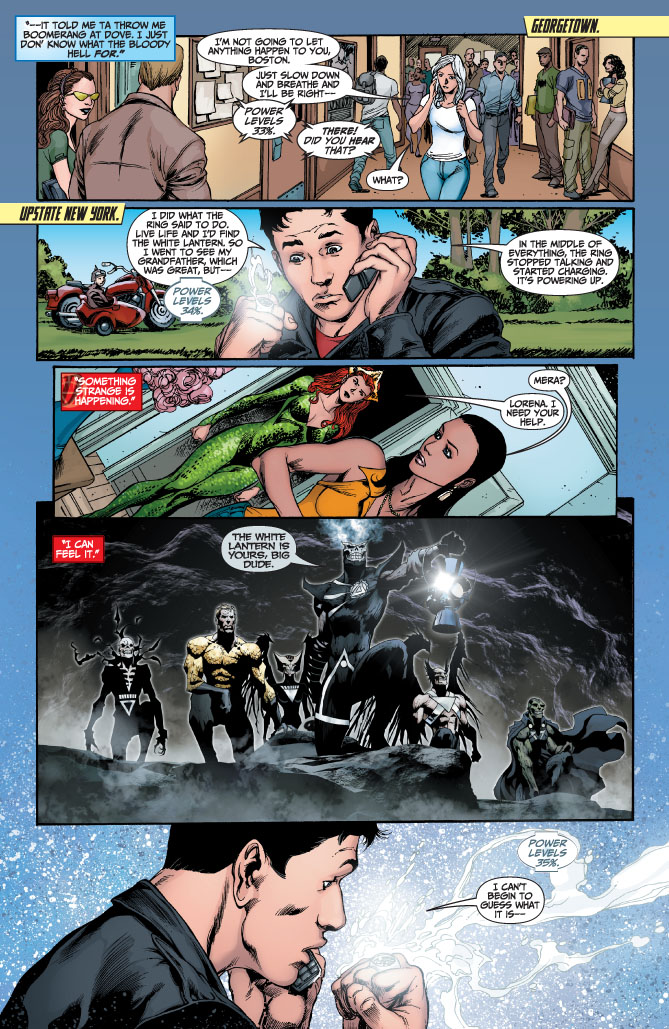 Top to bottom, the art team delivers the goods with this issue. Syaf and Reis, and even Clark’s sole panel at the beginning of the issue offer some solid work. The majority of the work was aesthetically pleasing, using a lot of really cool colouring and elemental and energy effects to bring the art to another level. Even Syaf’s work is free from some of the minor issues that plagued his work in the previous issue. Those minor missteps are all but completely absent in this issue, making for a better visual experience as a whole. The work is at one of its higher points towards the end of Syaf’s section as Carter and Shiera’s former bodies animate and trap Khea with themselves, taking her into the Sapphire power battery. Personally, one of the more heartbreaking panels happens after Carter and Shiera share their optimism with Carol Ferris. As the scene shifts, Syaf draws the panel into a close-up of Carol as she creates a little construct of Hal Jordan with her ring.

The tone shifts a little as Brand flies off as Dove arrives, taking off in a jet stream of white energy. All of Reis’ work with White Lantern Brand and the Hawks is fantastic, right through the heartbreaking, potentially final separation of Carter and Shiera. In complement, the final page leaves us with a saddened and visually dismayed Boston Brand as he grasps at the dust that was formerly the bodies of Carter and Shiera Hall. 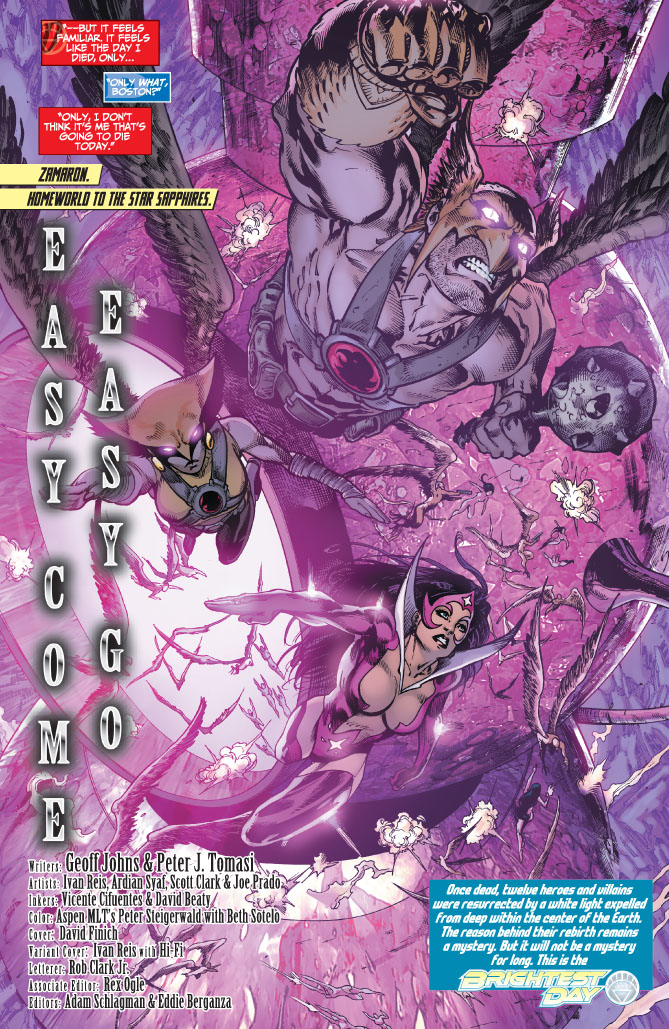 This is two issues in a row where I’ll have something nice to say about this series. Where did this come from? Much of the series has plodded along in its storytelling, scarcely being able to work beyond the jumbled story structure most issues have followed.  I feel like this issue offered the first real surprise of the series. Much of it has been very predictable or altogether boring until now. The choice of the new Aqualad was very predictable, while Martian Manhunter has been boring altogether. This was one of the few issues of this series where the story caught up to the quality of the art.

I was not a fan of Hawkman or Hawkgirl before this series, despite understanding the true tragedy of their story. Now restored, I suppose I presumed the returned characters would stick around a while longer. But if the ending of this issue holds true barring one final rebirth, this could be end of their star-crossed and altogether tragic love. The story as a whole was executed quite well and was paced steadily with hints to the issue’s end sprinkled throughout the book. It really felt like the violence, ultimate love and tragedy between the characters and their story was summed up fantastically over a dozen pages or so. Then in a heartbreaking moment, Brand arrives to put an end to it emphatically. The ending was very poetic, leaving nothing but ash under the white-hot essence of life.

This issue was the second good issue in a row, and with its events I feel like all bets are off for the remaining issues. This was the first major surprise of the series, and it was very welcomed. Yet it’s difficult to say whether that momentum can be continued into the next book since it appears it will be centred around the Atlantean war.

Stay tuned folks, this series may still have some life left in it.