I’ve always felt that one way to judge the popularity that the WECA heroes had during the time that these comics were on the stands (1941-46) would be to look at the number of central cover billings that each one of them got. Today, we are looking back at this era after seven decades and assign special prominence to characters using eyes and attitudes and tastes that have fed on four or five comic era strata and several iterations of moral, cultural, and info-technical “advances.”

For this post let’s stick to the Bell heroes as they appeared on the cover of six of the seven titles; we’ve got to make an exception of The Funny Comics because it featured one central character, Dizzy Don, who got every cover appearance for the 20 issue run with Bell.  Also, the first 13 issues of Commando Comics feature generic soldier covers as one would expect and there are a couple of more generic soldier covers in the runs of the other titles (e.g., Dime 18 and 19, Wow 21). So let’s just look at the covers for the runs of Wow, Triumph, Dime, Active, and Joke Comics and see which characters are most featured on their covers.

When the first and only title was Wow Comics, Edmund Legault simply put Dart Daring on every cover, but when Dime and Active Comics came out in Feb. of 1942 (about the time of Wow Comics No. 5 by my estimation), Edmond Good was Art Director and maybe he chose the central cover figure. But by May, 1942 Adrian Dingle had been hired as Art Director and he brought Triumph Comics along with him from Hillborough Studios. From that point on, Dingle was probably making the cover decisions and, in fact, illustrating the majority of them. Throughout this time it’s not clear if Cy Bell had any input as to which hero would be the central figure on each of the covers.

We also know that by 1945 Cy Bell chose to issue a handful of compendium books that included a collection of the text stories from earlier books called Thrilling Stories for Boys, and five other books that each brought together stories of The Phantom Rider, Tang, Spike and Mike, Speed Savage, and Nelvana.

Each one of the hero ones probably contained at least one new, previously unpublished story. But in our context, the important thing to notice is that around the end of the war these must have been the most popular Bell Features characters.

Looking at the run of covers in the six Bell titles excluding The Funny Comics, we find that Rex Baxter had the most central cover features at 16, all in Dime Comics.

Is this an indication of popularity? Cy Bell was always asking for letters and feedback from readers as to which features and characters they liked the most, so perhaps he or Dingle were guided by this indicators when they chose central figures for the covers.

The glaring omission is Johnny Canuck who, though amongst the highest profile WECA heroes looking back on this period, NEVER received a top cover billing and didn’t merit a compendium in 1945. He did, though, have a couple of 1946 reprints of non-Canadian material named after him and the cover image was a reprint of the Nels Grant cover by Clayton Dexter from Triumph Comics No. 28.

What, then, can we surmise from this Bell Features cover landscape? The war, of course, permeated these comics and this is reflected in the number of covers that had a soldier, airplane, or espionage theme. If we look at all, roughly 190, covers of the seven main titles issued by Bell Features only 44 have a costumed super hero on the cover, meaning that a superhero appeared on the cover of only every fifth issue or so or just over 20% of the time. Yet, it seems to me that, after 70 years, these are the comics that we pay most attention to and that are probably the most collectible.

Super heroes were only the tip of the iceberg of what the WECA Whites were about, yet it seems to be the sharpness of this tip that affects us the most today. Even when the war ended there were still about 18 months of Bell Features comics to come out, but the super heroes didn’t take over and none of the former non-costumed heroes became costumed (Rex Baxter became a counter spy, The Young Commandos were reduced to civilian investigators Ruff and Reddy, and Whiz Wallace became a test pilot, even Nelvana gets an alter ego in the form of Alana North and a job as a secret agent) except for one: Doc Stearne became Mr. Monster in the very last panel of his story in the last issue of Triumph Comics.

One thing I noticed in this investigation was that towards the end of the Bell Features WECA run a couple of covers got a little mixed up and were unrelated to the contents of the books they represented.

For example, the Nels Grant cover drawn by Clayton Dexter on Triumph Comics 28 better belongs on the previous issue, No. 27 but Dingle opted out for his own cover representing the encounter of Alana/Nelvana with the Staticites who appear in the Nelvana story. 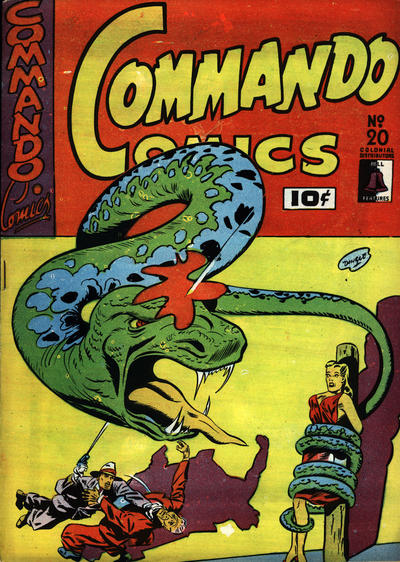 The other misplaced covers are those for Commando Comics 20 and 22. Commando 20 features a cover that has nothing to do with its own content but represents a Grant Randall story that appears in Triumph Comics No. 29. 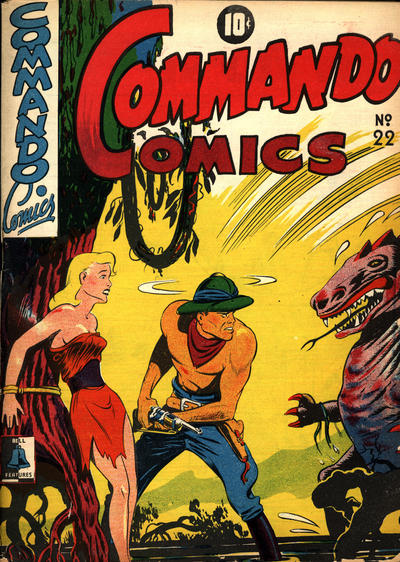 Commando 22 has the same problem with a cover not connected to anything in it but instead represents Fred Kelly’s “Ju-Ju Swamp” story in No. 31. Fred Kelly must have done these covers for Triumph Comics originally but Dingle went with his own covers and perhaps decided instead to use them on the Commando issues. I wonder if we’ll ever find out the reasons behind this juggling?