Edward Albert Bushell was probably born in 1917 and probably in B.C.  We don’t know much about him except for the comic book work he did for Maple Leaf Publications in Vancouver during the Second World War.

His first work for Maple Leaf appears to be the creation of comedic “Kipper Herring” in Better Comics Vol.1 No. 4 which dates from August 1941, about the same time that Adrian Dingle’s Triumph-Adventure Comics No. 1 with the first appearance of Nelvana was hitting the stands across the country. 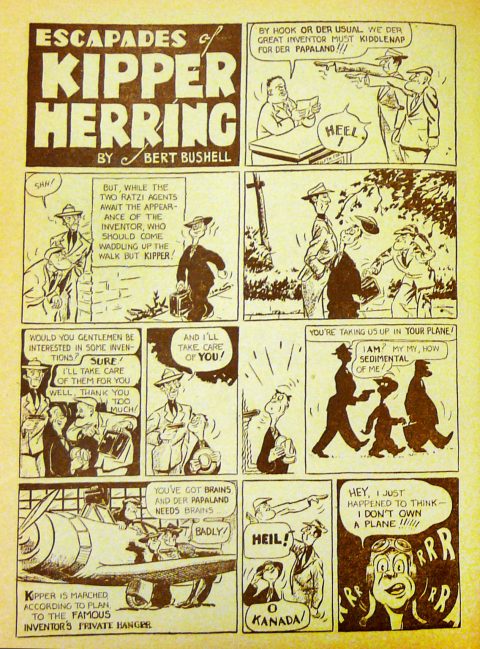 In issue No. 6 of Better Comics, Bushell took over the illustration of Vernon Miller’s cowboy strip “Tiger Tex” whose sidekick was a newly named talking parrot called “Echo.” 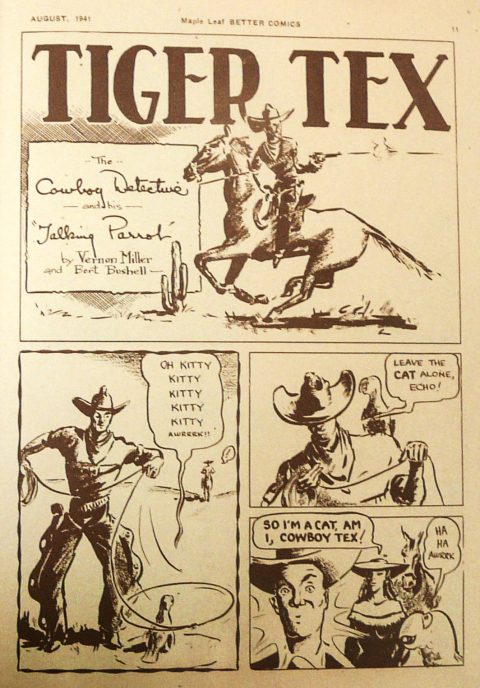 At this same time, Bushell began doing the artwork on a strip in Lucky Comics (Vol. 1 No. 3) called “Ether Escapades” which originally had been created by Herb Frew and drawn by Vernon Miller in the very first issue of the title. It dealt with the exploits of Canadian Air Ace Phil Dauntless who is asked by the Nazis to be a test pilot for their new experimental plane because it was considered too dangerous to risk one of their own pilots. Predictably, Phil takes off with the plane and escapes when he finds out that it is actually an amphibious plane. In the next few stories, this plane is modified and made more streamlined, almost looking like one of the Flash Gordon serial rockets. Phil Dauntless comes to refer to it as his amphibious “Fish Plane.” Bushell soon took over the writing of the strip as well.

In Lucky Comics Vol. 1 No. 10 Bert Bushell transforms Phil Dauntless into the masked hero, “The Black Wing.” This happens because Phil is framed by Axis spies for stealing some important military papers. He’s court-marshalled for this offence and drummed out of the Air Force. Phil chooses to go on fighting fifth columnists by taking on a masked identity and becomes “The Black Wing.” I’m not sure how far the series went but the character seems to have disappeared from Lucky Comics by the end of the second volume perhaps lasting only ten or so issues.

Before we go any further, there are a couple of important Bert Bushell panels to which I want to call attention. The first is from the second-to-last “Ether Escapades” story from Lucky Comics Vol. 1 No. 8, just two issues before Phil Dauntless becomes the Black Wing. Phil and his co-pilot “Happy” found out, in the previous issue, that Phil’s ‘girl-interest’ “Dizzy” had stowed away on their plane. Now, due to mechanical difficulties, they are forced to crash their plane, the “Flying Fish,” into the impenetrable jungles of Malay (I’m not sure where Bushell thought this was, but if it refers to the Malaysian Peninsula and the area just above Singapore, the natives would be more Oriental looking than African as depicted in the story.) The girl, Dizzy, is the first to wake up and heads through the jungle until she comes across a village with a mission. There a suspicious Caucasian monk named “Copra” who insists that she use a special oil on her skin to protect it from the fierce tropical sun. In a few minutes, the oil has an unexpected effect and turns her skin much darker resulting in the sequence on the page below: 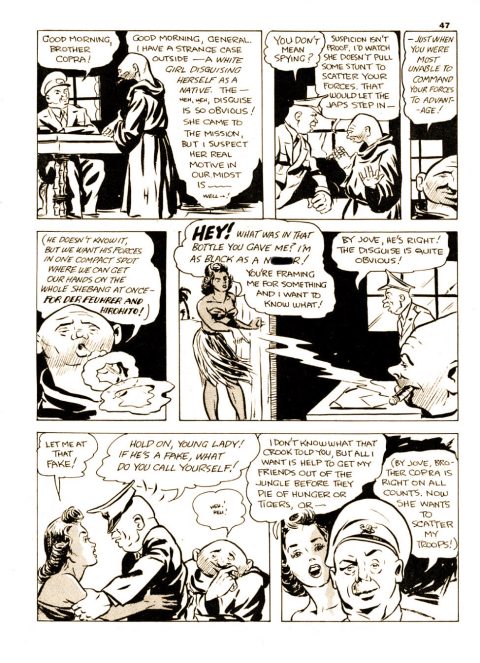 I’ve redacted the “N-word” but Bushell used it without hesitation and there was no reaction from the publisher or editor. We, of course, find that strange today, but those were different times and mores.

The second panel comes just two stories later in the same series and occurs on the splash page for the first “Black Wing” appearance in Lucky Comics Vol. 1 No. 10 and again I’ve redacted the “N-word.” 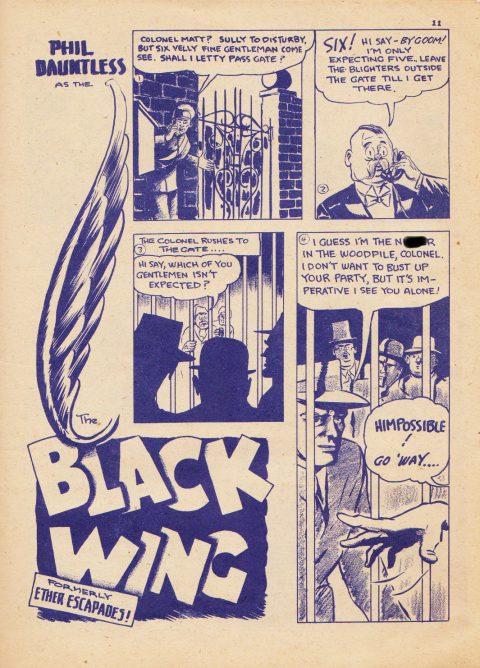 Here the idiom ‘n****r in the woodpile’ (probably far more commonly used then than it is today, though British conservative MP Anne Marie Morris caused quite a reaction when she used it just over a month ago.) refers to the unknown or undisclosed factor which is presenting a problem or may present a problem in the future. It appears to have been derived from the fact that, in the mid-19th century, American slaves would hide themselves in wood piles (among other things) on trains in an effort to escape their oppression. Again, this is used without blinking by Bushell.

This topic screams for a solid paper to be written about the depiction of blacks, Asians (the Japanese arm of the Axis, for example), First Nations peoples, Inuit (Nelvana of the North), and Germans in Canadian wartime comics. Our comics of this period were a strange brew of prejudice and wartime propaganda that tells us quite a bit about the point we were at in our growth to becoming the country we are today. However, I’m not sure how much real progress we’ve made and how “tall” we’ve really become when it comes to these issues. It’s great to see the weave of diversity that exists in our urban areas today, but venture into the rural ‘old stock’ regions of our provinces and territories and you’ll mostly encounter quite a different story. South of the border, these ‘good ol’ boy’ sentiments propelled a cretinous bigot into the highest office in the country.

Back to the comics… At the end of 1941, Maple Leaf Publications came out with two new titles, one called Name-It Comics, which contained a contest for readers to supply it with a name (it became Rocket Comics with the second issue) and Bing Bang Comics whose feature character, Pinky, was created by Bert Bushell.

Pinky was a tough, but clever, pre-teen punk of a kid who was always getting himself into trouble. Imagine a ten-year-old blond Archie Andrews without Betty and Veronica. The strip appeared in the whole 30-issue run of Bing Bang Comics and was featured on its covers more than any other character.

In Name-It/Rocket Comics, Bushell began with a mystery strip called “The Case of the Lost Mind,” but by issue No. 6 of the title (the one with the iconic red Cosmo cover by Bushell) this strip was gone and replaced by a detective strip featuring a rotund, bowler-hatted police sleuth called “Callahan.” For me the “Callahan” strip was where Bushell was his most Eisner-ish in his perspectives and in his story telling. The strip lasted until the end of the Rocket Comics run.

In 1943, Bushell had a short-lived strip full of music references and related “jive talk” called “Juke Box Joe” in Lucky Comics. Joe’s sidekick and main jive talker was none other than the star of Bushell’s first strip, Kipper Herring.

Late in 1944, Bushell came up with a strip called “Senorita Marquita” which first appeared in Better Comics Vol. 3 No. 6. The story was about Mexican layabout Romano and his girlfriend who would like to marry him but can’t because her father won’t give his permission unless Romano has a job. The series switched over to Lucky Comics in 1946.

In 1945, with over a year left to run in Maple Leaf Comics, Bushell illustrated a small paperback volume of poems by Robert E. Swanson called Bunkhouse Ballads (Book 3). 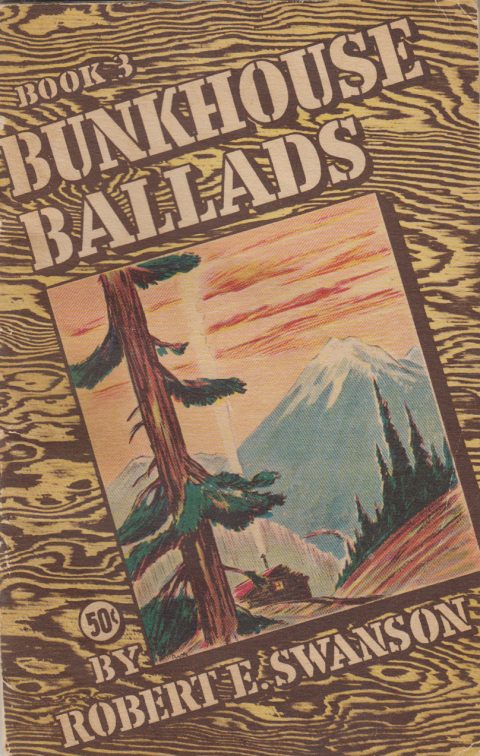 Swanson was also known as the “Bard of the Woods” and he created a series of poems while he travelled around B. C. logging camps as a forestry safety inspector.  Bushell illustrated this slim volume with just over a dozen graphics that supported the poetry. Here are a couple of examples: 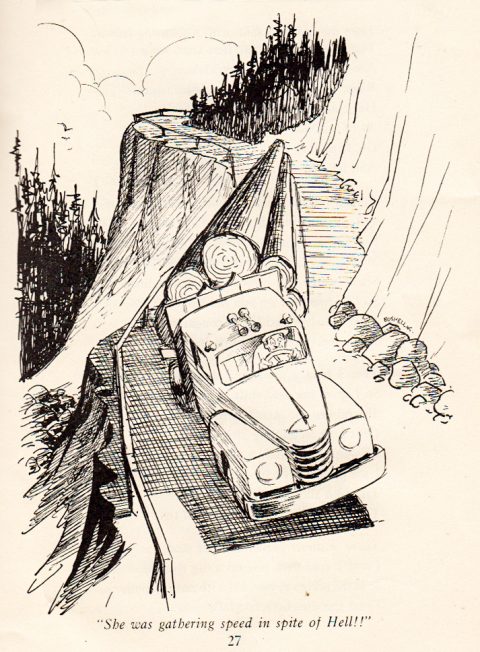 During the last year or so of Maple Leaf comics, Bushell created a new strip named “Adam and Eve.” It was about a young married couple in which the husband always seems to get himself into a jam of some sort. It probably reflected a lot of the radio comedies of the time and foreshadowed numerous TV sitcoms to come.

There is scant information about the World War II comic artists on the west coast even though, like Bert Bushell, they had a prolific output of comic book work. So far only three Maple Leaf artists have been inducted into the Joe Shuster Comic Book Hall of Fame: Jon Stables (2006), Vernon Miller (2013), and Shirley Fortune (2016). Bert Bushell (along with fellow Maple Leaf artists, Ernie Walker and Spike Brown) must stand at the head of the line for imminent recognition from the Joe Shuster Awards for their contribution to the history and development of Canadian comics. 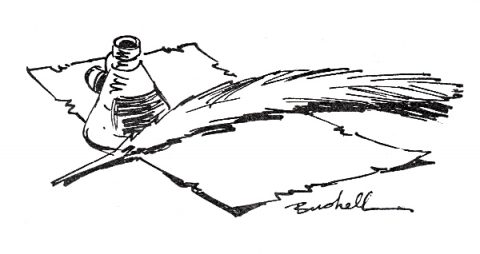 A note to let everybody know that my panel with Gerry Lazare at Fan Expo will be on the Sunday of the Labour Day weekend at 2 pm (no room yet specified). Gerry will follow this up with a signing for about an hour at the Chapterhouse booth right after the panel. Proceeds from the signing will go towards supporting the funding of my book, Heroes of the Homefront which is about the Bell Features artists of the Second World War.