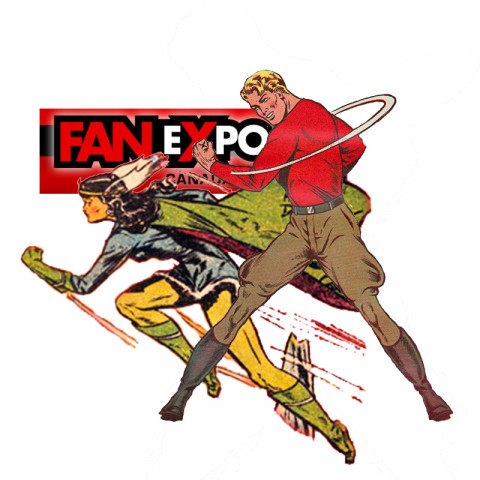 FanExpo opens today and I have the good fortune of hosting a panel on Canadian war-time (WECA) comics. I urge all readers who are attending FanExpo on Sunday to attend this panel if they have the opportunity because we expect to provide some quality information on this cloudy and arcane first age of Canadian comics.

The panel will be offered from 2:15 PM to 3:15 PM and I will be presenting and moderating a discussion between the audience and the following participants (in alphabetical order):

Walter Durajlija – Our own intrepid energy source here on Comic Book Daily with his Undervalued Spotlight column, member of our Canadian Whites Project  team (along with Stephen Lipson, Jim Finlay, and myself) and chief cook and bottle washer of Big B Comics . Walter will bring the dealer’s and collector’s perspective on these great old Canadian books.

Hope Nicholson—Hope is one of those rare female anomalies who are mired in the often chauvinistic world of comic fandom. She is a producer on the upcoming documentary “Lost Heroes” which is in post  production and is set to appear very soon on Canadian Superchannel. She has been researching the Canadian Whites for the documentary and will be able to offer all sorts of interesting information.

Robert Pincombe—Robert is an eloquent and knowledgeable script writer and story board artists for a number of TV animation series. He is involved in a number of blogs including one on Canadian Animation and another on these Canadian Golden Age books. Rob was a good friend of Les Barker who created and drew Johnny Canuck and has published some work on him. Rob is also involved in high resolution imaging of Canadian Whites and has solid historical knowledge and a creative and artistic perspective to offer on these Whites. Rob has to participate in a panel immediately after ours and may need to leave before we have time to wrap up the questions.

Rachel Richey—Rachel has had a chance to spend a solid bit of time at the Canadian Archives in Ottawa and with their collection of Canadian Whites. She is another anomalous female who understands and appreciates what comic fandom is about and is heavily into the comic scene in Toronto. She has a popular blog about Canadian comics called Comic Syrup . Rachel has a breadth of valuable knowledge and insight that she can bring to this discussion.

Again we invite to come and participate in a slice of a valuable part of our Canadian heritage that needs to be recovered and protected.  I hope to meet many of you there.