The big news this week is that the WECA Price Guide is finally finished and available! I have to thank Tony Andrews, Jim Finlay, and Walter Durajlija for being the main forces behind determining the prices listed in the book and Jim, especially, for an initial proofread and contributing to the completeness of the 780 odd books listed. 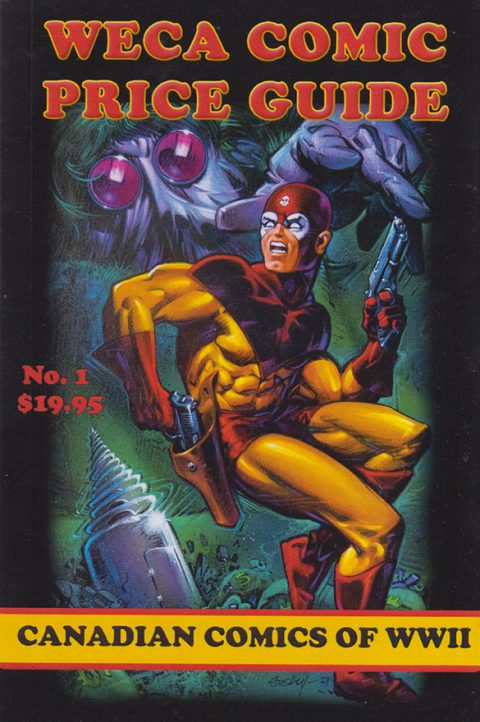 I picked up the 300 copies that were printed by Studiocomix Press in Kitchener a week ago and they were first sold at Niagara Con last Saturday. Studiocomix has a small number available at its Frederick Mall location and Big B Comics in Hamilton has copies as well.

This was self-published and, since there is no other distributor than me, the best way to get a copy is to send an email to me at [email protected] detailing how many copies you would like and your mailing address, so I can figure out your shipping costs. I will reply with the costs involved and payment can be sent to me either through Paypal, money order, or cheque. Of the 300 printed, 160 copies have been sold (including 25 copies to Bud Plant and 50 copies to Big B Comics in Hamilton) and five numbered and signed copies are going to Heritage Auctions for listing in an upcoming auction. This leaves me with 135 copies left for general distribution. Let’s see how things go. Maybe there will be a call for a second edition…?

Of interest is the Library and Archives of Canada “Alter Ego” installation at the TD Gallery at The Toronto Reference Library. I was able to see it on the Sunday of TCAF a couple of weeks ago. It’s on until the end of July and is well worth visiting. This is slightly different from the original “Alter Ego” exhibit at LAC in March, 2016 in the fact that it has a couple of video presentations (e.g., an interview of Chester Brown by Conan Tobias) and a number of original Canadian WECA comics on display, including a copy of Active Comics 1 and an unnumbered Nelvana compendium from 1945. Well worth going to see, if you have a chance.

On the west coast, The Sydney Museum just outside of Victoria, BC, has a comic book exhibit called “Up, Up, and Away (Comic Book Heroes and our Culture)” with contributions from collector Peter Hansen and artist Ken Steacy. It’s on until July 6, so another chance to see some WECA comics and more on display to the public. Here is a picture of Assistant Director Alyssa Gerwing and Comic Book Exhibit Curator Terri O’Keefe standing in front of a display case containing a half-dozen Rocket Comics and more. 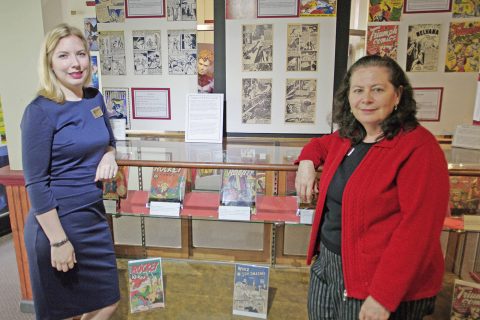 Something I started up last month is a mailing list to discuss Canadian Golden Age comics. This includes the WECA period (1941-46) and the FECA period (1947-1956)—essentially all pre-Silver Age Canadian comics. The focus is on older Canadian comics, but we welcome the occasional foray into the post-Orb, Canuck and Cerebus world. Please join up, if you are interested, and start up a conversation on a topic. You can check it out here.

Last bit of news is that my panel proposal for Montréal Con (July 6-8) on my book, Heroes of the Home Front, has been approved but still waiting for a date, time, and location. It will be great to get out to Montréal and it’s thriving comic community and, especially to have a chance to meet up with Jack Tremblay and Rick Trembles again as well as any other WECA comic lovers and collectors in the area.

With a couple of WECA comic projects under my belt, it’s time to start thinking about the next one. In the forefront is a Gerber-style Photo Journal of all the WECA covers (along with a bunch of the back covers, because many of them are interesting) in a single volume.

Maybe a complete reprint of a title or a collection of a hero’s stories such as the Nelvana, Johnny Canuck, and Brok Windsor collections that have already appeared? Freelance, one of the best written of the WWII characters, comes to mind first, or, maybe Speed Savage. Even reprinting all wonderful “Now You’re Loggin’” stories by Bus Griffiths from Rocket Comics or the adventures of Lucky, the little French WWII refugee, son of a Canadian father and French mother, from Lucky Comics could be collected together into great little graphic novels.

“Lucky” is the story of Roger, an eight-year-old boy growing up on a farm in Normandy in 1939, just as the war in Europe begins. It’s put together by writer Howard Hagar Hall and artist Ernie Walker–the same pair behind that 1942 government of British Colombia one-shot Your New World comic and general contributors throughout the full run of Vancouver’s Maple Leaf Publishing books.

On the splash page from that first story in Lucky Comics Vol. 1 No. 3, bracketed by what could almost be taken as a perforated stamp edge, is the reason for including this story in a comic book: “The purpose of this tale is to show you how much ‘luckier’ you are than the children of Europe… BUY WAR SAVING STAMPS ALL SUMMER!” No costumed heroes, no detectives, no funny animals, just an eight-year-old kid facing a world war and Nazi occupation.

The boy has the nickname “Lucky” throughout the story and it begins with his father, a Captain in the French army and his older brother, Pierre, leaving to fight the Nazis. We slowly learn that Lucky’s father was a Canadian soldier who had fought in WWI and there met Lucky’s mother who had served as a nurse. After that war, Lucky’s father stayed in France and married Lucky’s mother, eventually having Lucky’s older brother, Pierre, and then Lucky, himself. One set of Lucky’s grandparents lived in Canada and Lucky’s parents always promised that one day they would take him to visit them in Manitoba. 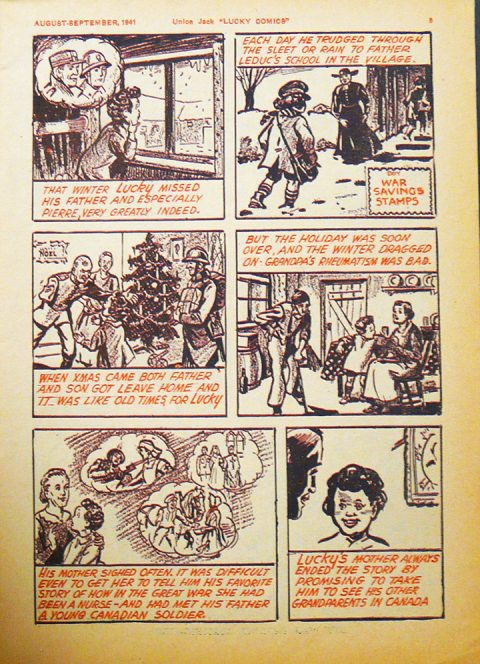 In the spring after the war begins, Lucky’s mother receives a telegram saying that both Pierre and Lucky’s father had been killed. With the Germans closing in on their part of the country and their farm, Lucky’s mother packs what she can in a wagon and she and Lucky start out on the road for the presumed safety of Paris. On the way to the capital, the road is strafed by Nazi planes and Lucky’s mother is killed. In the last few panels of this first story, Lucky is stopped and questioned by Nazi soldiers and his response is the image on the cover of Lucky Comics Vol. 1 No. 3. 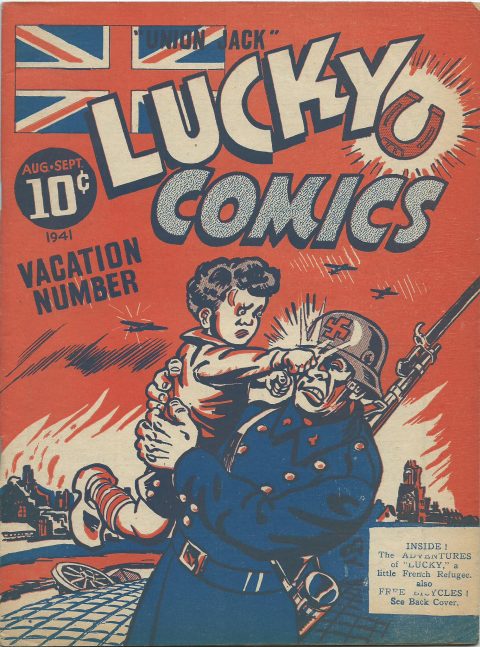 Through the next few issues, Lucky partners up with a dog called “Toto,” and the old lady “Pol” who is known locally as an old witch, and who shelters him. He also finds out that his father hadn’t been killed but is badly wounded. While Pol and Lucky tend to him, he gives Lucky his own cap and a Nazi list of French collaborators which he has appropriated from a Nazi General’s desk. Lucky’s father informs them that the list must get to the underground in Paris and Lucky immediately volunteers to take it.

Reluctantly, the father admits that this might be their only chance. Pol sews the list into the cap and with it firmly on his head, Lucky sets out for Paris, and his uncle’s patisserie, while his father recuperates in Pol’s cabin. Lucky now has his full costume for the series. A French soldier’s cap on his head, shorts, red and white hooped socks, and wooden clogs on his feet. This is his trademark outfit for the rest of the series.

Robert MacMillan pointed out to me that Lucky Comics Vol. 2 No. 2 has some exceptionality because it is one of the few covers that shows Nazi soldiers killing a civilian.

The old woman being shot on the cover is Pol, who had sheltered Lucky (and, we learn, was a former servant in Lucky’s household before he was born). Bob is probably right. I can’t think of another cover that depicts a civilian being killed by an enemy soldier.

After the war, Lucky discovers that his mother and his brother, Pierre, are still alive and the whole family is reunited. We see this in Lucky Comics Vol. 5 No. 10 which is from April/May of 1946. If Lucky started his adventures in September 1939 when he was eight, he must be 13 or even 14 by this time. There are only four more issues of the title and the last issue is Lucky Comics No. 34 dated Oct./Nov. 1946. 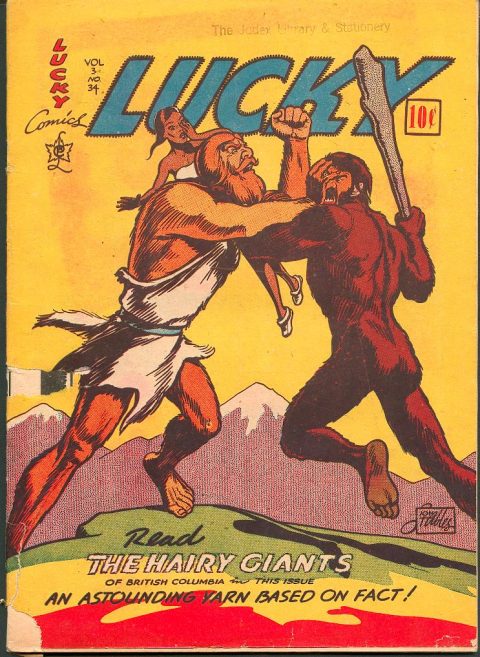 During those four issues artist John MacKillop takes over drawing the stories from Ernie Walker and no writer is credited. The only thing that I can find out about John MacKillop is that his family was featured in the June 1963 issue of Canadian Homes Magazine.

During those last few issues, Lucky makes it to Canada and meets his grandparents in Manitoba, but he does so without his own parents. By the last panel of the last story, Lucky has been mugged in an alley and loses his memory—a perfect setup for a whole new series of adventures in a brand-new country.

That’s all for this post. Get a copy of the WECA Guide if you’re at all interested in these comics. It crunches a whole bunch of info about these comics into a pocket-sized container. You won’t be sorry.