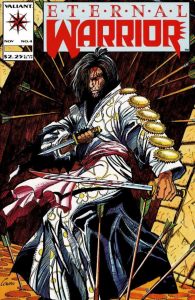 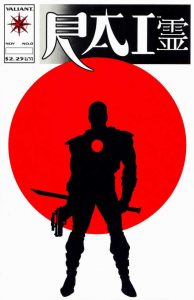 I was at the Niagara Falls Comic Con (Canadian side) this past weekend and had the pleasure of talking comics with some very knowledgeable people. I always try to come out of a con with at least a couple of Undervalued Spotlight candidates, where better to gain some knowledge and get the pulse of the market?!

Saturday after the con a few of us made a little Club Soda run, it was a quick walk from the hotel and we talked comics all the way there. We passed by a mall parking lot where a bunch of young guys gathered around their cars, you know the guys with their cars all shiny, with added spoilers and extra lights everywhere. There were probably doing the same thing we were doing, talking about stuff they loved. I said they reminded me of the Fast and Furious movies and that somehow segued the conversation over to Vin Diesel signing on to play Bloodshot in the upcoming Sony movie.

Bloodshot is the 1st of Sony’s planned multi-movie project involving characters from the Valiant Comics universe.

Someone mentioned that Valiant had actually been fully bought out (after some partial ownership) by the Chinese firm DMG fronted by an American named Dan Mintz. The whole conversation stuck with me and when I got home I did a little digging and speculating. I speculated myself into choosing Eternal Warrior #4 and Rai #0 as this week’s Undervalued Spotlight picks.

Bloodshot is a super soldier along the lines of a RoboCop/Jason Bourne/Total Recall, his bloodstream contains a billion nanocomputers giving him a wide range of cool abilities.

Here’s what I’m excited about, as of right now the superhero cinematic universe is ruled by Disney/Marvel and Warner Brothers/DC. Valiant represents a potential 3rd comic book driven cinematic universe with characters taken from the much acclaimed Valiant project of the 1990s. Valiant boasts a popular stable of characters including Harbinger, Archer and Armstrong and Bloodshot.

Have you noticed how much weight is given to the overseas box office numbers with every superhero movie release these days? Overseas numbers now out box office domestic box office! Like in all international business dealings there are regulations to follow and hoops to jump through for equitable and profitable distribution deals overseas especially in the world’s second-biggest movie market – China.

Part of the excitement of the whole Valiant movie project is that it will not be American driven. This whole enterprise will be Chinese driven with obvious international partners like Sony Pictures.

Whenever lots of new fans are created there is always a percentage that seeks out the source material which in this case happens to be Valiant Comics from the 1990s which would lead to stronger demand and thus stronger market prices.

I know there is a lot of speculation here but then again speculation is a cornerstone of our hobby.

Reasons to buy these comic books as an investment: