First bit of news is that the Heroes of the Home Front Kickstarter went live on Labour Day and will run through to October 4th. Let’s see if we can pull this thing off! Take a look when you have the chance. It would be great to get copies of this book into the hands of those who care about this stuff. Maybe if we can succeed with this, it might give us leverage to approach a publisher to put out a more widely distributed softcover second edition. 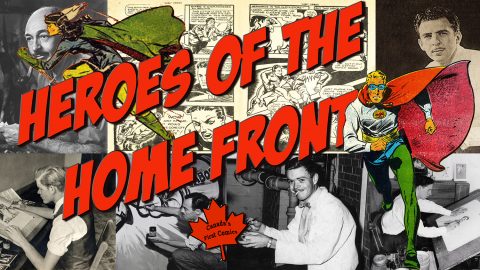 One thing that I’ve noticed is that as soon as you launch a Kickstarter, you start getting ‘bot and phishing emails that say that they’ve looked at your project and love what they see and that they want you to succeed. They offer you ways to enhance the reach of your Kickstarter and just happen to have a number of promotional deals to help you do that. Hmmm….?!!

My Sunday panel with special guest Gerald Lazare went very well, though we got there only by the skin of our teeth. I picked up Gerry and his wife, Setsuko, in north Toronto about 12:30 pm. Gerry thought we should take the Bayview Extension down but I had the hubris of thinking the Don Valley Expressway would get us right down town in the most efficient way—big mistake! It was plugged, and after a good deal of stop-and-go inching along while I bore the anxious weight of thinking about how long a 2 pm audience would put up with a blank stage before they walked out, we managed to reach the Lawrence exit. I wisely seceded to Gerry’s navigation, and we meandered down through Leaside (where Gerry and his parents lived for a while) taking the route that Gerry used to take when he worked as an instructor at OCA.  Once we got down to Front St. and tickled into the urban core of the city, both Gerry and Setsuko remarked on how the new tall buildings loomed and bulged over the corridors. We went right by the St. Lawrence Market and Leo Bachle’s digs as a small boy, The Flatiron Building—both of which really haven’t changed much. We didn’t get down to the Convention Centre underground parking gate until 1:40 pm, barely 20 minutes before our scheduled presentation and were greeted by an small echelon of security who told us that the lot was full. It took us a couple of minutes to convince them that we were giving a presentation inside at 2 pm. After a minute or two they let us in but they weren’t kidding when they said that the lot was full. We had to go up about three ramps before we found a single spot.

Anyway, we made our way to the venue and picked up our passes and managed to get to the presentation room (which had been listed incorrectly in the programme schedule) with a couple of minutes to spare. It took a number of minutes to set up and get the Powerpoint presentation connected up properly but we got going with a crowd of about 35 engaged people. Gerry presented us with recollections of people (Adrian Dingle, Mel Crawford, Ross Mendes, and Fred Kelly) and events from almost 75 years ago. Gerry will be turning 90 in about three weeks but he was clearly the youngest person in the room and probably at the entire convention itself. We got some great questions from the audience and after we got the signal from the ushers that our time was up, a good group of the audience came up to Gerry to shake his hand and ask further questions. West coast artist Ken Steacy was there at the beginning to shake Gerry’s hand and remind him that he was a student of Gerry’s in the early ‘70s at OCA. Regrettably, Ken could only stay for the first half of the presentation because he had to catch a plane back home.

After our presentation, we made our way down to the convention floor and the Chapterhouse booth with a good number of people from the panel and walk-ups as well coming up to meet Gerry and chat and have something signed. We had a poster of the original art for his “Air Woman” splash page from Triumph Comics No. 21 made up and charged $20 for it signed with proceeds going to my Kickstarter. 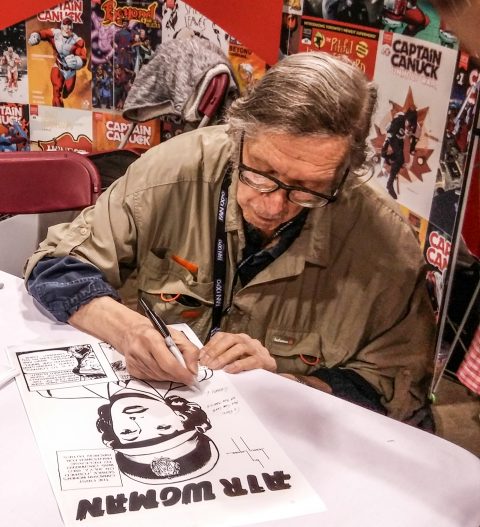 Both Gerry and his wife, Setsuko (who’s been a dancer all her life as well as a painter) rode out the whole hour or so that we were at the table with ease. Setsuko wouldn’t sit down and even offered me the empty chair next to Gerry because I was probably starting to wobble a little bit. I also began to think that it was a shame that so many individuals in that river of people flowing up and down the aisle in front of us didn’t realize whom they were walking past—I hope my book will help to nudge a few of them, and a few of our contemporary Canadian comic collecting company in general, awake to this history we’re in danger of forgetting. 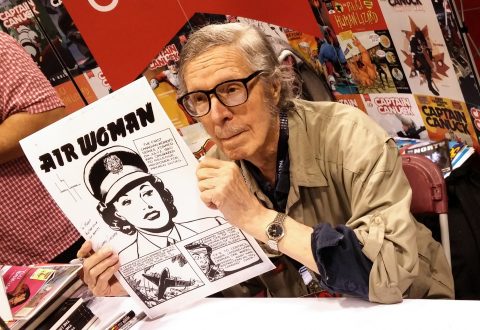 Just after 4 pm, with about an hour left before the con shut down, we packed up and retraced our way past the giant Woodpecker (those of you who have been to the venue will know what I mean) to our parked car. The Don Valley north was mercifully cooperative. Gerry and Setsuko had weathered the experience far better than I, and said that they would be happy to do the same type of thing again to promote my book. I can’t thank them enough for the support they’ve given me and what they’ve shared with me about the experience of being artists.  Gerry took about 20 of the left over “Air Woman” prints and said that he would sign them for me to use at upcoming presentations.

All in all, a good result for a presentation on what’s considered to be a niche subject and that was scheduled (with a room number mistake in the listing) during the Sunday denouement of the convention. Hope we can do it all again at the next Toronto Con in March but this time with the finished book in hand.

Just found out I’ll have a table to promote my book at Forest City Con on Sept. 23 and that I hope to do at least one panel at Hammer Con at the end of the month. Hope to meet a couple of you at those events.