On one of my research visits to Gerry Lazare and his wife Setsuko, Gerry said that he had recently received a phone call from someone who had written him a fan letter 40 years ago. Gerry said that the man’s name was Jim Aldridge and that he has had a career in art and design and also that they had made plans to get together in the near future. More curiously, Gerry also said that he still had the original letter and he read it to me to round out the story.

I did eventually get to speak with Jim and I asked both Jim an Gerry if I could reproduce the letter in my column and they both had no objections so I include it below with a brief interview with Jim. Jim is 85, two years younger than Gerry Lazare, and no longer has any of the Canadian Whites he talks about but he still loves looking at the artwork from these great comics wherever he can find it and most of all loves stories from these comics done by Gerry Lazare.  Jim was kind enough to speak with me last month so I follow the images of the letter with a brief interview.

IK: Jim, thanks for speaking to me about those war time Canadian comics and Gerry Lazare. Jim, I’ve always wanted to ask someone who bought these Canadian war-time comic books off the stands what the newsstands of the time and the wire drugstore racks looked like? What comics do you remember seeing during the war?

JA: Well all the American comic books like the Superman and Batman books stopped as well as all the old pulp magazines but pretty soon comics started popping up. I remember that there were a lot more Bell Features comics than any others and I saw quite a few Anglo-American comics with Ed Furness’ illustrations, of course, but not as many Maple Leafs or the Canadian Heroes. I remember that Freelance, done by Ed Furness, was one of the most popular characters at the time and I remember enjoying his stories as a kid so much

IK: When Gerry Lazare read the letter out loud to me that you wrote to him back in 1974, I could tell how much you were influenced by his artwork at the time. Can you tell me more about this?

JA: Yes, now that you mentioned it, I guess I was influenced by Gerry’s artwork… of course I was. As children, my sister and I were quarantined with all these childhood diseases which meant you couldn’t go out of the house for a month at a time. They put a big red placard on the front door explaining that the house was “quarantined” and nobody could go in. The milkman had to leave his bottles on the verandah.  I guess those were the days before inoculations for these things and this kind neighbor, every Friday night, when he came home from work (He felt sorry for us, I guess.), would bring home half-a-dozen comic books… and, of course, they were “Whites,” Cy Bell’s “Whites,” and I just enjoyed them. I drew everything in them and then I would draw from colouring books… anything… and my mother would encourage me: “That’s good drawing, Jimmy.” (It probably wasn’t but…) I would lay the big Sunday comics out on the kitchen floor, and I’d read them, and I’d started to dream about being a comic book artist.

But Gerry’s stuff seemed to have so much life to it. Lots of solid blacks and brush work. The “Whites” artists used their blacks so well because they didn’t have the luxury of colour. I did take a comic I did down to Cy Bell to see if he’d take it but, by this time, his business of producing Canadian comics was folding and he didn’t look at it. That original comic work I took down to Cy, my mother must have thrown it out along with all the comics had at the time. So I went years with all this in my mind thinking “If only I could see some of those old Whites again” and Gerry’s work primarily, because I worshipped his work, really.

The in the mid-sixties there was George Henderson’s shop on Queen Street and then he moved to Markham Street after, but on Queen Street I happened to see these old “Whites” in the window so I went in and he said he had a whole bunch of them, somebody had just come in and traded them in for some American books he was collecting, so I bought them from him. I probably paid $4 or $5 for each of them.

So when I got these “Whites” from George Henderson I read them once in a while and just analyzed them and I enjoyed them so much.

It’s funny because after the war I began working at Saturday Nite Press and actually took Gerry Lazare’s seat there. Then I got a nice raise by going across the street to J. Thompson Advertising Agency, and I ended up being an art director there for pretty well 20 years and then I went to Sears for another 20 years. (cartoon in letter clipped out of Campbell’s News and Views).

I never went to art school, I guess I should have, but I started out as a “junior” learning the business, washing out bowls and artists brushes. They took me under their wing and I learnt the business. I worked diligently and over the years I just… developed. I still do these one-panel cartoons for Woman’s World and these various trade magazines. I enjoy that creative outlet very much.

IK: Jim, thanks for telling us about your relationship with these old Canadian comic books and I hope that when you finally meet up with Gerry in the next couple of weeks (I know that he is looking forward to it very much), that you have a wonderful exchange of thoughts about those early years in Canadian illustration and both of your careers after that time. 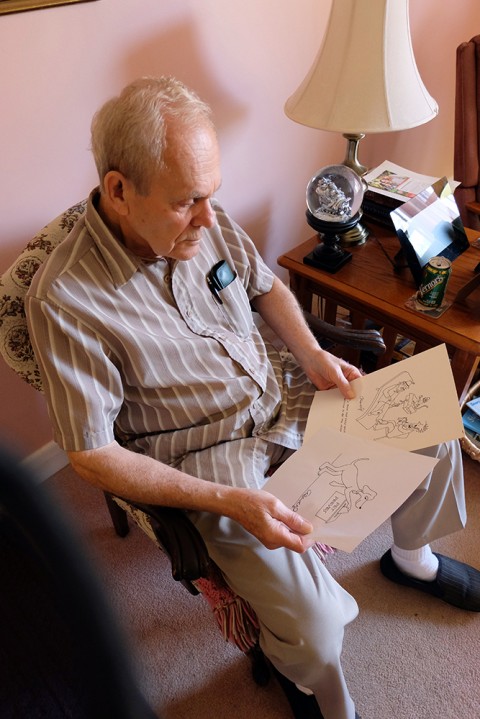