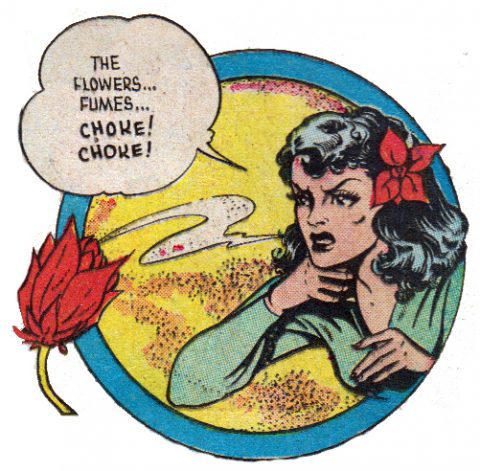 Let me put forward an analogy that, I think, sort of explains the nature of the four main Canadian WECA comic book publishers. If you remember, these four are Anglo-American and Bell Features—both based in Toronto, Maple Leaf Publishing based in Vancouver, and Educational Projects in Montréal. I’d like to try and line up each of their comic book outputs with what I think would be a parallel brand from the American Golden Age comic book industry.

Educational Projects and its main title, Canadian Heroes, is probably the easiest to line up with a golden age American company. It fits neatly in line with Parents’ Magazine Press with its titles such as True Comics and Real Comics. Both companies were really doing more journalism than adventure fiction. Their aim was to inform and edify readers through references to history and the world around us, especially with information about the on-going war. Remember, Canada Jack was just an after-thought that stuck.

Maple Leaf had solid production values. Its books remind me of the kind of output DC would send to the newsstands in the Golden Age. Tidy stories and art, with few rough edges. Brok Windsor, Sargent Canuck, Cosmo and his White Magic all solved mysteries and battled evil in a straight-up fashion like the lead Golden Age DC characters. Sure, Maple Leaf leaned more to the UK Boys Annual type of series than DC did, with examples such as Lucky Comics’ “Peter and Peggy and the Haunted Castle,” Better Comics’ “The Honourable Freddy,” Rocket Comics’ “Mystery Mountain,” and Bing Bang’s “The Madcap Major,” but the overall feel of Maple Leaf books seems to best align with DC comics in the Golden Age.

Bell Features reminds me of the Timely Golden Age brand. Bell’s panels and stories were more-cluttered and rawer than the other three Canadian companies. It had the most youngsters, like Gerry Lazare, drawing for it and they brought a youthful dynamism with them. Nelvana, Speed Savage, Thunderfist, The Brain, and The Wing seemed more properly related to Sub-Mariner, The Human Torch, and Captain America than to Superman, Batman, and Wonder Woman. Mr. Monster, who emerged in the final issue of Triumph Comics, couldn’t, for me, properly belong in the DC universe and had to ply his trade in a Timely/Marvel type of operation.

Anglo-American, on the other hand, always had the flattest and cleanest sort of art. It was uncluttered and simple, as were the characters. It reminds me very much of that same feel found in Fawcett’s line of books. Ed Furness’ fluid 2-D look would have fit perfectly into any one of Fawcett’s titles. It’s no small wonder that Anglo-American chose to align itself with Fawcett and start redrawing scripts for Fawcett’s main characters at the start of 1942. One of my old posts from four years ago takes a closer look at this. Anglo’s characters and stories had few sharp edges and tended to lack the texture of Bell Features and Maple Leaf characters and narrative. It also looks like Fawcett even helped distribute Anglo-American colour comics with Canadian heroes in them in the last half of 1945. This may explain why a number of these colour Anglos show up more commonly in the States than other WECA books. So, I put forward Anglo-American as the Fawcett of Canadian comics.

In this column, I want to take a bit of a look at one of Anglo-American’s features, the group called “The Crusaders.”

The Crusaders first appeared in Grand Slam Comics Vol. 1 No. 1 with the cover date of Sept-Oct. 1941. A month later, they also appeared in Three Aces Comics Vol. 1 No. 1, which essentially had the same line-up as the first issue of Grand Slam. The Crusaders were pals Paul Leighton and Bob Crawford who flew a super rocket plane from a secret spherical underwater hangar in the Atlantic. With this advanced airplane they fought evil in the world—first on earth against the Axis for a number of issues and then, eventually, they carried that fight onto new worlds in outer space. They took their name from the medieval Christian armoured crusaders who fought in the middle east. Our rocket ship Crusaders often left a large cross in the sky fashioned from their rocket ship’s exhaust after a victory. Along the way, the Crusaders picked up Paul Leighton’s sister, Lois, who also happened to be Bob Crawford’s fiancé as the third member of the team.

After these two first issue appearances, the Crusaders only continued on in Grand Slam Comics, but they did so as the lead characters in that title, and accounted for its first dozen covers up until Anglo-American began its involvement with Fawcett redraws at the end of 1942.

The series only had a few sporadic appearances through Grand Slam’s Captain Marvel Jr. period, but when, by the summer of 1944, Anglo-American broke off its romance with Fawcett characters in Grand Slam and Three Aces, The Crusaders were revived Three Aces Vol. 3 No. 9 cover-dated October 1944. They appeared in that title, skipping the odd issue, until the last issue dated Nov.-Dec. 1946.

The Crusaders were created by artist Edwin Leslie Gilpin (Les Gilpin) who was born on the outskirts of Belfast, Ireland in the small community of Holywood on May 5, 1906. Today, Holywood butts up against George Best Belfast City Airport. He was almost 10 during the Easter Uprising of 1916 and 15 when the partition of Ireland took place. This resulted in an increase in violence in Northern Ireland and at the start of December 1923, Les’ coal merchant father brought the family to Canada and settled in Toronto. Les was 17 and the second oldest of four brothers.

Les, possessing what must have been a broad Belfast accent, worked in Toronto as a salesman and married Mildred McMillan, a telephone operator, there in 1927. He continued to work as a salesman through the Depression but by 1940 was on the voters’ list as an artist. He was hired at Anglo-American shortly after that. According to Robert MacMillan, Ed Furness claimed that Gilpin was already at the company when he, himself, arrived. Furness’ first work at Anglo was Freelance Vol. 1 No. 1 dated July-August 1941.

The revival of The Crusaders in Three Aces Vol. 3 No. 9 initiates a very strange arc with a particular racist twist that needs to be called out. In this issue, the Crusaders, Paul, Bob, and Lois, are back on earth and encounter a crashed alien rocket. We eventually learn that the sole survivor is from a planet called Sirius Beta and is a member of the alien race called Jappani who first came to earth 10,000 years ago. They mixed with the primitive population of the time and started the Japanese ‘race.’ The present-day Jappani had sent that crashed spaceship to earth with the intention of retrieving key Japanese leaders and scientists, in the face of waning Japanese war fortunes, and bringing them back to Sirius Beta so that they could fight the Allies again in the future. With that plan failed, the Crusaders transfer the crashed alien spaceship anti-gravity engine into their own craft and try it out, but they are unable to turn it off and hurtle into space for an inevitable encounter with Sirius Beta and the Jappani aliens.

We know that during times of armed conflict, the ‘Department of War’ grants every man, woman, and child with a temporary driver’s permit for racial hatred and we seem to revel in this entitlement to hate, just like a sixteen-year-old with their first car. Canadian wartime comics were no exception to this rule.

The whole enterprise is made more palatable if we can make the object of hate more ‘other’ than us, less human than us, even non-human. Les Gilpin, if he was still writing the series at this point, gave a whole new meaning to the phrase “enemy alien” in this Crusaders arc. We couldn’t do this as easily with the Nazis because they were white and, in fact and ironically, saw themselves as a superior segment of the white race. Sure, we could caricature every arm of the Axis hyperbolically, but hatred of the Japanese was focused through the lens of racism much in the same way that the Nazis focussed their hatred of the Jews.

We all know that ‘aliens as disguised neighbours’ is a common trope in horror/science fiction comics through the Cold War Era, but I can’t bring to mind another instance in the Golden Age where racial differences were explained by extraterrestrial intervention.

Les Gilpin created the Crusaders and wrote and drew them for at least the first year. After that, he wrote the episodes while teaming up with Ed Furness for the art and by the Anglo colour period, it’s not clear who is doing the writing and who is doing the art. Les Gilpin was with Anglo-America until the end and was, according to Anglo letterer, Betty Mercer, the individual who informed everybody that the company was folding up its tent at the end of 1946 (see MacMillan).

Here are a couple of examples of The Crusaders from the Anglo-American colour period from 1945-46:

Besides, the Crusaders, Les Gilpin also created Commander Steel for Grand Slam Comics and reporter Sooper Dooper for Three Aces Comics. “According to Ed Furness, [Gilpin] was apparently an alcoholic and he eventually went or was sent to Fawcett in New York to work with C.C. Beck on “Captain Marvel”. Nothing is known of what happened to him there.” (from MacMillan).

There is a travel record of Les Gilpin going to New York City on June 25th, 1946 with the intention of working and making the stay permanent. The friend he was going to visit was artist Nick Zuraw who had drawn the “Keith Cornell” feature in MLJ’s Top Notch Comics Nos. 11-17 and the “Steve Stacey” feature in MLJ’s Blue Ribbon Comics Nos. 10-12 and, at the time of Gilpin’s visit, was working for Fawcett. 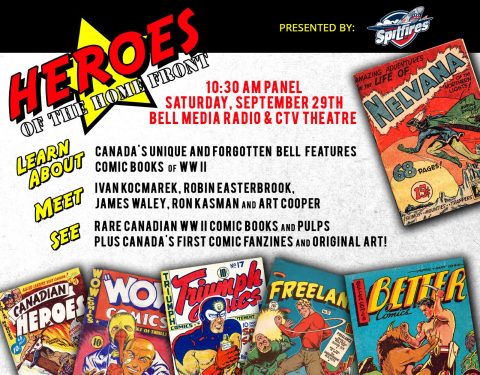 For those of you who will be in the Windsor area this weekend, I will be at Windsor ComiCon both Saturday and Sunday with friends James Waley, Ron Kasman, Art Cooper, and Robin Easterbrook. We will be at booth #506 with a display relating to the history of Canadian comics prior to Captain Canuck. I will have Heroes of the Home Front and my WECA Price Guide for sale and signing and Ron Kasman will have his great, period piece graphic novel, The Tower of the Comic Book Freaks, for sale and signing. James Waley and Art Cooper will also have related material available for sale and signing. We will all be part of a panel presentation of “Canadian Comics Before Captain Canuck” which will take place in the Bell Media Radio & CTV Theatre from 10:30 AM to noon on Saturday and we will also have Richard Comely, creator of Captain Canuck, for the last portion of the presentation. The presentation, therefore, will cover Canadian comics from Nelvana to Captain Canuck. We’d all love to meet and chat with anybody who can make it.