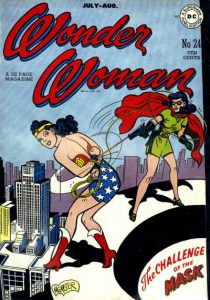 I think I did a half decent job with my Undervalued Spotlight #134. I think my argument on Wonder Woman #179’s significance still holds water almost 300 Spotlights later. Also, I don’t think the failure of Wonder Woman’s new direction surprised anybody. At the end of the day I think it came down to economics, boys preferred buying a Wonder Woman comic where she was helpless and tied up over a Wonder Woman cover where she’s toting a huge machine gun and taking charge of the situation.

Social change used to be so slow! The farther back in time you go the slower societies changed. What used to take centuries a millennia ago might have only taken two generations in 20th century and might only take a several years in today’s modern fast changing society. Just ask the older people that are ruing the days they lived practicing what they thought were social norms (at worst somewhat tolerated social norms) when they were young. Back when social change moved a bit slower historically judged transgressors were safely in their graves before they had to face the music.

I’m not sure where I wanted to go with that last paragraph. I think it was to point out that we needed a societal change in order for that new direction Wonder Woman if issue #179 to work and back then society was unable to change quickly enough thus we got all those Wonder Woman bondage/tied up/helpless covers between issues #200 and #221.

By the way some of the most collected and sought after Wonder Woman covers are those very bondage covers I mentioned above. It’s tough to sell a Wonder Woman #208, but I can sell Wonder Woman #205s and 207s all day long.

Someone could write a thesis what I covered above and I’m sure someone has.

Wow that was quite the drawn out segue into announcing this week’s Undervalued Spotlight as Wonder Woman #24.

I’ve performed a totally unscientific study of all the Wonder Woman covers in All Star Comics, Sensation Comics, Comics Cavalcade and Wonder Woman and I do believe I want to present Wonder Woman #24 as the very 1st Wonder Woman bondage cover. My exhaustive spiel above is supposed to help convince you that this is an important event.

We collectors love firsts in comics and if someone can verify it then I believe Wonder Woman #24 containing Wonder Woman’s 1st “bondage cover” is a very desirable and collectible comic.

But wait, there’s more! Wonder Woman #24 has another 1st, the 1st appearance of the female villain called the Mask. A few of the CGC labels I’ve seen for this book just state “Mask appearance” and the Overstreet Guide bunches the Wonder Woman issues #21-30 as a cluster with no mention of the Mask but comics.org, wikipedia and the DC fanbase site all list Wonder Woman #24 as the Mask’s 1st appearance. Looks like I have two letters to write.

Talk about thesis worthy material, the Mask is a tormented woman with a split personality who traps people in S&M themed masks that are rigged to dispense fatal gas. The Mask is one of the last characters developed by Wonder Woman creator Charles Moulton (whole universities could sprout up to study this guy!). Wonder Woman #24 was the last Moulton written issue published and thus the last pushing that oh so provocative Moulton agenda.

I’m writing this Spotlight within a finite time and am frustrated that my standard format may not capture the the historic complexity I wish to convey. In other words I could write a lot more on this if I had the time but I don’t so I’ll leave the further research to you the capable reader.

The market is respectful to Wonder Woman #24 but the book’s demand should be exponentially higher. Some recent sales have the book trading at about 1.5 x Guide.

The cover itself is a gem, easily the best Wonder Woman cover within ten issues on each side of it.