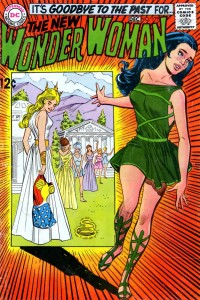 Not many superheroes made it out of the 1940s and the few that did were living on borrowed time. As a matter of fact only one superhero, not named Batman or Superman, that actually sustained a comic book title without interruption through the tough period of the late 1940s to the mid 1950s. That hero (or heroine) was Wonder Woman.

By 1954 DC ramped up the distribution of Wonder Woman from bi-monthly to 8 times a year. She’d keep this schedule through 1967 at which point the series moved back to bi-monthly. This is no small feat surviving, and even ramping up in those lean years, remember that the Flash couldn’t do it, and neither could Green Lantern.

Sales were sliding, something had to be done. What DC did was get writer Denny O’Neil (of Green Lantern/Green Arrow fame) and artist Mike Sekowsky (iconic Brave and Bold #28 cover was his) to totally reinvent the character. The change was signaled on the now famous cover of Wonder Woman #178. The traditional Wonder Woman costume was gone, in its place came the latest, hippest fashions the 1960s could throw at us. Super fly jump suits and striking mod outfits were now in.

While Wonder Woman #178 signaled this aesthetic change it was issue #179 that really changed everything. In issue #179 Wonder Woman surrendered her powers, choosing not to follow her fellow Amazons to another dimension. She stayed behind and in essence stopped being Wonder Woman. With issue #179 Diana Price was born as the lead character of the series, she was tweaked as a hip agent/spy/adventurer. With no powers she relied on her new Chinese mentor I Ching to teach her martial arts and weaponry.

What just happened? With Wonder Woman #179 O’Neil and Sekowsky basically got rid of Wonder Woman. A staple character for 27 years, one that survived where almost all others failed was now history.

This was an exciting development when you think about it. Here we have a creative team bold enough to throw the past out the window, and how nicely  all this fit in with the times. The late 1960s were a time of massive social change, there were civil rights, equal rights, the Women’s Lib movement etc. Along comes DC and messes with an iconic hero, one who’s very existence was an extension of creator William Marston’s perverse sexual fantasies of female submissiveness.

O’Neil and Sekowsky had set the stage for something revolutionary.

The 1969 Comichron figures show and average circulation of 171,000 for the title. The move to update Wonder Woman/Diana Prince seemed to have worked, the downward trend was reversed and the title even enjoyed a modest 3% increase in circulation.

I don’t have sales figures from the early 1970s but what I do know is that the Diana Prince experiment lasted 25 bi-monthly issues. Wonder Woman’s powers and old costume returned with issue #204 (Jan/Feb 1973).

Looking back its obvious an opportunity was squandered, O’Neil and Sekowsky (Sekowsky solo from #182 on) were perhaps too drunk on the sacrilege they were committing to notice that they could have created something important. The stories they created were mostly one offs, there was no common theme running through the run, there were no heavy social issues of the day being tackled aside from a couple of inner city episodes (perhaps O’Neil’s later social issue laden Green Lantern/ Green Arrow run was atonement for this). 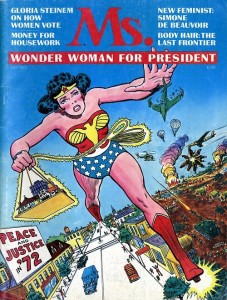 I find it odd that the leading Women’s Rights figures of the day, including Gloria Steinem, actively sought the return of the traditional Wonder Woman. They saw stripping Wonder Woman of her powers symbolic to stripping women of their rights. Indeed the 1st issue of Steinem’s Ms. Magazine (1972) celebrated the return of the costumed Wonder Woman (in issue #204) by putting her on the magazine’s cover. I wonder how she felt when she saw the covers of Wonder Woman #205, 206 and 207. If these represent empowerment… 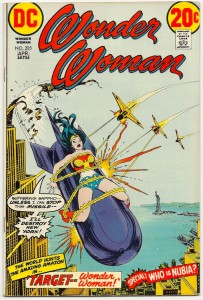 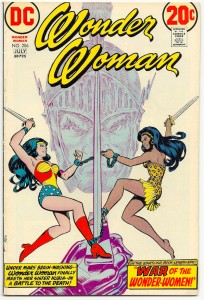 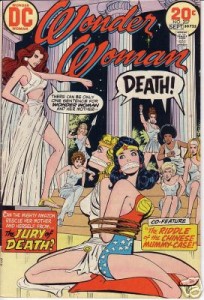 Wonder Woman #179 is an important comic book perhaps more so for what it could have been.

CGC sales data for the book is too sparse to consider, only 2 high grade copies have recorded sales over the last 12 months and the last sale is a CGC 9.2 for $132.