We continue our look at one of the greatest runs of comics in Marvel’s super-hero history: Jack Kirby, Joe Sinnott, & Stan Lee’s Fantastic Four. This is part three of the series and today we feature the tail end of the run, and we pick-up after the events in Fantastic Four #60. Doctor Doom has been vanquished, and the Inhumans have broken free… 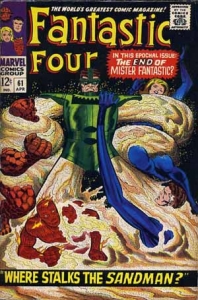 The Fantastic Four have just returned to the Baxter building after a battle with cosmic Doctor Doom, when they are attacked by weapons of Reed Richards own design. No rest for the wicked. The battle with the unseen provocateur continues device after device, with the Thing taking the brunt of the attack. We quickly change scenes to a Latverian castle where the still powerless Silver Surfer is captive and he is being taunted and beaten by merciless guards. Suddenly the Silver Surfer’s surf board returns to it’s rightful owner. Bad news for the guards. The now fully powered Surfer swears to turn his back on the horrendous human race and then turns his power on the castle and its occupants. He does not return until Fantastic Four #72.  Back at the Baxter building the Fantastic Four have learned the identity of their assailant – The Sandman! This new improved Sandman comes with a new costume, a new found knowledge of science, and worse he has a Norman/Harry Osborn wavy hair-cut. A face to face battle begins and then we breakaway to The Inhumans and their new home. Crystal begs Black Bolt to let her travel to see her love Johnny Storm. Black Bolt agrees, although she must travel with the dog Lockjaw the teleporter. A flash and she is on her way. The Fantastic Four’s battle with the Sandman has taken a turn for the worse. The portal to the “Negative Zone” has been opened and Reed Richards has been sucked inside and trapped forever. The three remaining members of the FF look on in horror. The Sandman escapes through a broken window at the side of the building. The days of beating the Sandman with a vacuum cleaner are long gone by. 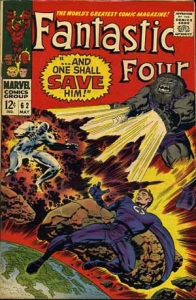 The Human Torch, Thing, & Invisible Girl watch helplessly as Mr. Fantastic hurls to certain doom in the Negative Zone. Crystal and Lockjaw arrive and she is quickly filled in on the gravity of Reed’s situation. She returns to Black Bolt for help. Black Bolt listens to Crystal and then chooses an unseen Inhuman to help. Meanwhile in the Negative Zone, Reed Richards has said his good-byes to everyone, and is pondering the mysteries of the Negative Zone. He see’s a spaceship speed by, one which left a deadly cargo in the same debris field that Reed is in. Crystal has returned with…. Triton. Triton’s physiology allows him to move about in negative space and he quickly enters the Negative Zone. He finds Reed and manages to get him back. They have also unknowingly brought a passenger –  Blastaar the deadly unwanted cargo left by the alien ship in the debris field. Blastaar sneaks out of the Baxter building and runs right into the Sandman. They form an uneasy alliance, one which will see in full force next issue. In the Baxter building many a thank-you and tears. The team is together again, but very much in need of some “alone time”. Unfortunately, this team doesn’t get to much of that…. 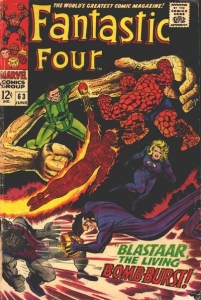 As this issue begins with the roof of the Baxter building being blown apart two minutes after the end of our last episode. This is a twenty- page battle issue from start to finish. Everyone get’s their chance at bat including Crystal and Triton. Blastaar The Living Bomb-Burst and the Sandman team-up to provide formidable opposition. In the end the Thing defeats the Sandman with a big punch in the ocean which disperses the Sandman all over the waterways. The rest of the team finally contain the exploding Blastaar with a helmet- gizmo from Reeds closet. Once the helmet is on Blastaar he is taken up to the Negative Zone platform and sent back. Blastaar becomes a well know villain in the Marvel Universe, battling the Avengers, X-Men, Thor and many return battles with the Fantastic Four. 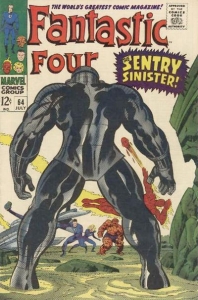 The boys are busy with their toys in the Baxter building shuffling equipment. The Thing & Susan Richards proclaim enough is enough – time for a vacation. Reed agrees and plans are set in motion. We switch scenes to an island in South America where a professor and his guide are searching for a lost civilization known as the “Kree”. They stumble on to an old installation on the island guarded by a Kree Sentry- # 459 who quickly puts the two in a prison of sorts. Ben, Reed & Sue are packed and ready to go on vacation. Love birds Johnny & Crystal, Triton and Lockjaw remain behind to chaperone and mind the store.

The Fantastic Four are like magnets to disaster the same way trailer parks are like magnets to tornados. We already know the island they have picked for vacation will be guarded by the powerful Kree Sentry and the battle royal begins upon landing. The battle isn’t going well and Sue makes a call back home for help. Lockjaw transports Johnny Storm to the island just in time. As the Human Torch he sways the battle back to even. An errant multiple laser intensity blast by the Torch ignites the Kree installation below and the island begins tear apart. The Thing finds the two prisoners and frees them. The gang all gather around Lockjaw and teleport out to safety. The Sentry stands by his post resigned to his fate on the crumbling island. The Kree are not done with the Fantastic Four or earth just yet. 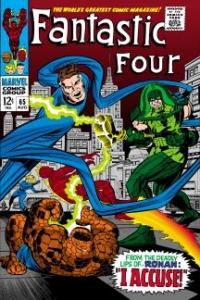 Fantastic Four #65
August 1967
From beyond this planet earth

The Fantastic Four are asleep and in the middle of a nightmare. They are being warned to expect the coming of Ronan the Accuser by the Kree’s Supreme Intelligence for the destruction of their outpost and Sentry. When they wake up they realize they have all had the same dream (a mind probe actually). They are not sure what to do. Next we meet Ronan the Accuser who is on his way to earth. He lands and observes mankind. We are apparently in the intermediate stage of our social development. The gang our out enjoying a day off when they are summoned by the Accuser to answer for their “crimes” against the Kree. The Fantastic Four are having none of it. Ronan begins to announce the trial and sentence. He has a powerful tool known as the universal weapon and he begins using it to devastating effect. Ronan is about to administer the final blow when… we switch scenes to Alicia Masters apartment. Alicia Masters! Where the hell has she been through all this? Well it turns out Alicia has been hearing voices in her room. She thinks she is losing her mind. We see that she isn’t, as a mysterious form takes her by the hand and they walk right through the wall of her apartment. The set-up for next issue. Back to Ronan!! The never say die Fantastic Four devise an attack on Ronan and temporarily immobilize him and more importantly the universal weapon. Ben has Ronan in a bear hug and rolls him to the ground, the weapon goes off and Ronan vanishes. Reed hopes the Kree now know the people of earth can and will fight and that they leave us alone in the future. 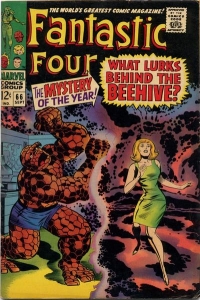 Fantastic Four #66
September 1967
What lurks behind the beehive?

As this issue begins Ben, Reed & Sue have reached the apartment of Alicia Masters and she is not there as we know. Ben is feeling pretty sorry for himself and swats Reed when he tries to console him and leaves the apartment. Reed laments his inability to find a permanent cure for Ben. We switch to Alicia Masters whereabouts. She has been taken by four noted doctors and professors, who have faked their deaths in order to work on a special project. Alicia is wanted by them for her skills as a sculptress and for her blindness. She performs a “test” of her skills and she is deemed worthy by the professors. A quick jump back to the Fantastic Four finds Ben Grimm walking about as the Thing and meeting people who actually care about him, a group of teens, a police officer and a good looking lady all convince Ben he is loved by the public and no one see’s him a just a gargoyle but a hero. Back to Alicia. Him has broken free and guards are sent to contain him. The compound is in total panic and Alicia wants to know the whole story. It turns out these people are working on a new race of “perfect” human beings. They are getting close to developing Him but he projects a blinding light and no one can get near Him. They want Alicia to enter his chamber and sculpt his face so they know what Him looks like. Back at Alicia’s apart Reed has devised a gizmo/projector that will react to heat and show what happened in the apartment. It works and Reed goes to work on a way to trace Alicia and the stranger. As this issue comes to a close, Alicia is about to enter the blinding chamber of Him and all she can feel is hate. 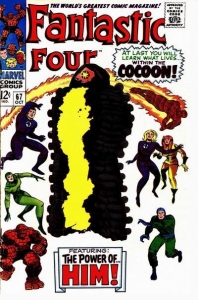 We’ve reached the final issue of the run and it’s a doozy. Reed Richards is busy working on a bracelet to duplicate and follow Alicia and the stranger. Tensions are running high and we switch scenes to Alicia and Dr. Hamilton who have entered “lock 41” containing Him. Alicia feels Him calling to her and is not afraid. Meanwhile we discover that the team of scientists working on Him are as mad as hatters, and developed Him so they could take over the world. They plan on destroying Him and starting over as they can’t control this version. Back at FF HQ, Reed has developed the bracelet and are on their way. Alicia has reached Him. He has yet to be born and is in a large cocoon. Alicia and Him are communicating and he trusts her but not the others, he knows their intent. The Fantastic Four arrive and all hell breaks loose. Him kills Dr. Hamilton and promises to protect Alicia. The Fantastic Four break through all the guards and make it to Alicia. They are not sticking around to find out how this ends, they quickly exit stage left, enter the grid and head home. The people remaining at the installation are not going to be so lucky. Him emerges from the cocoon looking like a golden Greek-god. He confronts his creators and announces he will be leaving for space and will be destroying this installation in the process. I still think Him should have had a golden surf board.

The 46th Overstreet Prices for the books reviewed are listed below. Issues number 65 through 67 continue to remain strong given the Kree & Warlock speculation for movie appearances in Guardians of the Galaxy, Avengers, & The Inhumans. I think issue #65 still has the most room to appreciate.

This completes our review of Fantastic Four issues #44-67 plus the six annuals. If the order of review seems a little ass-backwards, it is because I am reviewing these in the order of my own personal favourites. We will dive into the first forty-three issues of this iconic run in future posts of Arcs and Runs.

Hope everyone is enjoying the heat!