In March 1970 the axe fell on the original X-Men, and after 66 issues suspended publication. They returned in December of 1970 in reprint form with issue #67 and published bi monthly until issue #94 when the all New X-Men took over the title in August 1975.

I’ll have to save that paragraph for a column I plan to write about those overvalued X-Men reprints, X-Men #67-93.

We’ll use it today as well. This downtime period for our favourite X-Team might have also put a few bad guys out of work, but not our Arcs & Runs guest of the week Magneto. Magneto took this time to battle as many other super teams he could find and solidified his standing as one of Marvel’s all around biggest bad guys.

Let’s take a quick look at Magneto’s rampage through the Marvel Universe while the original X-Men were in their “Hidden Years”. 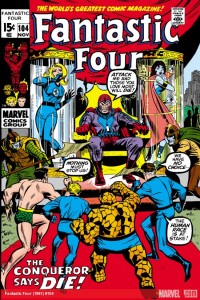 Cover art for all of these books are by John Romita and John Verpoorten who also do the interiors for issues 103 and 104. The interior art on issue #102 is famous for being Jack Kirby’s last work (with Joe Sinnott inks) on his first incredible FF run #1 thru issue #102 plus the first six annuals. To be certain a mind boggling body of work. John Romita takes over from Kirby for the next two issues so Marvel certainly let the fans down gently on this change of artists. The stories are written by Stan Lee.

Magneto wastes no time getting back into the thick of things. Following the events of X-Men #63 in which he appears to perish, he is found by the Sub-Mariner and his army on the beach. Namor’s team nurse him back to health all the while Magneto is trying to trick the Sub-Mariner into leading his army into a battle against humanity and the Fantastic 4. It doesn’t take much persuading. While Namor and the FF begin to battle, Magneto gathers bargaining chips Sue Storm and Lady Dorma as hostages. With both of these women in his grasp Magneto forces the FF and Namor to surrender. Magneto takes over the Atlantean army (not much loyalty there) and attacks the surface world. The Thing, Human Torch, and Namor fight Magneto and the army while Reed Richards does what he does best. Reed builds a new device aimed at containing Magneto and his magnetic power out of plastic. The device is completed and deployed in the proverbial nick of time and all is good. We leave issue #104 with Magneto beaten and trapped in Reed’s anti-magnetic barrier, all this before the X-Men can even come back in reprint form.

Next stop for Magneto is a visit with another super group The Inhumans in the pages of Amazing Adventures. 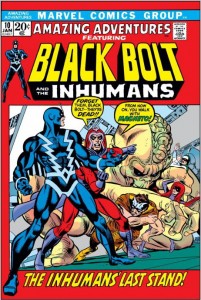 Amazing Adventures #9 is one of Walt’s Nov. 1971 books that was supposed to be a double size $0.25 book but was reduced to a $0.20 single at the last minute. Two Gun Kid #101 and Creatures on the Loose #14 also missed the double size treatment on their titles. Amazing Adventures has been a split book with the Inhumans and the Black Widow through the first 8 issues. The title of these two full length issue’s is Black Bolt and the Inhumans.

Our tale begins with Medusa, Gorgon, and Karnak searching the bowels of San Francisco for Black Bolt. Black Bolt has been captured by Magneto who has mistaken him for a mutant. While captured Magneto tells Black Bolt of his escape from the Fantastic 4 anti-magnetic barrier. Medusa, Gorgon, and Karnak are caught by Magneto and his mutant minions, and subsequently break free. Black Bolt also breaks free and in a very brief fight takes Magneto out as he vanishes in an explosion of another doomsday device. This isn’t one of my favourite Magneto stories, seems a little weak (like this re-telling). The Black Bolt and the Inhumans story continues and concludes in Avengers #95 as they battle with Maximus the Mad. Issue #10 is their last appearance in Amazing Adventures and their next appearance is Avengers #127 and FF#150 the wedding of Quicksilver and Crystal.

Magneto is not having much luck with these new super teams, so it’s time to head back to familiar ground and take on a few of the original X-Men and the Avengers +2. 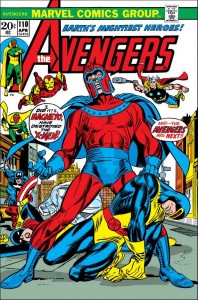 Our tale begins in the Avengers mansion where they receive a communication from the missing Avenger Quicksilver. He survived the battle with the Sentinels (Avengers 104) and was found by Crystal of the Inhumans who nursed him back to health. They have also fallen in love and plan to marry. Everyone is happy. The Scarlet Witch breaks her news about herself and The Vision and it goes over like a lead balloon with Quicksilver, who rejects the idea of his sister hooking up with a robot, and vows not to return unless this union is ended. What a jerk! Before much else happens another communication comes in this time for Professor X at the school in Westchester which is in obvious distress. The Avengers leave immediately and arrive to find X-Men HQ in ruins. Cyclops, Marvel Girl, Iceman, and Professor X down for the count. They are attacked by dinosaurs and Piper the mutate from the Savage Land, and then again by Magneto disguised as The Angel. Magneto has the upper hand and presses his advantage, capturing Captain America, Iron Man, and the Scarlet Witch. Thor, The Vision, and the Black Panther are buried in rubble but escape. They need re-enforcements and head to San Francisco for help in DD #99.

Hawkeye has quit the Avengers in issue #109. He heads out to San Francisco to pick up with his old girlfriend the Black Widow, only to find out she is teamed up with Daredevil. Hawkeye and Daredevil duke it out a couple of times to a stalemate, and then they decide to let the Black Widow choose which one she is going to stay with (how thoughtful). Natasha is having difficulty deciding when our three Avengers arrive with their request for help. Hawkeye declines. Another Jerk! The Black Widow and Daredevil agree to help and join the Avengers in issue #111.

Magneto has developed the power to control people’s will by controlling the iron in their blood stream. Pretty cool. Thor , the Black Panther, the Black Widow, Daredevil and the Vision take on the controlled X-Men and Avengers in a tense battle that is not going the good guy’s way until the Mutate Piper turns and strikes Magneto knocking him out cold. The Vision using his intangibility powers to take over Piper saves the day. Kitty Pride would be proud. With the battle over the Black Widow decides to stay behind with the Avengers and officially joins the team. This caught me a bit by surprise in rereading this book, as I thought she had joined a long time ago. A great move by the Avengers. On behalf of myself and my fellow drooling hyenas who like to watch her (portrayed by Scar-Jo) in the movies – thank you.

One more stop for Magneto and a new supergroup, The Defenders. 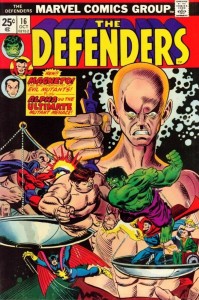 Charles Xavier enlists the aid of the Defenders through contact with his old ally Doctor Strange to battle Magneto. Magneto’s latest plan to take over the earth is by growing his own Ultimate Mutant – Alpha. The Defenders track Magneto to his secret underground lair where they are confronted by The Brotherhood of Evil Mutants and are defeated and captured. The Defenders break free but not before Magneto unleashes Alpha the Ultimate Mutant. The Defenders and Professor X are routed by Alpha and the Brotherhood and are left behind in the rubble as Magneto takes Alpha to the United Nations. Once there Magneto holds the UN hostage until they declare mutant kind to be the rulers of earth. Magneto commands that Alpha lift and suspends the United Nations building in air as a demonstration of his power. The Defenders break free once again and tackle Magneto and the Brotherhood of evil mutants at the UN. The ever evolving Alpha see’s this and decides to pass judgement himself as to who is worthy of punishment. He choose’s Magneto and turns him back in to the age of a baby. Alpha moves into outer space to continue his evolution and our story comes to an end. We don’t see Magneto again until The New X-Men issue #104 as a baby with Eric the Red, however that is a story for another day.

Magneto was a pretty one-dimensional character (human hating maniac) throughout most of the silver and early bronze age of Marvel comics. He doesn’t really start to become a fully fleshed out character for me until the X-Men #148-150 storyline. I am certain we will be visiting him again in a future Arcs & Runs.