The Avengers movie has arrived and as expected it has been a huge hit. We have featured many of the characters and first appearances of Avengers in Arcs & Runs this year.  Before leaving the Avengers I thought we should take a look at two more, Quicksilver and the Scarlet Witch who both played a more integral role in the movie than I thought they would. I guess just mentioning them in Avengers #53 won’t suffice.

Quicksilver (Pietro) and the Scarlet Witch (Wanda) are founding members of the evil super group the Brotherhood of Evil Mutants. This group of baddies was lead by alpha dog Magneto. Mastermind and the Toad rounded out the team. Super evil teams were forming all around the marvel universe at this time. The Fantastic Four had the Frightful Four, the Avengers had the Masters of Evil, and the X-Men drew the most natural enemy in the Brotherhood.

So let’s look at them as they arrived in the pages of X-Men, and they just happen to show up first in my favourite early X-Men book… 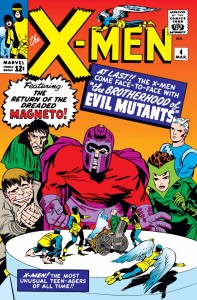 Our tale begins with another workout in the danger room for the members of the X-Men. It is quickly followed by a celebration and cake, marking the one year anniversary of “classes” at the school. We change scenes to a different dinner table, with Quicksilver, The Scarlet Witch, Mastermind, and the Toad sharing this table. From the minute you first lay eyes on our future Avengers we know they don’t belong there. We find out later that the Scarlet Witch was once saved by Magneto from an angry mob that was ready to burn her at the stake. She is indebted to him. Quicksilver is along for the ride but not convinced that Magneto’s hatred for Homo sapiens is justified at this point. Magneto and Professor X have one last meeting of the minds before they formerly draw lines in the sand. Magneto on the side of mutants and Professor X on the side of all mankind, mutants and Homo sapiens alike. Magneto has plans to rule the earth and sets sail for the small republic of San Marco to establish a base. He quickly takes over the small country with the help of Mastermind and illusions of a great army attacking. Would have scared me too, it looked like a division of Nazi soldiers complete with the goose step march! Eventually the X-Men arrive and a 10 page plus battle begins, with the Angel and Quicksilver hooking up first followed by the Scarlet Witch and the rest of the Brotherhood. The battle finally starts to swing in the X-Men’s favour however; Magneto has laid not one but two booby traps. Professor X saves his X-Men by throwing himself in front of the first one and he is critically injured as a result. The second one is more deadly, a small atomic device, and Quicksilver races back to disarm it before returning to Magneto and the others. He does not want see other innocent people killed by this bomb, but promises no mercy to the X-Men in their next encounter. The X-Men are left with their injured leader wondering what will happen next.

X-Men #4 and Avengers #4 are two of the very best comics of the sixties in my opinion, and remarkably they both came out in the same month (March 1964)!  What was in Jack and Stan’s cereal ? Although I do find it hard to pick just one book from any title, if I had to pick, X-Men #4 would be my favourite book of the early run of the X-Men. 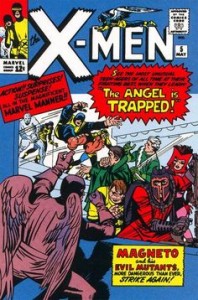 The creative team remains the same as the previous issue.

We pick up right where we left off last issue with injured Professor X being taken back home. Once there they change into their regular clothes and have a surprise visit from Jean Grey’s parents. They manage to survive that but we see Mastermind is searching for the X-Men not far away. Magneto and the Brotherhood now have an asteroid base (a real step up from that old freighter last issue). Magneto still sees the X-Men as a threat that needs to be eliminated; although Quicksilver and the Scarlet Witch disagree they don’t leave. Magneto has a plan to draw the X-Men out from hiding and the Toad is the bait.

The X-Men are watching a track meet on TV. One of the contestants sticks out like a sore thumb jumping and hopping over the other runners. The crowd gets angry and the X-Men go to save the lad thinking he is probably a mutant. The X-Men arrive and quickly “save” the runner, Hank McCoy (aka the Beast) soon figures out that the young athlete is the Toad and the arrival of fellow evil mutants confirms they have fallen in to a trap. Magneto captures the Angel while the others battle. The Brotherhood, Magneto, and the Angel leave aboard Magneto’s ship back to the home base asteroid. Once there Magneto begins a series of mind tortures on the Angel looking for the X-Men’s secret base. All is not lost. The Brotherhood has left the Toad behind and he seems lost. The X-Men follow the trance like Toad who calls for a ship to pick him up. It arrives and the X-Men join the Toad aboard and up to Asteroid M. Once there they have a spirited 6 page battle and free the Angel. Once again Quicksilver and the Scarlet Witch rebel against Magneto, this time the Scarlet Witch uses her hex power to save Cyclops from suffocating to death. The X-Men arrive back at HQ to find a fit as a fiddle Professor X.  He was faking his injuries to see how the X-Men would perform without him and he announces they have passed with flying colors. Teacher’s sheesh! 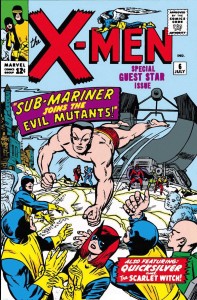 Professor X and Magneto both have a wing footed mutant on their mind as a powerful ally. The always brooding Sub-Mariner to be exact. Professor X and the X-Men are in a race with Magneto and the Brotherhood of evil mutants to find the undersea monarch. It is Magneto who finds the Sub-Mariner first. The Sub-Mariner is not interested in allying himself with a surface dweller (he had a bad experience with The Hulk in Avengers #3). Magneto is no dummy – he applies sugar in the form of the Scarlet Witch. Subby is attracted to her; just then the Angel arrives on the scene. The Sub-Mariner is not amused, he fly’s up to meet the Angel and then fires him back from where he came. Professor X puts his X-Men on alert just as Magneto strikes with giant horseshoe magnet. The X-men dodge the attack and push on. Quicksilver is sent to attack the X-men but is captured by them. The Scarlet Witch is concerned for her brother as Magneto presses forward with his attack, talking to her in his usual demanding/condescending voice. The Sub-Mariner has seen enough. He will not ally himself with anyone who speaks thus to a female. The Sub-Mariner is then attacked by Magneto, and at the same time the X-Men arrive. Magneto, Mastermind, and the Toad escape, leaving the Scarlet Witch and Sub-Mariner behind. The Scarlet Witch demands the X-Men release her brother, they refuse and the Sub-Mariner steps into the fray. Mercifully Professor X arrives before his X-Men get clobbered and the Professor releases Quicksilver from his mind control and they return to Magneto. We get a BAH! from the Sub-Mariner and he leaves vowing to never to ally himself with a surface man again. He will return and re-claim the surface world someday. Before he can do that he will still have to break free from Magneto’s magnetic beam, which he does and he returns to his undersea throne once more. The X-Men are thrilled he has not joined Magneto. You have to love those bahs from Marvel’s early comic days. Doc Doom led the villains in that lingo. 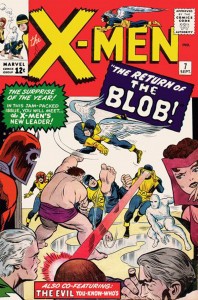 The same creative team as the previous issue.

I love the splash page of issue #7 and the title of the book reminds you of an old Steve McQueen movie. The X-Men are celebrating their graduation when the Professor tells the X-Men he is leaving and will appoint a new group leader of the team. Meanwhile back with the baddies, Mastermind is still hitting on the Scarlet Witch to no avail. Magneto reveals he has a new plan to destroy the X-Men. Back to the X-Men and Professor X, he is taking Scott Summers (aka Cyclops) into a portion of the headquarters building he had never been previously allowed to see. It turns out that it contains Cerebro the famous mutant detecting machine developed by Professor X (that were seeing for the first time). The Professor tells Scott he has been selected as the teams new group leader. Scott protests to no avail, he’s got the job whether he wants it or not. Magneto and the Brotherhood are on the trail of The Blob. The X-Men first met him in issue #3. He did not want to join the X-Men so the Professor put a mental shield on his brain to hide him from Magneto and he remained in a carnival. Magneto has found him and after a bit of rough housing his memory has returned and worse he wants to join the Brotherhood. Cerebro has detected the now active Blob and the usual hook up with the Brotherhood and the X-Men begins. The X-Men look outmanned by this new unit. Luckily Magneto blunders and sends 3 torpedoes at the X-Men but hits the Blob instead. Stunned but unhurt the Blob has had it with mutants and walks away. Magneto and the rest of the Brotherhood escape to battle the X-Men another day..

Quicksilver and the Scarlet Witch are at a tipping point in terms of leaving Magneto, and soon they shall joining the Avengers in issue #16.

The Brotherhood of Evil goes through many iterations in the future with Mystique as the leader, and future evil mutants like the Blob,Rogue, Pyro, Avalanche, Unus, and Destiny to name a few. Hail the bad guys and gals and good luck filling your want lists!

The 44th Overstreet Prices are as follows: