A couple of weeks ago my brother gave me a shout and asked if I wanted to go see the Ant-Man movie. I had been meaning to go and see the movie but somehow never had made it to the theatre, and it was now in its seventh week since release. We went to a 10PM showing and I expected it to be basically like a private screening for my brother and I given the amount of time the movie had already been out.  To my surprise there were over 50 people in the theatre. The movie was terrific. It went for laughs and got them. It also had just the right amount of everything else to be a fun summer movie. Highly recommended, I enjoyed the movie so much it inspired me to pull this post forward a few months and post today.

Before we get to the comics, a quick bit more about the movie. Ant-Man opened with little fanfare and a box-office opening weekend of only $57M which was seen as a bit of disappointment at the time. The movie didn’t go away though, through social media word started spreading around this was a pretty good movie and its box office performance improved. To date the movie has grossed $176M domestically, $218M abroad, for a total gross of $394M. The movie cost $130M to make. Those kinds of numbers usually mean you will get a second bite at the apple. The movie itself left some open and unresolved plot lines that could be explored in a second movie.

I didn’t personally get a chance to “live” the Ant-Man when he first appeared on the Marvel comic scene. I wasn’t alone. He arrived and departed very quickly as a headlining character from the Marvel universe. I count only sixteen comics (Tales to Astonish #35-48, Fantastic Four #16, and Avengers #1) where the costumed Ant-Man was front and center, plus his initial prototype issue Tales to Astonish #27. The time span January 1962 thru October 1963 is surprisingly short given the impact the character has had in comics.

My introduction to Ant-Man came through reprints in Marvel Tales and Marvel Collector Item Classics. Imagine my surprise to find out he was Doctor Henry (Hank) Pym whom I had known as Giant Man and Goliath. He later became Yellow jacket (a character I hated) and created a monster named Ultron. If Mr Pym had created one more persona I would have named him Strait Jacket and had him hauled away for professional help. He was clearly becoming unhinged by Avengers #59.

Still, you have to love old Hank and his Ant-Man creation. Let’s take a brief look at some of his adventures in Tales to Astonish now. 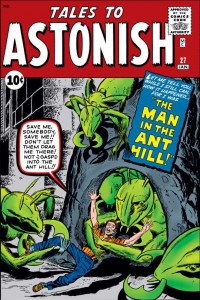 We begin our look at Ant-Man with the granddaddy of all Marvel pre-hero comics Tales to Astonish #27.

Doctor Henry Pym discovers a serum that can shrink whatever it touches. He also has the restorative antidote. Doctor Pym decides to test it on himself and he shrinks to ant-like size. This experiment is met with all sorts of peril, like landing in honey, being dragged by a colony of ants to their lair. Luckily for the good doctor a friendly ant saves him and he returns to normal size and destroys his serum deciding it was too dangerous to use.

This book turned out to be the prototype issue for Ant-Man the super-hero. It was the first Marvel comic to take a character directly there monster/horror age of books into the Marvel hero age of comics. The comic itself, like many from this era is a certified dog to find in grade. In all my travels to comic book stores I can only remember seeing one raw book that graded out at about 9.0. Right now most collectors would be happy to find a nice 5-6.0 copy and that would still be very expensive undertaking. 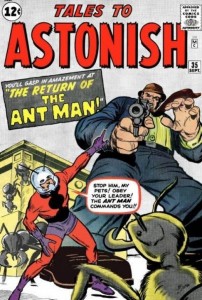 Tales to Astonish #35
September 1962
Return of the Ant-Man

Eight months later the comic book spinner racks are introduced to a new Marvel super-hero in costume The Ant-Man. Doctor Pym has had second thoughts about his shrinking serum, focusing on the positives it could bring to mankind. The story hero is more about the making of Ant-Man. His suit filled with serum/Pym Particles that allow him to shrink and regain full size. Next we have his helmet which allows him to communicate with the ants. The story itself has the Ant-Man taking on and defeating the favourite enemy of the day – evil communists depicted in stereotypical fashion as Asian, Russian, and Fidel Castro type characters. At the end of the story Ant-Man wonders if his services will be required again. This first appearance of Ant-Man in costume is a much sought after minor key book in the Marvel Universe. 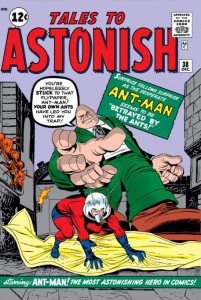 Tales to Astonish #38
December 1962
Betrayed by the Ants

We move forward to Ant-Man’s first encounter with the criminal mastermind Egghead. Throughout Ant-Man’s brief run there was a distinct lack of quality bad guys for him to fight. His rogues gallery had characters like The Hijacker, the Protector, the Voice, Time –Master, Comrade X, and Kulla to name a few. These were mostly one and done characters. Egghead did prove to be different, returning to menace Ant-Man in Tales to Astonish #45. His career of crime did not end with Ant-Man, forming versions of the Emissaries and Masters of Evil to plague the Avengers.

In this issue a group of gangsters have determined they are not smart enough to beat the Ant-Man so they decide to hire criminal consultant of sorts (Egghead) to capture Ant-Man. Egghead agree’s to do this for the whopping fee of $10,000. His plan is to trap Ant-Man by tricking him to land on a piece of flypaper, with the help of his own ants. This is what you get when you hire a consultant. It doesn’t work of course and the Egghead is left befuddled. He get’s better and more dangerous with time. Egghead always looked like a sinister Mr. Weatherbee (Archie comics) to me. 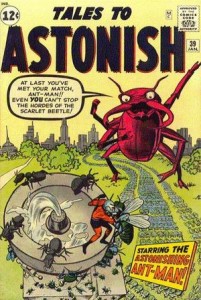 This issue is here as a guilty pleasure of yours truly. I always like a story with radiation changing something into an either good or a bad entity. There are loads of these stories in Marvel comics. In this story a common beetle is turned Scarlet by exposure to radiation. He is now evil and possesses telepathic abilities over all insects and he set’s them on the march against all humankind. A terrifying thought actually. The Ant-Man and his loyal ants oppose the Scarlett Beetle and a royal battle ensues. The Ant-Man eventually subdues the Scarlet Beetle and Doctor Pym cures the beetle by removing the radioactive elements from its body. The now harmless beetle is released to face the perils of living in Doctor Pym’s backyard.

The Scarlet Beetle would return in Marvel’s Bronze Age in an Ant-Man back up story in Iron Man #44. The Scarlet Beetle was once again going to terrorize the world when a gas can falls off a table apparently crushing him to death. It doesn’t take much to derail world conquest for these little guys. 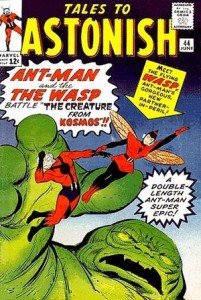 Tales to Astonish #44
June 1963
The Creature from Kosmos

This is the second minor-key issue in the run and introduces the character the Wasp.

Doctor Henry Pym is lamenting the loss of his wife Maria (brief history follows) and he realizes he needs a partner to get him through his dual life as a doctor and crime fighting hero. Enter Janet Van Dyne the daughter of a famous gamma scientist. Her father is killed while experimenting with a gamma beam and in fact has brought a killing creature from another dimension (Kosmos) to earth. Janet contacts Henry Pym and in very short order volunteers to become the Wasp, complete with wings, helmet, and Pym particles.

The two team-up to defeat the Creature from Kosmos. This is a much abbreviated synopsis for a very good book. Janet Van Dyne’s introductions to the Marvel universe and her subsequent long time partnership with Henry Pym are the key features of the book.

Tales to Astonish #44 has been a hot book for some time now.  I owned a really nice copy of this book once, and I can’t for the life of me remember what I sold or traded it for. I wish I had it back now. I suppose almost anyone who has collected comics for a period of time has a few of those “ones that got away” stories. 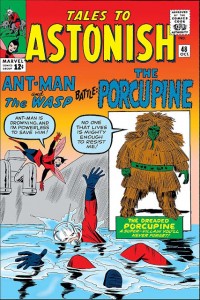 Tales to Astonish #48
October 1963
The Porcupine

We have a very short story synopsis for this book. The Ant-Man and the Wasp meet the Porcupine for the first time. The Porcupine becomes a long-standing character in the Marvel Universe. End of synopsis.

Now please LOOK at the cover of this book and try not to laugh. I am chuckling to myself right now as I look at it. It is a split cover with our hero the Ant-Man in deathly peril drowning in the kitchen sink! The Porcupine is even better. I can’t tell by looking at his mask if he is going to spit a poison dart or if he is in fact an ant-eater. The rest of the costume looks like it was made up from a roof of some poor eastern European village.

Most importantly this would be the last official Ant-Man comic in its run of Tales to Astonish comics.

In the following issue of Tales to Astonish (#49) the Ant-Man turns into the Giant Man.  Giant Man had the power to also become the Ant-Man if and when required, but Ant-Man did not headline his own comic again until the Bronze Age Marvel Feature #4.

Ant-Man does have one cross-over book in Fantastic Four #16 and a battle with Doctor Doom. Ant Man and the Wasp are founding members of the Avengers and in fact pick the name for the team on the last page of Avengers #1. They both go on to become long term members of the team.

45th Overstreet values for the comics reviewed today are listed below.

The Scott Lang version of Ant Man that is featured in the Ant Man movie is featured In Marvel Premiere #47. More on this book can be found in Walt’s Undervalued Spotlight # 201. See you next month!