On behalf of all of us at Highlander Herocon, I just wanted to thank you for being part of our con. You were a wonderful emcee, guest, interviewer, bon vivant and raconteur. Any other con on the planet would benefit greatly from hiring you to work for them. I hope you enjoyed yourself, and experienced something new and exciting.

The Guy In The Really Cool Con Shirt

Actually, I had an awesome time, TGInTheRCCS. Thank you. And I did see something new. Something I had never seen before..

We’ve all seen Dollar Boxes, even quarter boxes, but it wasn’t until I started rooting around under one of the tables at Highlander Herocon that I encountered a sign that offered comics for a dollar a pound.

Of course, if you do the math –Average comic book weighs about 4 ounces; Pound is 16 ounces; so four comics to a pound–  there’s not much difference between a dollar-a-pound and a quarter-a-book, but like most bottom-dwellers, I couldn’t pass up a chance to fill some holes in my collection and out-maneuver some dealer. I mean, there had to be all kinds of gems in there that I could discover, right?

You see, I’m a big believer that you can learn something, from everything.  And I gleaned some valuable nuggets of knowledge from the comics I bought for a dollar-a-pound. Allow me to show you: 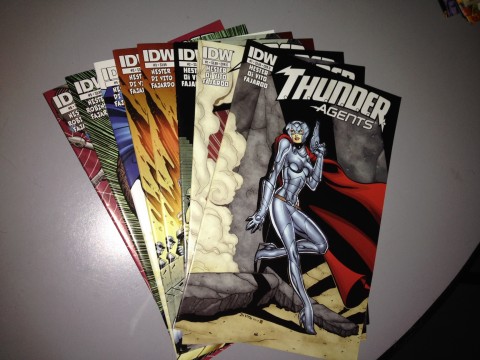 — I learned that sometimes a series takes more than a few issues to hit it’s stride. This book always looked good, and did a decent job of capturing the whole super-spy attitude of the original Tower series. But it wasn’t until Issue #8 that things kicked into high gear, with a combination of original characters re-done, and new characters introduced. It was the best T.H.U.N.D.E.R. reboot yet. Which unfortunately was also the last of this run. 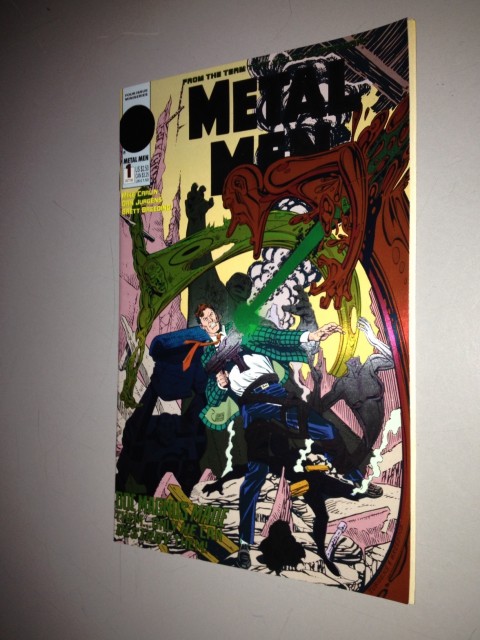 —Notice near the top where it says “From the Team That Killed Superman”, which wasn’t Luthor and Brainiac, btw, but Mike Carlin and Dan Jurgens. They tried to breathe new life into the Amazing Alloyed Avengers, with a cool concept that Will Magnus’s robots were actually inhabited by the souls of flesh-and-blood people. Suddenly, Gold, Tin, Lead, Iron, Mercury, and Platinum weren’t these easily-replaced constructs rolling off the assembly line every time one got an acid bath from Chemo. It went four issues. I am buying the other three. 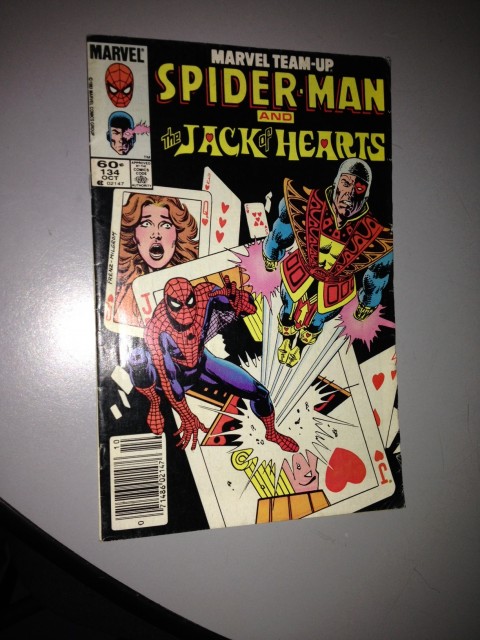 —What can I say, I’m a fanatical Jack-of-Hearts aficionado. Jack teams up with Spider-Man with a story that actually contributes to both characters’ mythos. Marvel was making an attempt to provide continuity with the title, and I appreciate that. Unfortunately, I learned that my eyesight has drastically deteriorated in the last 32 years because I could barely read the book! Were they printed on Bounty Paper towels with the mimeograph machine from Ortona Elementary School? 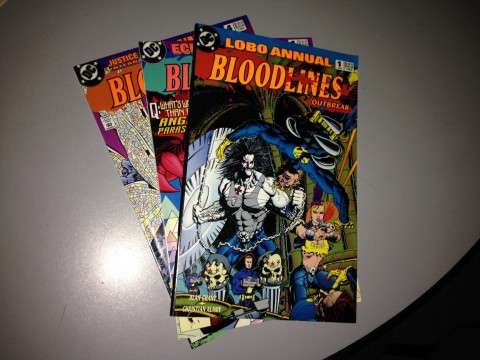 –I learned that in the early 1990’s, DC wanted to be Image. The Bloodline books were annuals in the existing comic lines where new heroes, new villains, new locales, new supporting characters, new Everything were introduced. Of course, you know that such unforgettable characters such as Geist, Jamm, Mongrel and Razorsharp. And of course you know that when I said “unforgettable characters” I was being ironic. Nothing stuck from the Bloodline books, except for the character Hitman. And he doesn’t show up in any of the three I picked up. These classics (more irony) featured Lionheart and Prism. Terrible books.

Oh, and I also learned that Lobo used to be fairly interesting.

Next time, I’ll wrap up my score from the Dollar-a-Pound boxes, with one of Marvel’s first forays into universe-spanning Events, tributes to Jack Kirby, and work that Didn’t Work from two of the greatest comic book artists ever.