It is October – Halloween is just around the corner.  We need a spooky character for this month’s Arcs & Runs. After scouring around a bit I headed to the deadest genre of comic there is – the Western and my favourite western character the Ghost Rider.

The Ghost Rider as a character has been around since the late 1940’s. The story goes that artist Dick Ayers was doing a character called the Calico Kid in Tim Holt comics for the comic company Magazine Enterprises. Vince Sullivan the publisher sat Mr. Ayers down and told him they were going to change the Calico Kid into a new character called The Ghost Rider. Mr. Sullivan explained he got the idea for the Ghost Rider from singer Vaughn Monroe’s 1948 hit song Ghost Riders In The Sky. Dick Ayers began working on the new costume, and Vince then told Dick to go see Disney’s The Headless Horseman/Legend of Sleepy Hollow this was the type of effect they wanted from the Ghost Rider character. Ray Crane the editor also had his hand in the creation of the character. This is a very small sliver of a Dick Ayers/Ric Estrada interview printed in Comic Book Marketplace #98 in January 2003. The full interview is worth checking out.

I remember Dick Ayers mostly for his work on the Ghost Rider 1950’s and the 1960’s run we are going to look at today. It is only a very small sampling of his work which included over 100 issues as the primary artist on Sgt. Fury, countless inking jobs for Jack Kirby during his Atlas/Marvel monster and super-hero days, even some DC work on Jonah Hex, plus many others.

Westerns in general were having their last hurrah in terms of popularity in the late sixties before fading from view in the early seventies. I did enjoy these simple stories. They had very little grey in them, just right and wrong, and quite a few redemption plot lines. Let’s take a look at the re-birth of the Ghost Rider.

Art by Dick Ayers with a little help from Herb Trimpe on issue #7. Inking by Vince Colletta and George Bell. Stories by Gary Friedrich with Dennis O’Neil helping out on issue #7 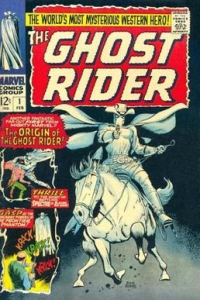 Ghost Rider #1
February 1967
The Origin of the Ghost Rider

We meet Carter Slade school teacher on his way to his new job in Bison Bend. Along the way he witnesses an “Indian” attack on some settlers. Carter Slade does his best and joins the fight only to find out these were not Indians but white men posing as Indians. He catches a bullet for his trouble and is near death when he is saved by Jamie Jacobs a young lad who is the only other survivor of the attack (his parents are killed). Jamie try’s to get Carter help but passes out from exhaustion himself. The two are found by a real Indian tribe and are taken back to their camp. The bands medicine man Flaming Star witnesses a sign from the Gods that Carter Slade has been chosen by the Son of the Spirits to be their great white champion. Carter Slade is bestowed with The Ghost Riders powers and a white horse named Banshee. While he is in the Ghost Riders costume Carter Slade is taken over by the spirits and speaks like an over the top theatre actor. Carter Slade leaves with Jamie. Back in Bison Bend the disguised Indians turn out to be cattle barons trying to run off settlers. Carter Slade arrives in town and quickly changes into the Ghost Rider defeating the Bartholomew gang with eerie ease. The recently orphaned Jamie Jacobs moves in with Carter Slade and is the only person who knows that school teacher Carter Slade is the Ghost Rider. A Kid Colt Outlaw #105 back –up story is also included. 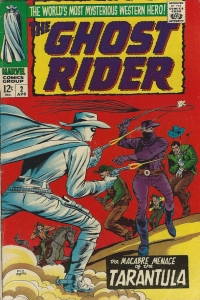 Ghost Rider #2
April 1967
The macabre menace of the Tarantula

We meet the Tarantula for the first time. He would go on to become the Ghost Riders most prolific villain in terms of appearances. A bullwhip is his stock and trade and he and his gang tackle the Ghost Riders home turf only to be defeated handily by the mysterious Ghost Rider and his side kick Jamie. A Kid Colt Outlaw #99 back-up story is also included

A circus arrives in Bison Bend and the whole town comes out to see it. A sub plot in the Ghost Rider story continues to play out. Another school teacher Natalie Brooks has caught the eye of Carter Slade; the only problem is she is currently engaged to Clay Riley and out of bounds. On top of that her brother is the sheriff and he wants the Ghost Rider as bad as JJ Jameson wants Spider-Man. Worse a cougar is on the loose in the circus. The Ghost Rider gets into the action and sorts out a who done it between the ring master and his brother-in law. A Kid Colt Outlaw #116 back up story is also included. 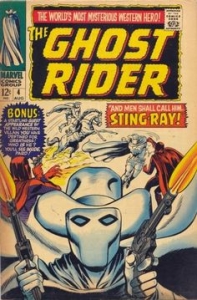 Ghost Rider #4
August 1967
And men shall call him Stingray

A new costume villain named Stingray arrives on the scene. He has a paralyzing pistol that shoot a dart that can paralyze its victim for 20 minutes. He has a cool costume to boot. If he seems a bit familiar to Marvel western comic fans look no further than Rawhide Kid #57 when this same criminal was called the Scorpion. In this issue he kidnaps Natalie Brooks (apparently the only female in town) and holds her for ransom. The Ghost Rider rescues Natalie from the Stingray who also turns out to be the new town druggist. Ben Brooks the Ghost Rider obsessed sheriff shows up and has a clear shot at the back of the Ghost Rider. There is a whip crack and the sheriff loses his gun. The Tarantula has returned and proclaims that the Ghost Rider is his partner in crime, setting up the next issue. A Two Gun Kid #69 back up story is also included. 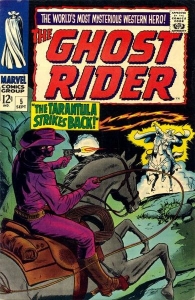 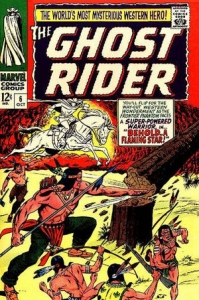 Carter Slade receives a powerful stone from his friend Flaming Star. It will make the Ghost Rider even more powerful than before.  It is of course stolen immediately and the rogue Indian Twelve Oaks becomes giant powerful problem attacking Flaming Star’s tribe with the stone around his neck. Meanwhile back at Sheriff Ben Brooks home, the future health of Natalie Brooks is the topic of the day. The doctor feels an operation in Denver may save her legs, but the trip to Denver may kill her. Back to the Ghost Rider who is in it deep battling with Twelve Oaks. In the middle of the battle Twelve Oaks collapses and dies. The strain and power of the stone was too much for Twelve Oaks who Flaming Star reveals with great sorrow was his own banished son. 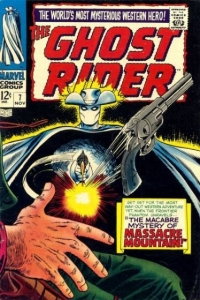 Ben Brooks, Clay Riley, and Natalie Brooks are there way by wagon to Denver for her operation. Carter Slade is riding on ahead keeping the coast clear although the other three don’t know this. He has his Ghost rider costume with him just in case. Just in case shows up in the form of a crazed mountain man, who captures Carter Slade first followed by the other three. The Mountain Man conveniently keeps Carter Slade separate from the others, so when he changes into the Ghost Rider they never knew he was there. A battle ensues and the mountain man is killed saving Natalie who has mistaken for a previous lost love. The Ghost Rider takes a hold of Natalie and plans to take her to Denver as the story ends. I am bit excited for the next issue which will feature a favourite villain of mine from the Two-Gun Kid – Hurricane!

As it turned out issue #7 of the Ghost Rider would be the last on the title as the book was cancelled after this issue. A bit of a cold ending to the title I would say. I wouldn’t be cheated out of my Ghost Rider /Hurricane showdown though. A new series – Western Gunfighters (1-33 August 1970 – November 1975) featured the return of The Ghost Rider in the lead story for the first seven issues. The untold Hurricane story was featured in Western Gunfighters issue #3. Carter Slade is killed in issue #6 and he is followed in death by his brave little side-kick Jamie Jacobs in issue #7 trying to keep the spirit of the Ghost Rider alive. The mantle then falls to Lincoln Slade, Carter’s brother who dons the costume and rides off into the sunset with Banshee. The future tales of the Ghost Rider (renamed the Phantom Rider) are for another day.

The Ghost Rider series of books (1 through 6 only) were reprinted in 1974 as The Night Rider. The name was changed as Marvel thought there would be confusion between the newly emerged Johnny Blaze motorcycle riding Ghost Rider and the western one. Sheesh.

List below are the 45th Overstreet Price guide values for the books in today’s Arcs & Runs.

Have a happy Halloween everyone!