This past Saturday Jeet Heer had an article in the Globe & Mail about Captain America entitled “A pop culture Rorschach test”.  I like Heer because he has a deep understanding of the comic community, plus he’s Canadian.  Reading the article I noticed it was a lot of quotes and not much of his own voice; I honestly don’t see the point of the article.  I was struck by John Cassaday being credited with writing Captain America.  Here’s the relevant quote: 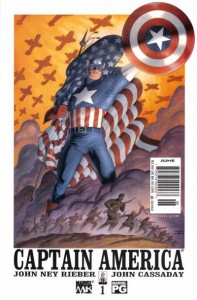 Writers like Mark Waid, John Cassaday and Ed Brubaker have all used Captain America to make allegorical statements about contemporary politics. “Waid reiterated the Engelhart vision by having Cap stripped of his citizenship for defying government policies in pursuit of justice,” Prof. Costello notes. “Cassaday’s storyline emphasizes the need to avoid racial stereotyping in the wake of 9/11, as the Captain protects Arab-Americans from attacks, but also pushes for a sophisticated understanding of the sources of terrorism and anti-American sentiment by suggesting that terrorists might have some actual grievances against the U.S.”[/quote]

Stated above is that John Cassaday wrote the Captain America storyline mentioned, Captain America (2002) issues one to six entitled “A New Deal”.  The writer credited on those issues is John Ney Rieber, and it’s clear-cut that the quoted professor is just wrong.  At first blush I thought that was a pseudonym but Rieber has a long string of comic writing credits to his name.

It could be argued that the person with incorrect information was Professor Costello who credited Cassaday with writing the article, but shouldn’t that have been pointed out by the author?  Being editor in chief I spend a lot of time proof reading and fact checking articles here on Comic Book Daily and I’ve made some mistakes.

I guess it boils down to whether a writer should leave quotes without comment or quote and attempt to provide the most accurate information possible.