So I’m trying something a little different this week.

I usually write the column in one shot and then go away for a few hours and come back and edit before setting it to post.  This week, I’m going to write and add as the week goes on up until Wednesday night (regular posting time for me so the editors have time to make sure I’m doing an ok job). 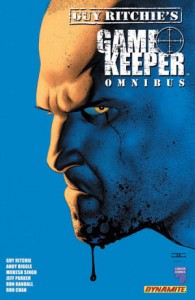 Anyone else remember Virgin Comics?  I scored a great find in Silver Snail’s discount bin. I had picked up a few issues of Guy Ritchie’s Gamekeeper when it originally came out but missed the later half of the series. I found the hardcover for $5.  Great story and fantastic art.  My hunting online has turned up an omnibus edition from Dynamite that contains the second mini as well as the first which I may pick up.  Apparently my hardcover is a limited edition of 1500 … no idea why. Anyone know if Dynamite picked up the rights to all of Virgin’s books or just this one?

Lot of DC rumors floating around today.  Apparently Batman Inc will be back next year (HURRAY!) and rumors have sprouted bring George Perez on as writer and artist of Superman. I guess DC can sort of hear me because last week, Perez was my third (unprinted) choice to take over Wonder Woman.  But to have him write and draw Superman would be interesting.

E3 is on this week so my brain may become distracted by video games… YAY HALO 4!!! 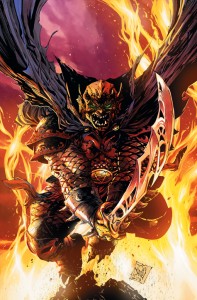 More DC news, the best of which is Paul Cornell writing The Demon in a book called Demon Knights. I was hoping my yellow-skinned rhymer would be back and DC couldn’t have selected a better writer for him. And more integration for Wildstorm as Voodoo from Wildcats is getting her own title.  Five bucks say she’s not stripper anymore.

Ed Campbell has reported on his blog that Dwayne “The Rock” Johnson is in talks to play Roadblock in the sequel to the GI Joe live action film. Great casting but this might mean the film won’t film for a bit as Johnson has already expressed an interest in being part of the next Fast and Furious (the current sequel made a crap ton of money) as well as his return to pro wrestling (for at least Wrestlemania next year where he will face John Cena).  The bright side? Maybe they can write a film worth watching this time.

The DC relaunch machine is turning it up a few notches. Grifter has officially been announced as has Static Shock. Rob Liefeld is on Hawk and Dove (at least for one issue) which will be nice to see in a nostalgic sort of way.  Red Robin’s new costume in Teen Titans is six shades of terrible. I’m not so sure why this idea works for The Falcon but not Tim Drake but it doesn’t. Urgh. I imagine that’s the new Raven in the background unidentified and the chick with weird 90’s armor/mechanical arm stuff is probably the new Beast Boy…er woman…er…something.

The interesting thing is the fact that Marvel seems to be letting DC’s media barrage run it’s course as opposed to sending out news of their own. I imagine however that Marvel is going to gear up for Comic Con even harder than they might have before.

Marvel, if I could suggest something that might make a dent. Moore and Gaiman’s runs on Marvelman might be a good suggestion.

Fan Expo has announced they’re bringing Martin Landau to Toronto. Yeah, I know, not very comic related (in terms of my column) but the dude was in the best Tim Burton film ever (and one of my all time top 20), Ed Wood. For those of you who said Big Fish, Beetlejuice, Batman or Edward Scissorhands, you are wrong.

For the two of you who said Willy Wonka… I’ve got a 2×4 with your name on it.

(At this point I have to put on pants and leave for the Blue Beetle Dinner Club… whether I was in my boxers or just wearing shorts, I’ll leave to your imagination.)

Man… if you are ever in Barrie, Ontario, buying comics, head over to Big Bone BBQ… highly recommend the pulled pork and the smoked chicken wings.

At the comic shop the talk turned pretty quickly to the DC relaunch. The customers that spoke of it just felt that despite DC’s reassurances, that this whole relaunch would eventually fizzle and go away much like Heroes Reborn. Moat people groaned at my joke that the regular DCU would return in an event titled “Crisis on something or another” but conceded that I was probably right.

And there you have it.  A half a week of talking of comics.  I kind of liked this style of column and may try it again in a month or so.