I love my comic shop.

For whatever reason, the Blue Beetle attracts a customer base very similar to me that I can relate with. People who can not only talk comics but can talk about world events and tv, etc etc as well as the nerd stuff. This week our conversation turned to an initiative that the store is doing in conjunction with it’s sister store to become more involved with local libraries and high schools with their comic book buying.

When I first heard them talk about this a while ago, I thought it was a brilliant move. One, it’s a pretty untapped market and lot’s of potential revenue that for one reason or another, I’ve never seen a shop go after.

I was about three or four. My family lived in Acton (I think… Acton or Milton) and we have a family cottage in Georgian Bay. My Dad used to spend entire summers there as a kid and for most of my childhood, we’d pack up the car every weekend and head north usually meeting up with my grandparents on the way. Now as with most children, I was a bit of a talker. In fact so much so, my Grandfather had to figure out a way to shut me up. He noticed at this stop on the highway that I seemed to be fascinated by the comics. He bought me one. To this day I’m not certain what issue it was but I’m fairly certain it was an Incredible Hulk. The Abomination was in it (he cries at one part) and at the end of the issue, the Hulk gets hooked up with this awesome blue laser rifle vest thing. And that was it, I was pretty much done.

I ended up getting a fair amount of those gift packs I’ve mentioned in other columns as well as buying random issues at a store called Picnic Island in Honey Harbor. I never even entered an actual comic shop until I was twelve. A lot of the comics ended up destroyed but a few are bagged and boarded in a long box and despite not having covers and being a little torn, they are very precious to me, any time I pick them up, they bring back memories of those trips and my limited memories of my grandfather who passed when I was five.

But the thing is, I doubt this happens much anymore. My story isn’t much different then a lot of guys my age or older. I know for instance Mark Waid’s experience is very similar. But between portable dvd players, video game systems and the lack of spinner racks in road side stops, how I got into comics is probably a thing of the past.

But what I wouldn’t have given for comics to be available at my library. Public or school. The concept makes the six year old Brent bounce off the walls. Going into a library and getting a trade, the idea just makes me smile.

But what should libraries stock in terms of comics?

That’s where our discussion went into.

It’s a fine line libraries have to sit. Partially due to funding and then partially due to content. Unfortunately from the conversation I had, it seems that books get a little more wiggle room then comics. It was mentioned that one library pulled the first trade of Fables due to a brief scene of nudity but yet Catcher in the Rye is not only on shelves but being studied. Now this is not to say Fables is as note worthy as Catcher in the Rye by any means (it’s a great comic but not that great) but it does shows the difference. You can talk and describe nudity, sex, etc but you can’t actually show it.

Which brings us back to, what should libraries stock? Do you go with safe supper hero books and mix in one or two more slightly adult titles? Do you go with a lot more tie in graphic novels and manga? I ended up giving the matter a bit of thought and I think I’ve come up with a good lists of books for everyone that libraries can put on their shelves. 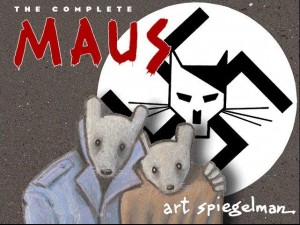 This goes without saying. The only graphic novel to win a Pulitzer, Maus is not just the story of Nazi Germany, it’s also the story of a father and his son. This represents the best of what you can do with comics and in a lot of ways the best you can do in modern writing. 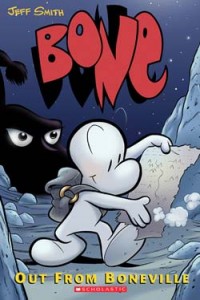 Funny, well written, well drawn and great for ages 10 to 400, the only reason not have this book on the library shelves is many kids already own it. 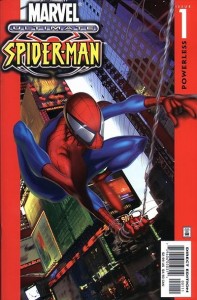 It’s really a toss up. The original is a very good look at where comics come from but not going so far back that kids won’t get them. Ultimate Spider-Man however is the same thing but redone for a modern audience. Either would fit nicely. 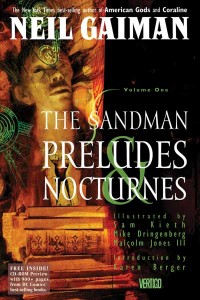 The Sandman (suggested for smarter kids and older teens)

The Sandman was Neil Gaiman’s best work. It’s a good example of episodic storytelling from start to end. The only problem is that the content is at times can be adultish but the more gifted and older kids and teens will be okay with it. I was introduced to Sandman when I hit fourteen and it blew my mind to the possibilities of visual storytelling. 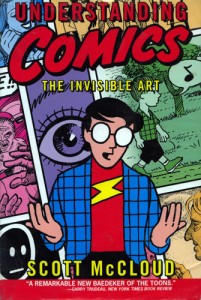 Part history book, part graphic novel, this book takes you through the medium by using the medium. Not only should it be in every library but any librarian doubting that comics are “books” should be given a copy of this and a copy of Maus and then asked two weeks later what they think.