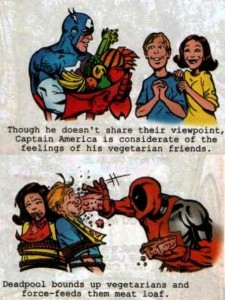 Okay well maybe not everywhere but everywhere in the comic rack. Deadpool seems to be this year’s flavor of comic book. Created in the early 90’s as a villain for the New Mutants/X-Force, his current rise began just before the Wolverine movie came out but seems to be coming to fulls team as of late.

Why has this occurred? What is so awesome about Deadpool anyways? How long will it last?

Well the simple answer is that this happens at Marvel every few years. For whatever reason, a decent character suddenly storms the racks for a while and then depending on readership will decide on how much stays and how much goes.

Deadpool isn’t the first to receive this kind of treatment and probably won’t be the last.

But before we get into the nuts and bolts of Deadpool’s current rise to fame, let’s quickly look at a few others.

The Punisher is probably one of the most well known.  He first got his own ongoing solo series in 1987 but by the early 90’s, Mr. Castle had caught on and was starring in three ongoing series, a slew of one shots, a magazine and numerous guest appearances including some in the non-Marvel universe comic The ‘Nam.

Put in 1995 the over saturation got to be too much and everything was canned. He would come back in stops and starts include Marvel’s Marvel Edge line (that’s where the bad ass characters went in the 90’s cause they were too extreme…or something).

A lot of Marvel villains got similar treatment during this period. Venom and Sabertooth for instance were featured in a variety of comics, mini-series, guest spots, teams, etc.

Which brings us to Deadpool.

Most likely spawned by Deadpool’s appearance in the Wolverine film and what was supposed to be his own up-coming film (although lord knows if and when this will happen), ‘Pool has currently two ongoing series and a slew of mini’s, one shots and guest appearances either finished, in the middle of or are in print.

And you can’t blame Marvel for trying. If I had a movie coming out based on my columns, you’d better bet it’d become a daily column and I’d be pimping the crap out of it.

And to to answer your next question, I’d be played by Guy Pearce.

But beyond that Deadpool is a popular character because he’s kind of like bad ass Spider-Man. He quips jokes, he’s funny but he shoots rather big guns and makes things explode. He’s also slightly insane and talks to himself which many of us can relate to.

The other factor that was pointed out by my co-host on TATANS, Adam Grant, is that Deadpool when written well can be funny in single frame format.

Take these panels for instance:

Those jokes are funny and I have no idea what the context to the rest of the issue is.

As for how long the current Deadpool trend will last… I give it another few months before the decline starts setting in and eventually we’ll be left with one monthly Deadpool title and there will be another flavor of the month.  If I was laying bets…Thor seems a pretty good candidate. He has a movie on the way, you can easily do a mini-series or two with him and various spin off characters plus movie comics, etc.

I’m waiting for a Batroc the Leaper revival myself.

Brent Chittenden is a freelance writer based out of Ontario, Canada who also co-hosts Two Assholes Talking About Nerd Stuff. When not writing or podcasting, Brent trains zebras to do his bidding. It’s pretty easy as they feel slighted by both man and horse.