After doing my usual comic book website reading, I noticed that Doomsday was set to return to the DC Universe, but apparently not running into Superman. While I think a lot of his original impact has been lost, Doomsday happens to be part of one of my favorite storylines in comics.

Funeral For A Friend. 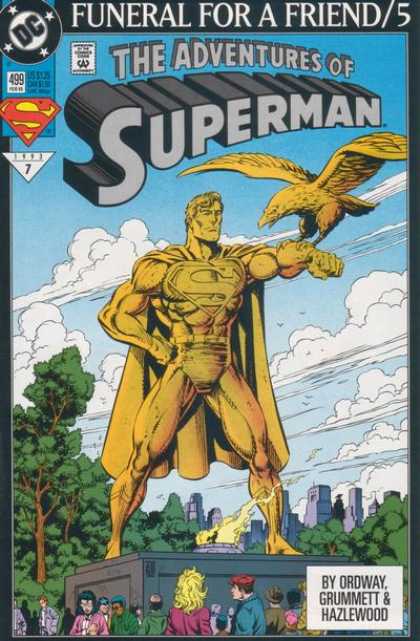 I know. You were thinking that I was going to say the Death of Superman. Don’t get me wrong, I rather like that storyline and to this day I still love Doomsday’s introduction, just this engine of destruction with no back story. Sometimes the best ideas can be the simplest and I think when Doomsday lost some of his mystery he lost some of his coolness. 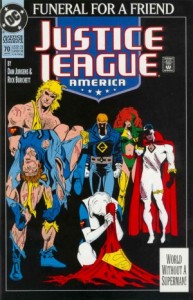 No, the real payoff and one a lot of comic writers and editors could learn from was Funeral for a Friend which ran in the various Superman titles from January until June 1993. This storyline essentially just dealt with lack of Superman in the DC universe. But what made the story unique was how it was told. We got superhero stories, small personal stories, a look at the how the globe dealt with its most powerful citizen not being there. Even Lex Luthor got a bit of the spotlight, although at this time Lex was in a cloned body and pretending to be his son or something. It worked so well because this was a character fans had always had and now we didn’t. Sure we knew he was eventually coming back but I think the slim possibility that Supes might be dead made the reader open up more to Lois Lane’s heart-break.

Lois’s situation was one of those really interesting points that I liked. Lois is caught in a bit of a trap. She was in love and engaged to Clark Kent. She is also known to be friends with Superman. Clark goes missing at the same time Superman dies. She isn’t allowed to grieve per say but yet at the same time she has to do something. Clark’s parents are in a similar boat. It’s both complicated and simple storytelling at the same time.

I think that’s the problem with a lot of the mega events that happen in comics now. The event happens and then we go straight into the next event instead of fully exploring the results of the first. Take Civil War for instance. There could have been a solid two years worth of stories set in the aftermath. World War Hulk is another example. We saw bits and pieces but let’s be honest here, Hulk nearly cracking the planet open would cause a lot of problems. Why not deal with some of them? Let’s use Knightfall for example. 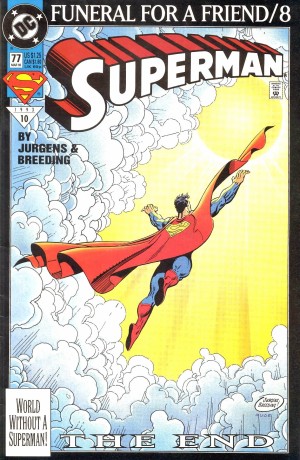 Knightfall ran through 93 as well but had less of an impact for a few reasons. Yes Bane broke Batman and such but there was no lack of Batman per say. A new guy came in and took the suit (and then built himself a new one). While Knightfall is largely remembered the rest of the storyline is pretty well forgotten at this point. Part of this has to do with dead hero burnout but the other part is there was nothing remarkable about the rest of Knightfall story after Bruce Wayne’s back is broken. Honestly think about it for a minute. Any idea what happened after that point? Or how Bruce got his spine repaired? Me neither, I had to look it up on Wikipedia. And to be completely honest, I don’t remember much about Knightfall at all other than Bane breaking Batman. Funeral for a Friend despite not having Superman in it, I can remember a ton of things purely from memory; The Clinton’s at the public memorial, the Justice League fulfilling Superman’s Christmas responsibilities, that slightly chubby guy at the bar praying for God to take him instead of Superman.

One of the few stories I think is an example of how it should be done is The Death of Captain America. There was a long time where the title star of the comic wasn’t in it. It was a good slow build that dealt with actions and their consequences. It didn’t just jump from Steve Rogers dead to Steve Rogers alive, it dealt with the death and all its ramifications.

Maybe it’s something publishers should look at when planning the next big hero death or next major event. We all know Superman will be back but how badly we want him back depends on how badly you make us care.