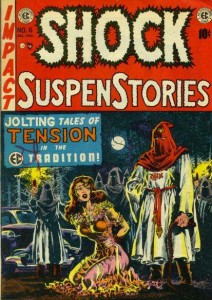 There, I’ve said it.

Horror fans have started getting an interesting rep within the last decade. It’s kind of like being a card carrying member of the Kiss Army. You’re constantly tested in that group of fandom; what your favorite movies are, how many time you’ve seen an Argento flick, or who has met Bruce Campbell the most, etc. And much like being in the Kiss Army, a lot of people on the inside take it very seriously and a lot of people on the outside look at you strangely.

That being said, I tend to be a middle of the road horror fan. I’m a big fan of intelligent horror (the works of Clive Barker for example) but I also love 80’s slasher flicks, I am a particular fan of the collected stabbings of Freddy and Jason. That being said, my love of horror in comics tends to be a real weird mixed bag and with Halloween only a few days away, I figured I’d share my opinions.

Anyways let’s get to my faves and why.

Walking Dead
What can you say about this series that hasn’t already been said? Robert Kirkman’s on this series is a lot of slow burns. Sometimes it takes awhile but when you finally get there it’s like Disneyland…a Disneyland full of zombies…and people die…a lot. Charlie Adlard’s work on the comic is at a top level every issue. I am also not entirely convinced that the two main characters of Rick and Carl Grimes will make it to the end of the series which is a good thing mind you. Makes the series less predictable. The other great thing about this book is like all good horror it not only shows the horror of zombies but also the horror of man. Not sure what I’m talking about? Start reading and wait till you get up to the part where they take over a prison.

Tales from The Crypt
I love the old EC titles and Tales from the Crypt is probably my favorite. As with all anthologies, the writing can be spotty at times as can the art but when both things come together…magic. The tv series ain’t too bad either. I only wish someone would but these out in affordable reprints, a lot of up and coming artists and writers could learn a few things from this series. Don’t get me wrong, the hard covers that are available are well worth the money but a cheaper price point could introduce new readers to the wealth of good material contained within.

Hellboy
Part monster series, part supernatural thriller, part superhero comic, Hellboy delivers in so many respects to all sorts of genres of comic that not to at least own the a good chunk of the series should be punishable. The characters while sometimes fantastical, tend to be relate able

Swamp Thing
Most people are going to figure I mean Alan Moore’s run on the book. Truth be told, you’re half right. I love Alan Moore’s run. It’s very smart and very inventive and turns the series on it’s ear but at the same time, Len Wein and Bernie Wrightson’s runs (while not as long) is also pretty good. And the character design, I have always loved the design of Swamp Thing, just his over all look is awesome.

So there’s a couple of titles to get you started. If you’d like some music to listen to while you’re reading, check out my recent post over at Explore Music where I talk about spooky music.

And my last plug for this week. If you happen to be in Barrie, Ontario on Saturday (Halloween), I will be up at Blue Beetle Comics recording an episode of my podcast along with my co-host Adam Grant and special guest Comic Book Daily’s own Pete DeCourcy. If you’re in the neighborhood, stop by and chat.

Brent Chittenden is a Canadian based freelance writer. He is the co-host of Two Assholes Talking About Nerd Stuff. When he isn’t writing, he’s looking for work and building a shed….in the woods.