Sometimes the giants walk the Earth and remind you of how awesome their might is.

Case in point. New comic day, I head to the Blue Beetle as I know a new issue of Buffy is out (due to an msn conversation). I’m scanning the shelves trying to find something else to bring back with me and chuckling at the fact that yet again no Image United issue 3. And then I see it. 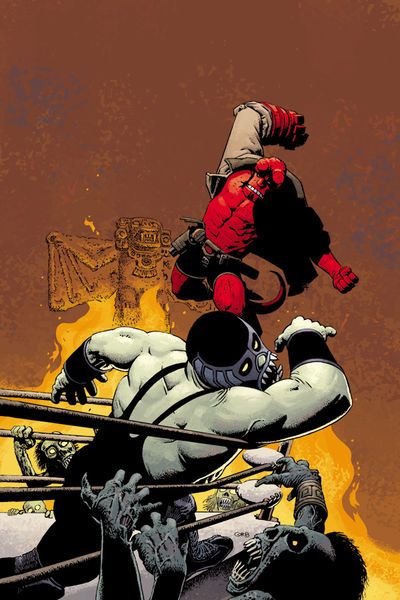 Hellboy in Mexico. A one shot for Cinco de Mayo. Hellboy, Luchadors. Mignola and Richard Corben. 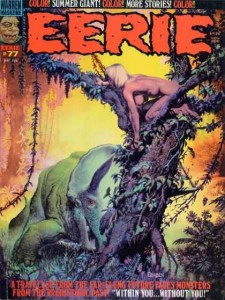 Corben is one of those guys who does phenomenal work but is kind of like Keyser Soze. He comes in and HOLY CRAP and then POOF, he disappears. He is a true master of the comic art form. His style can change from simple to detailed, super heroes to fantasy to sci-fi but yet it all seems undeniably Corben.

I first encountered Corben’s work through the first Heavy Metal animated film when I was in high school. It was kind of an accident really. I watched the movie with a bunch of friends and realized during the credits that some of the people involved were comic book people (specifically Bernie Wrightson) and I began to research Corben’s work. 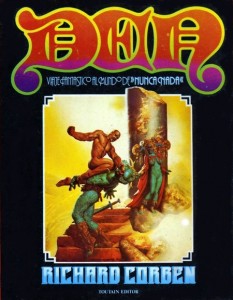 I managed to dig up some reprints of his Warren Publishing work and then his creator owned work on Den.

For those of you unaware, Den is kind of a mix of John Carter from Mars, Conan and other pulp fantasy work. Yes, there is sex and full frontal nudity but the story tends to be pretty interesting filled with action and humor.

I’m not sure what’s specifically drawn me to Corben’s work over the years other then you know it’s a master at work. Much like Kirby, Ditko, and Eisner, the minute Corben touches pen to paper, the magic begins. It doesn’t matter what he draws, it just seems like it came from thin air.

Looking back on it, for years I was drawn to the cover of Meat Loaf’s Bat Out of Hell album. It’s a beautiful piece that I had no idea Richard did until years later. A barbarian on a motor cycle breaking free from an evil tower. One image tells a whole story without listening to a single sound. That’s the kind of power Richard Corben’s work has.

The unfortunate part is a lot of Richard’s self published work is currently unavailable. I keep hoping Heavy Metal or IDW will reach out for a deal and get this fantastic art back in print and back to fans, but so far no dice. Given the current popularity resurgence of popularity in Conan, I’m boggled why there isn’t an omnibus of Den. 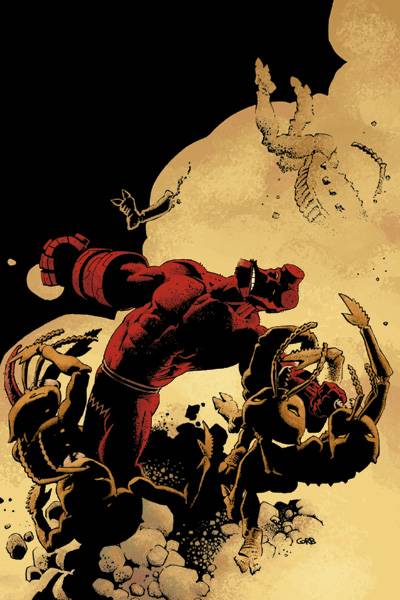 In the meantime, Corben seems to have found a great collaborator in Mike Mignola. I’ve often talked about how when an writer and artist really gel, it seems more like the work of one person. Such is the case with Mignola and Corben. This might be due to the obvious Corben influence on Mignola’s own pencils but either way, Hellboy doesn’t seem to far off from a Corben creation. The two had previously worked together on Hellboy: Mokama with great success so there’s no real surprise at how awesome the collaboration is the second time around. Richard’s attention to detail is pretty evident in hellboy in Mexico. I’m a big fan of pro wrestling and I’m pretty familiar with the Lucha style of wrestling. From the costumes to the moves, Corben obviously did some research and breathed not only life into these characters but a bit of added depth for readers who are familiar with Mexican wrestling.

For those of you who are interested in Richard Corben, there is a selection of his modern work available. I’d start with his work on Hellboy and his brief run on Hellblazer (written by Azzerello) and the Cage Marve MAX mini series as well as his two Haunt of Horror books for Marvel.

And Dark Horse, if you’re reading, maybe Corben on Soloman Kane for a mini?