For the most part, I like Mark Millar’s writing.

I’m a big fan of his run on The Authority and the first run on The Ultimates. I enjoyed Kick Ass and thought Old Man Logan was great.

But I’m not really interested in his new series Nemesis.

The whole premise of Batman-if-he-was-a-bad-guy doesn’t hold much interest to me because it’s been done before and done really well. It was a character created by Matt Wagner and it was called Grendel. 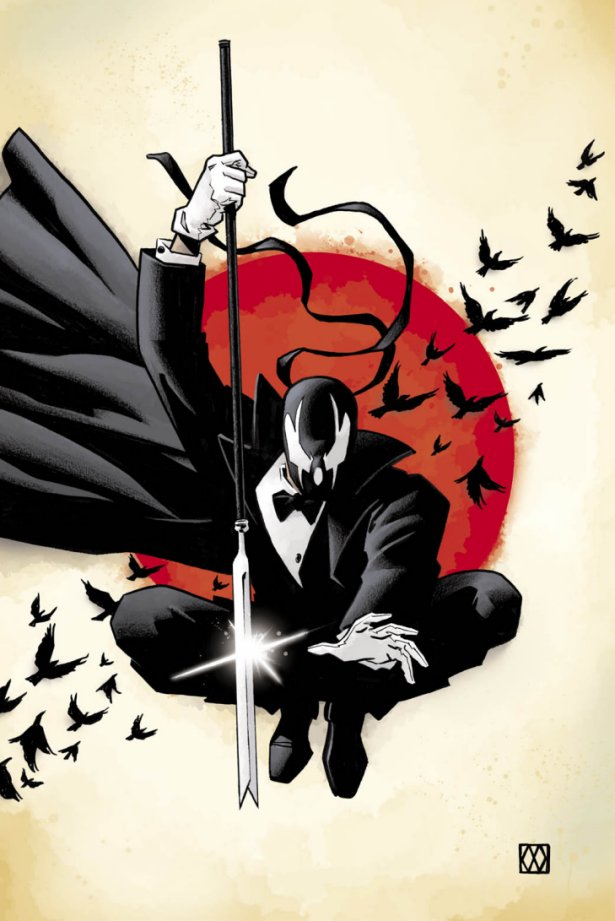 I know what might be going through the minds of a lot of you out there.

“I thought he was a Batman villain?”

“Wait? Isn’t that the thing that fights Beowulf?”

“No no no, it’s a drug that helps create a religion.”

And the truth is, all of these with the exception of the Beowulf comment are correct (well technically the Beowulf one is right but has little to nothing to do with Wagner’s Grendel). Matt Wagner took an intriguing concept and managed to turn it into a series where he can do pretty much anything with. But the character that started the ball rolling was the first Grendel, Hunter Rose. 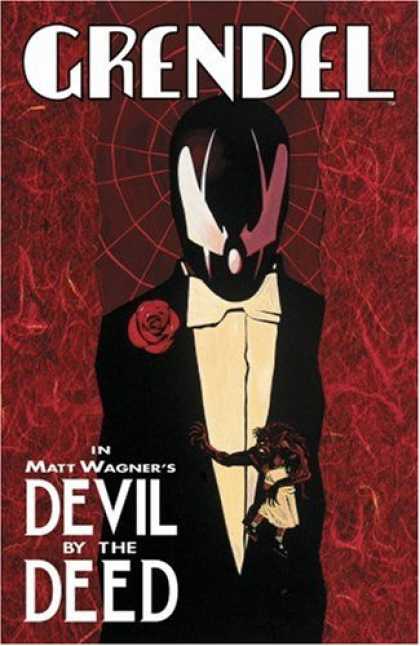 Hunter started off as an incredibly brilliant and gifted person named Eddie. So awesome was Eddie that he got bored. He was a world class fencer who threw a match just because it was too easy. He met and became involved with a woman named Jocasta Rose. After she died from an illness, he set about a new course. He adopted her last name into his own and took the first name Hunter. Wrote a number of best selling books and slowly adopted another persona. A masked assassin named Grendel who began taking over the underworld.

The Hunter Rose iteration of Grendel is very much a bad Batman. He’s smarter then everyone and honed his physical skills to a peak that is above most normal people and even a match for a creature or two of supernatural abilities. But unlike Batman, he terrorizes the underworld to control it and even then it’s not so much out of evil or greed but due to boredom. It’s the challenge Hunter likes. He even takes on a young ward of sorts, the daughter of a gangster Grendel murders. It’s here we see something really interesting that Wagner manages to capture very well. Stacy (the young girl adopted by Hunter) seems to be his only vestige into something not for himself. The scenes with her are played so well that it’s like Hunter’s a different person with her but still the same character; kind of like Hitler when you see him play with his dogs; yeah we know he does horrible things but look at how human he looks when playing with a dog.

By the way, Hunter dies in his first comic book outing.

It’s kind of a spoiler but not really. In fact death hasn’t slowed down his appearances but we’ll get back to that later. 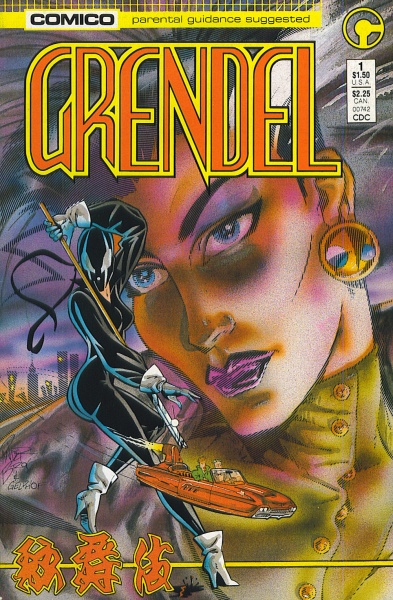 After Hunter, next up with the Grendel mantle was his grand-daughter (Stacy’s child) Christine Spar. Christine writes a book about Hunter Rose and has her son is kidnapped by a kubuki vampire.

See here’s the thing. Matt Wagner did something really interesting with Grendel when he brought out the second version of Christine Spar. He started making Grendel more of a force then a person. In the case of this story line and the subsequent stories featuring Spar’s boyfriend, Grendel becomes more about obsession, aggression and escalation. Now that’s not what they’re only about but those are major themes that play out through a lot of the books.

This is followed by a brief return to the Hunter Rose era. Yeah him again…but we’ll get back to that.

And then we see Grendel become another word for the devil. The he returns as a man to fight a corrupt world dominating Catholic Church. Then the idea of Grendel becomes kind of a religious military clan state thing. And then we see more of that future landscape including the hulking Grendel-Prime cyborg.

And then we go back to Hunter Rose where he squares off against Batman…. just hold on, I’ll tie it all up at the end, I promise.

And from there we go back to the future Grendel world where Wagner opened the doors to other creators through a series called Grendel Tales. We see various places of in this world and various ideas on what it means to be a Grendel. All the while Grendel-Prime is featured in a back-up story that eventually leads to the cyborg meeting up with Batman. And then after that we finally find out more about what happened to Hunter’s young charge Stacy in what is one of the best comics ever written, Devil Child. And then we meet up with Grendel-Prime again this time in the form of an illustrated novel written by Greg Rucka, art by Matt Wagner.

And THEN we go back to Hunter Rose with an anthology series done in a black, white and red color scheme. And we even get a whole new mini-series starring the character who died in his first graphic novel. 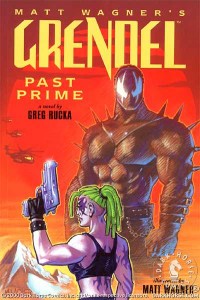 While I’m sure it’s not what he originally intended, with the Christine Spar storyline, Matt set up a world where anything can happen. And not only that, some of you writers may want to take note out there, he did this while not messing up his own continuity.

He left wide open sandboxes to play in. Let’s take Hunter Rose for instance, the character he keeps going back to the most. Hunter dies in his first book and in such a way that he is more then likely, not coming back. But Wagner already established the character had been around for a while by the time he dies but isn’t really specific for how long. So there you go, any time Matt feels he has another story to tell, he has more then enough wiggle room to fit it in there. Same with his future Grendel world. He only covered a small part of which allowed other creators to cover a bit more in Grendel Tales. Then with the second Batman/Grendel crossover, he even created another future that’s in the future of the one he had already introduced.

While I’m sure it wasn’t Matt’s intention, like I doubt the man sat around saying “You know what, if I do this this this and this, I can do whatever I want whenever I want and always have a comic book to fall back to” but I’m sure it has dawned on him from time to time.

On a personal note, I’ve loved Grendel for years. 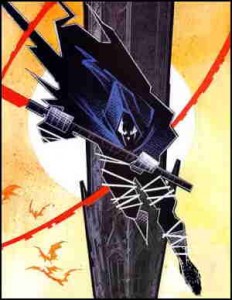 While Matt’s other work is always good (check out his run on Zorro for Dynamite and the older Sandman Mystery Theater from DC) and I’ll usually pick up, Wagner’s Grendel and Mage books have very dedicated fans and I am one of them. For the most part, Grendel is an instant buy for me ever since I read the first Grendel/Batman book. That one crossover brought me into Grendel’s world and it hasn’t let go. After that I picked up every trade that was available at the time, back issues all of the Grendel Tales that had been published and put the future ones on my pull list, I bought a lithograph (one of only two comic book pieces of art I own) and even the original Comico Christine Spar story arc despite the fact I had it in trade. My signed copy of Devil by the Deed is one of my favorite things in my collection as is my Grendel-Prime sketch done by Wagner at a convention in Toronto.

In fact, Grendel is my first attempt at an entry to the publishing world. I loved Grendel Tales enough to take a stab at writing one. I was so green at the time, I didn’t even bother inquiring to Dark Horse’s submission policy, I just put together a package and sent it off thinking I’d be hired of the bat. Luckily, Jaime S. Rich (then in editorial, now an awesome writer in his own write) took the time to send me back a short letter explaining they weren’t taking any more Tales submissions but if they were I’d have to use the following format guide.

I actually found a copy of that package the other day. Matt Wagner, if you’re out there reading this, it still has a killer idea in it and I’d write the series for a quarter.