Welcome to yet another ComicBookDaily.com Convention report. This time around we’re looking at the dealers and throwing in some miscellaneous pictures and comments! Those of you who want to check out our other reports on the con can find them here.
Let’s kick things off with Wes Hagan from Haganland. 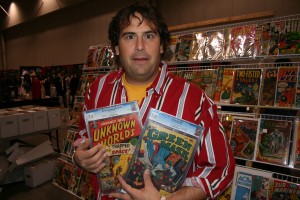 Wes was probably one of the biggest dealers space wise with his setup taking up like 20 odd tables in a square tucked away in a corner of the con next to the wrestling.

Wes had a pretty strong weekend despite the attendance. For the first time, he had a section of high grade books specifically labelled as “CGCable” of cherry picked books by Wes for those who can’t be bothered to dig. Big sales of the weekend include: HG runs of raw Dell File Copies and Popular Comics in the 50-150 range, High Grade Silver Age Marvels in the 20-50 dollar range and DC titles such as JLA and Detective. Specific notable sales include a Captain Marvel Adventures in 9.0, as well as a Green Mask 9.0 Fox Book. His $1 dollar bin sales were oddly stronger on the Sunday on the Saturday, possibly due to attendees trying to fill in some last minute holes due to not finding their picks elsewhere. When asked about whether or not he would come back for next year’s show, Wes answered with a definite yes.

On a side note, attendees of the convention may have noticed a fan dressed up as Batman from Batman Beyond on the Saturday and Robin on the Sunday. A little bird tells me that a certain eccentric dealer saw Batman toking up outside the convention with the aid of another person who had to hold up Batman’s cowl while he sucked on a joint. Just one of those great comic book convention moments. 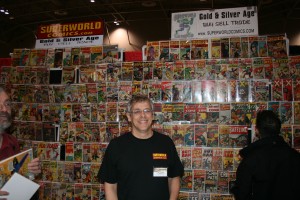 Ted of Superworld Comics was gracious enough to spare a few minutes from his busy booth to gab about the weekend sales as well. Superworld had a good consistent weekend keeping them busy all throughout. Notable sales include a Daredevil 1 raw in fine+ going for $1500. Aside from that, Superworld just had strong sales across all avenues. High grade Silver Age was in demand as to be expected with a little bit of Golden Age mixed in there. Surprisingly the gap between Marvel and DC sales narrowed by a wide margin with the usual 10 Marvel to 1 DC ratio dropping down to 2 Marvel to 1 DC. Most requested book for Superworld this show was Amazing Spider-Man #129 which was a surprise as the most requested is usually Hulk #181. When asked about doing the show next year, Ted said that he would be willing to do the show again though crossing the border is always an exercise in frustration for him. When asked to elaborate on this; Ted mentioned the massive amount of paperwork needed to cross the border with merchandise, the amazingly high arbitrary custom fees and the monopoly that is Livingston; the brokerage company that is required to facilitate the crossing. What makes it worth it to Ted despite all of this hassle? In his own words: “all the eye candy!” Rock on Ted, rock on. 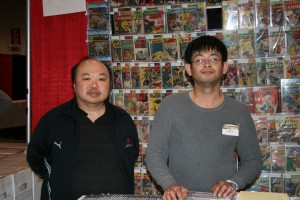 Harley Yee is the man who needs no introduction to you comic collectors out there. Like many of the larger established dealers out there, Harley had steady good all around sales for the entire weekend. Notable sales by Harley for this show include: An X-Men #1 for 800, two Hulk #181s a VF+ which went for 1100 and an F- for 450. The most requested book at the show was Iron Man #1. Strong sellers for Harley at this show were CGC Marvel #1’s, Timely’s in low to mid-grade and DC’s were strong bin sellers. According to Harley; the numbers of collectors at the show was small but those that were there had their wallets open and were ready to spend. Collectors were walking away with small stacks in their hands even if they weren’t picking up big name books. I didn’t manage to get any specifics on what Harley picked up at the show himself, but it seems that he did make a few dealer purchases himself. It looks like Harley is definitely up for doing the next Wizard World Toronto show as well. Just a heads up that Harley will not be attending the two-day show put on by Hobbystar in June though.

Monte Cohen of Buyingandsellingcomics.com didn’t have the most spectacular weekend in sales. For the guys at buyingandsellingcomics.com, their experience was described as “mediocre and barely worth the time”. For them, they saw the convention as not heavily focussed on comic books so much as it was on general celebrity and the guest list was not very comic focussed especially in the SA/GA era. Bookwise; raws were trumping slabs with people either going for the very high grade to upgrade or going to the low grades to fill in runs with few in the middle. Notable transaction for Monte included a Weird Science #1 CGC 3.0 which went for $400.

Girasol Collectibles is another online outfit that doesn’t have a brick and mortar location that came out for the show. Girasol doesn’t specialize in comic books per say, more like comic collectables with pulps, a few comic collections here and there and some original art. Girasol reported a rather weak show with their main notable sale being a Spider-Man Newspaper strip original going for about $400. They’re currently unsure about whether or not they will return next year.

Martin Lavalee is a private collector who set up at the show with nothing but a whole crapton of slabbed books. Martin had a strong consistent weekend with bargain priced slabs flying out of his bins. Pricing books with an aggressive attitude to move them helped Martin to get enough sales to warrant coming back again next year. 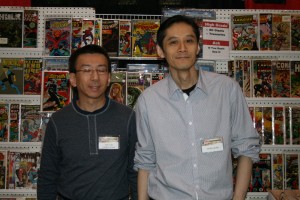 Danny Wong is another private collector who set up at the show. Unfortunately, the show turned out to be somewhat of a bust for this crew. They described traffic as slow and the guest list of not being up to snuff, especially with the loss of Eliza Dushku. Notable sales for the guys at Danny Wong were: ASM #129 in VF for $300 and a Weird War CGC 9.0 for $300. Bin sales weren’t too strong as not too many run fillers came around except for Deadpool fans who scooped up 4 copies of New Mutants #98 from them. A return to next year’s show seems unlikely for these guys.

There were a number of great artists in the Artist’s Alley which provided attendees with great possibilities for sketches. Some of the great guys there included: Adi Granov, Ken Lashley, Dale Keown, Cameron Stewart, Ray Fawkes, Marcus To, Marcio Takara, Stuart Sayger and a whole ton more.

A quick price breakdown for some of the artists:

Adi Granov: Free but he used a ticket system as he could only do a limited number of sketches a day

Stuart Sayger: $150-200, Stuart had some kind of pay what you want and he’ll put in that much effort system

That’s all for now, but check back in with us as our final pictures and impressions hit the site real soon. We promise!