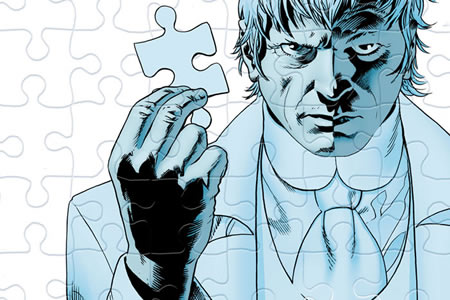 Last week was a little bitter-sweet for me in terms of comics. I arrived to the comic shop to find the last trade of Planetary, waiting for me in my pull box. It was an excellent read but something interesting happened. After I had finished the trade, I was talking to my girlfriend Gen. Gen’s a comic and manga fan (not to mention attractive and smart, yup I got real lucky, my secret? Constant narcotics into her cereal every morning) but she’s hasn’t been reading them quite as long as I have and there’s a number of titles she’s missed out on (for instance, I got her hooked on Preacher) so she asked me what Planetary was about.

Turns out Planetary is a bit hard to describe. 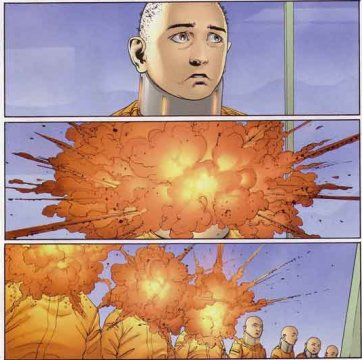 When I boiled it down, Planetary is probably best described as an exploration into popular comics characters while twisting them with a bit of sci-fi and a conspiracy filled plot.

That statement is kind of boring and does not do the series justice, it’s just the best I can really come up with. It’s kind of like a Swiss timed pocket watch. So many parts all moving seamlessly making one well oiled perfectly timed machine. Warren Ellis managed to create a series that allowed him to do almost anything with superheroes even the really popular ones not owned by DC. The Shadow, Lone Ranger, Doc Savage, The Fantastic Four, The Hulk, Galactus and a few others have all made appearances in Planetary… a little disguised but they are in there. And by a little I mean for the most part some of these character are disguised in nothing more than Groucho Marx glasses and mustaches. This has allowed Ellis to tell an interesting story in a comic book landscape without have to sacrifice anything to editorial concerns. 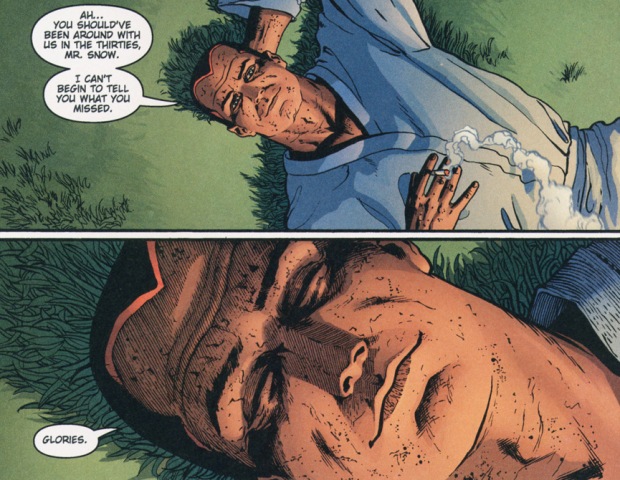 And the storytelling is fantastic.

Each issue of Planetary essentially features two things. The first is the mission the Planetary team are on. Usually the mission is a mini comic book essay on a style of comic or type of character that are popular in comics. Within that framework there is also the story about the Planetary team itself. The main thrust of the entire series is about main character Elijah Snow trying to discover who the Fourth man in the Planetary organization is and the ongoing feud against The Four (an incredible Fantastic Four analogue where they are really evil). This technique never feels like a comic in a comic, it just feels organic. The series is also my favorite of Ellis’ work due to it’s general feeling of optimism. There always seems to be a great hope for humanity in Planetary that seems to lack in Ellis’s other work. Beyond the writing, there is also the art.

John Cassaday is by far one of my top five artists in comics. There is something about his style that is perfect for any type of comic that has action. I’ve spoken before about his work on X-Men on my podcast but Planetary is where he gets to really cut loose. Jungle scenes, outer space, superheroes, Dracula getting his frozen naughty bits kicked off, the art requirements and variations on the series are huge and Cassaday met and defeated every challenge with resounding victory. But honestly, Cassaday is only part of the art equation. Coloring is often overlooked in the comic industry but on Planetary, Laura Martin’s work was exceptional, between her choice of color palette and her over all skill, Cassaday and Martin became a team much like the artist/inker teams of the past. While Cassaday did the lion’s share of work, the book would have felt much different if Martin had not come on board. 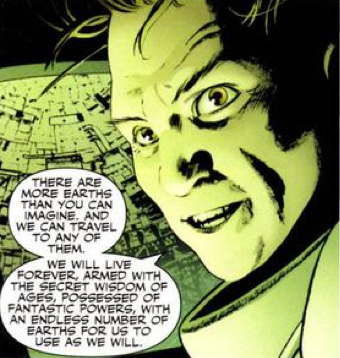 Lasting 27 issues and a few crossovers (the Planetary/Batman crossover features one of the best set of takes on Batman ever), Planetary is a great read start to finish. And I must warn you it does end. It was a bit of an ending where I am definitely wanting more Planetary but at the same time the end was fitting and I don’t need more. Kind of like when The Sandman ended. I really would like to know more about what goes on afterwards but the ending was great and no more really needs to be said. That being said if Cassaday and Ellis want to get the band back together (much like how Gaiman will occasionally dip his toes back into the Endless universe), I will be there for the ride. Hell, even if they want to explore some of the side characters. I would murder hobos and lay them at Warren’s feet for a chance to write a Dead Ranger mini series.

If you have yet to give this series a try all five trades are now out…and it is the holidays, maybe someone might pick them up for you.